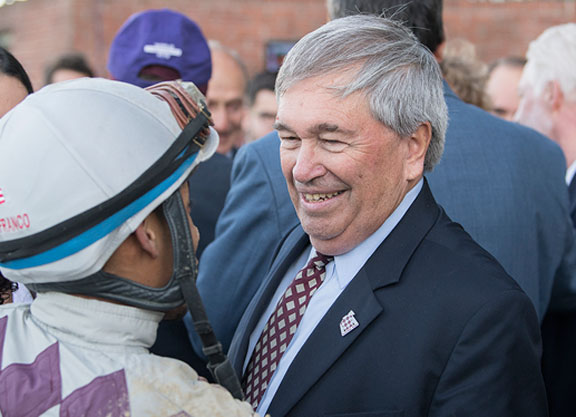 Seventeen years ago, Jack Knowlton's band-of-buddies Sackatoga Stable took the racing world by storm when their “gutsy gelding” Funny Cide (Distorted Humor) upset the GI Kentucky Derby before adding the GI Preakness S. and becoming one of the most popular horses of his generation.

Things look much different for Sackatoga these days, with almost all new faces, but Knowlton remains the constant, and now he and his partners have another top Kentucky Derby contender to get excited about in GI Curlin Florida Derby victor Tiz the Law (Constitution). Knowlton joined the TDN Writers' Room podcast presented by Keeneland with hosts Joe Bianca and Bill Finley Wednesday as the Green Group Guest of the Week to talk about possibly rekindling the Derby magic.

“It really is totally different because as you remember, Funny Cide was a New York-bred–as is Tiz the Law–and he was also a gelding. There had never been in New York-bred to win the Kentucky Derby. There hadn't been a gelding since 1929 when Clyde Van Dusen did it. So the fact that he beat New York breds

in three races as a 2-year-old didn't really get anybody's attention,” Knowlton said. “With Tiz the Law, he won

impressively, broke his maiden at Saratoga and then jumped up and won the Grade I Champagne in October at Belmont. So when that happened, all of a sudden, he was on everybody's radar screen.”

Much of the conversation with Knowlton focused on the peculiarity of this year's Derby trail, with suddenly five months from the Florida Derby until the Run for the Roses, instead of five weeks.

“Everybody thinks that he's one of the ones that should show up on the first Saturday in September. Which sounds really strange,” Knowlton said.

As for the plan to get Tiz the Law to the new Derby date, Knowlton deferred to longtime trainer Barclay Tagg, saying, “Barclay's a firm believer that when you have a horse in a routine, you keep him in a routine. And it's worked perfectly except for just a little, little bump in the road he had about five or six weeks ago where he had a little bit of an issue with one of his hoofs after he threw a shoe. But other than that, after he won the [GIII] Holy Bull, we gave him a little lighter next couple of weeks, didn't have to work him. And that's what I expect we'll do.”

Elsewhere on the podcast, which also featured regulars Jon Green and Brian DiDonato and a new video component via Zoom, the crew discussed the impact coronavirus is having on the racing calendar in the West Point Thoroughbreds news segment, reminisced on their favorite horses of all-time and talked about the personal silver linings they've found in social distancing and staying home. Click here to listen.