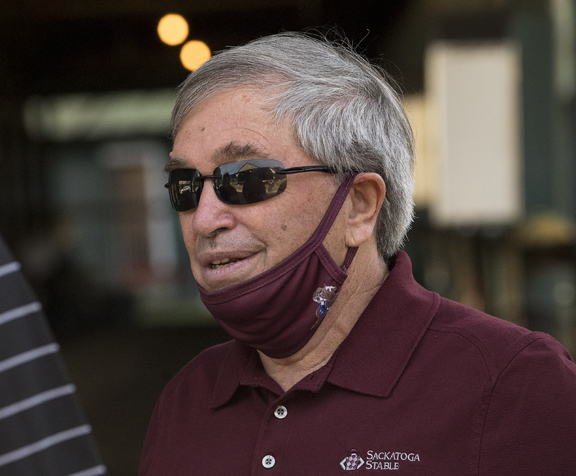 Fresh off of a powerhouse victory by his Sackatoga Stable's Tiz the Law (Constitution) in Saturday's GI Runhappy Travers S., Jack Knowlton joined the TDN Writers' Room presented by Keeneland Wednesday morning to talk about the imposing GI Kentucky Derby favorite. Calling in via Zoom as the Green Group Guest of the Week, Knowlton also discussed the deal struck with Coolmore to stand Tiz the Law at Ashford Stud, how much it meant to be in attendance for the Barclay Tagg trainee's Travers victory and whether or not this renewed success will compel Sackatoga to expand its operation in the future.

“Barclay and I have always felt very strongly that he is absolutely a mile-and-a-quarter horse, that he would thrive [at that distance],” Knowlton said. “You look at his breeding, you look at his performance, particularly in the Florida Derby, he certainly appeared to be a horse that would have no problem with the distance. Now we have the luxury, which has never really happened before, to have a mile-and-a-quarter prep going into the Kentucky Derby. That is a big step.”

Tiz the Law remains undefeated as a 3-year-old, winning all four of his starts over a span of over six months starting with the GIII Holy Bull S. Feb. 1 and adding victories in the GI Curlin Florida Derby Mar. 28 and June 20 GI Belmont S.

“I think the training job that Barclay's done, having this horse sharp from the end of January to early August is phenomenal,” Knowlton said. “After the Florida Derby, we didn't know when the next race was going to be, where it was going to be or what it was going to be. And the fact that Barclay kept him in training and did what he had to do to have him ready off an 11-week layoff going into the Belmont, that to me is a tremendous training feat. Now we get the opportunity to really have an easier road with four weeks between the next two races. He came out of the [Travers] great, I was over there this morning and he certainly looks like a fresh horse.”

Knowlton was asked about the stallion deal he struck with Coolmore to stand Tiz the Law, and noted that he insisted on two contingencies before signing off on it.

“I said, number one, no racing rights are going to be available. Number two, he has to be able to run through the end of his 4-year-old year, as long as he's sound and healthy and running the way that he's been running.” Knowlton said. “Only one other partner went through the Funny Cide experience with me of the 33 partners. This is, for them, probably the best that it's ever going to be. I didn't want it to have to end, because there are still some mountains to climb as a 4-year-old. And I wanted to do it for the game, quite honestly. An awful lot of the top horses, you see them not even their whole 3-year-old year and they're gone. And that's not good for the game.”

Back when Knowlton was last on the Writers' Room after the Florida Derby, he remarked on how strange it felt not to be able to attend the race and instead celebrate from home. Saturday, he got to walk Tiz the Law into the winner's circle and rejoice with Sackatoga's–masked up–partners.

“It was tremendous. We were thankful that the state and NYRA were able to make that happen,” he said. “I've lived in this town for 34 years, and to have a summer with not having fans, it's really tough. But we were blessed to be able to be there to see, I think, one of the best performances ever in Travers, and I've been going to the Travers since back in the 70s. I missed one in 1981, and all the others I've been to. I saw Arrogate, which obviously, I think is the greatest of all time. But this one is pretty close. My biggest regret was that we didn't have 50,000 people there, and having a hometown horse to accomplish what he did with a crowd that would have been just going absolutely crazy.”

Elsewhere on the show, in the West Point Thoroughbreds news segment, the writers reacted in real-time to the specifics of Churchill Downs' plans for fans at the Derby and broke down the controversy surrounding the ride of the runner-up in the GI Longines Test S. Click here to watch the podcast on Vimeo and click here for the audio-only version.