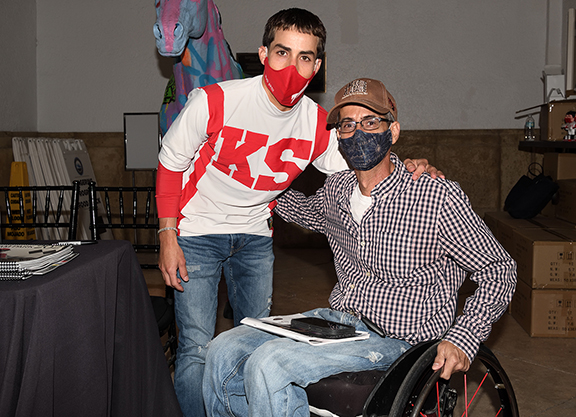 Jockeys and Jeans, in conjunction with Uncle Louie G's Italian Ices, an onsite Gulfstream Park vendor, raised over $22,000 for the Permanently Disabled Jockeys Fund Saturday March 13 through sales of the masked Irad Ortiz bobbleheads at the track and online.

Ortiz personally signed hundreds of the bobbleheads there, and Klaravich Stables, whose colors the bobblehead wears, made a substantial donation.

“To say this promotion was a success would be an understatement,” said Jockey and Jeans President Barry Pearl. “Irad Ortiz is not only a champion rider but a first-class guy who truly cares about his fallen brothers and sisters. He spent a lot of time with us preparing for this event. And the entire team at Gulfstream Park really came through for us as they have in the past, and we know they will in the future.”

Pearl and committee member Leah Whitsell, along with paraplegic former jockey Roger Blanco, were also on hand. “I want to thank all who helped and especially every one of those many hundreds who purchased a bobblehead,” said Pearl. “We are still getting orders from around the world.”

Jockeys and Jeans was founded in late 2014 by five former jockeys, and the all-volunteer group has since raised over $1.6 million for the PDJF, which makes monthly payments to over 60 former jockeys who suffered career-ending racing injuries.