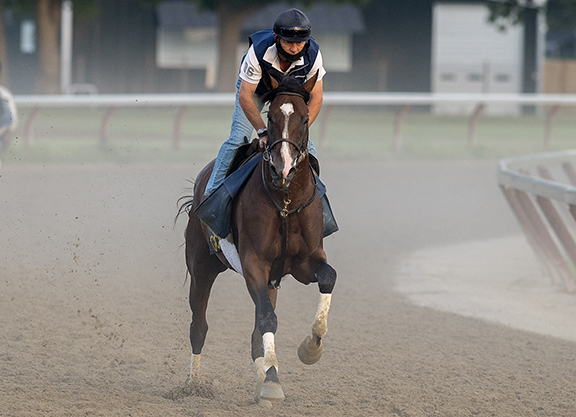 We're all guilty of it. A horse shows talent; we seek its source in the pedigree; and, however discouraging the initial sifting, eventually we pluck out some plausibly glinting nugget to brandish triumphantly aloft. “See! This proves there is a seam of gold!”

And that's fair enough. We all have a stake in the viability of selective breeding, albeit we don't actually want its outcomes to become too predictable. If the mysteries of pedigree were entirely transparent, the guy who buys the sale-topper would win the Derby every year and the rest of us would have to put our catalog notes in the trash, along with our dreams, and go home.

Perhaps that's one of the reasons why sensible horsemen should distrust any “system” or “formula” that purports to unravel the tangled clues, in pedigree and conformation, handed down by generations of horsemen. (Only one of the reasons, mind. The main one is that we know snake-oil when we see it.) Because we can no more afford everything to be computable than we can everything to be chaos.

Nonetheless the belief that pedigrees have some kind of underlying coherence will tempt us all, from time to time, into convenient but unwarranted extrapolations. A lot of people claim to find some alchemy in the blending of sire-lines. Some of us prefer to view a pedigree as a far more complex jigsaw, arguing that sire-lines “branded” by stallions in the third (or fourth) generation are combined not just with each other, but with another six (or 14) equal genetic contributions. In every case, however, we all tend to “explain” a horse's athletic brilliance by picking and choosing such “evidence” as suits our own theories.

The fact is that you can't bake a pie with an apple apiece from eight different orchards, and then credit the overall taste exclusively to one or two particular apples.

That's why I'm skeptical about anything that governs a mating beyond the basic equilibriums: complementing physical types, most obviously; and performance traits, depending what you are trying to achieve; and then, underpinning all that, as seamless a spread as possible of genetic quality. If the 16 names in the fourth generation represent 16 strands of gold, it won't matter which ones filter into a foal: they're bound to be gold.

On the face of it, you couldn't ask for a more exemplary case than Decorated Invader (Declaration Of War), who lines up for the $500,000 Saratoga Derby Invitational Saturday looking like the most exciting grass sophomore in the land. To a traditionalist, it's gratifying to see such undiluted class percolating through his family tree. If he can maintain his progress, and earn a place at stud, he'll be a conduit for maternal genes of authentically historic resonance.

On paper his dam, a daughter of Arch named Gamely Girl, has one of the tightest broodmare pedigrees you could hope to see today. The eight mares in her fourth generation naturally include four who produced sons good enough to be stallions: specifically, the dams of Northern Dancer, Seattle Slew, Danzig and Roberto. The other four include three glorious names: Courtly Dee and the famous Claiborne sisters Thong and Moccasin. Courtly Dee, among numerous other distinctions, is the third dam of Arch; while Gamely Girl's dam is by a grandson of Thong (in Nureyev) out of a grand-daughter of Moccasin. (That grand-daughter, incidentally, is GI Santa Anita Oaks winner Hail Atlantis (Seattle Slew); who is also the dam of that venerable Storm Cat stallion, Stormy Atlantic.)

As for Decorated Invader's sire, he had barely got started before being sent to Japan (already the third market he has tried) with a Classic winner in France already under his belt; and himself has a fine pedigree, by War Front out of a half-sister to Union Rags.

But is even all this-even this copper-bottomed foundation, spreading behind Decorated Invader's immediate parentage-just another example of reversing the principles of empiricism; of making random facts retrospectively fit a given prejudice?

Anyone, surely, can accept that such aristocratic antecedents might have some role in his flowering. At the same time, however, we have to acknowledge that neither Gamely Girl or her dam have hitherto come up with a top-class performer or producer. Not all the sires to have entered the mix, naturally, proved to be terribly effective. And Gamely Girl has produced one other stakes winner; while her own siblings include a winner of listed sprints in France plus a champion, a 30-time winner in fact, in..Puerto Rico. But the bottom line is that until Decorated Invader, there has been a two-generation hiatus in terms of elite caliber.

So why should that be? The answer, of course, is precisely that this remains-and hopefully always will be-the most inexact of sciences. Some people talk about genetic influences lying “dormant” for a generation or two, as though this too were some kind of observable “rule”. Essentially, however, it's always a flux. And that's the whole fun of it all.

There are many strands, for instance, that could together account for the rise of Leslie's Lady (Tricky Creek) [https://www.thoroughbreddailynews.com/8-2-million-reasons-to-spread-genetic-credit/] as perhaps the greatest broodmare alive today. Among those who like to reduce things to predictable patterns, however, very few have been prepared to explore the apparently disobliging names behind her.

Decorated Invader, by contrast, would seem a pretty easy horse to “explain”. It's not as though the pedigree had dried up: besides those couple of stakes horses floating around the page, Gamely Girl is one of no fewer than 10 winners out of her dam. Even so, there has clearly been ebb and flow. And so there should be. Have all the matings, along this particular branch of the family tree, scrupulously observed the basic priorities: matching mates physically, and so on? How many different programs do they represent, and how wide a spectrum of horsemanship? And how many mishaps may have intruded; how many of the unlucky breaks that can undo, in a split-second, all the patient work of even the most skilled and seasoned custodians?

One such, Christophe Clement, has this summer sampled the ups and downs of his calling with exceptional giddiness. Even on the June day he lost those 10 horses on the New Jersey Turnpike, in a horse van fire, Clement won two races-including a stake with, of all animals, one bearing the name Therapist (Freud)! As it happens, Clement calls the long wooden seat outside his Saratoga barn his “therapy bench”. Happily, just when he needed it most, he has been enjoying a spectacular, life-affirming meet. And Decorated Invader looks eligible to pin many more medals on his chest.

Never mind apple pie. Where Clement comes from, they use the apples for cider and Calvados. And while horses are no less certain a harvest, the same principles apply to both. Maintain the orchard. Hire the best help. Take your time. Go with Nature's hints.