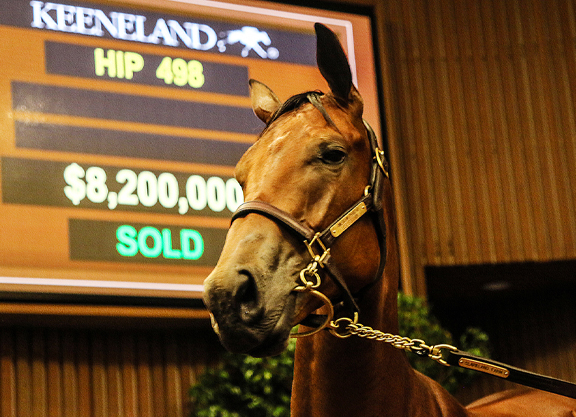 Nice to see that the people who count–the ones who actually spend the dough, that is, as opposed to impudent bystanders who tell them how much better we could do it–don't have time for that glib prejudice against older producers, whether mares or stallions. In making the daughter of a 23-year-old mare the most expensive yearling filly in Keeneland September history, however, they set a far more significant challenge to assumptions that are shared a good deal more widely.

In fact, you might say that the $8.2 million paid for Hip 498 last week requires professional horsemen everywhere to ask fresh questions of themselves–above all, if they are in the habit of relying on anything purporting to be a 'system' or formula.

No doubt some people will try to persuade you that Leslie's Lady has produced Into Mischief, Beholder and Mendelssohn because her own genetic contribution has been upgraded respectively by two grandsons (Harlan's Holiday, Henny Hughes) and one great-grandson (Scat Daddy) of Storm Cat. (Two of them, indeed, through the same son of Storm Cat, Hennessy.) But we still await coherent justification for simultaneously treating the influence of Mendelssohn's 15 other great-great-grandparents as too infinitesimal to be relevant.

Happily, the extraordinary contest for her daughter by American Pharoah, obviously from another sire-line altogether, shows due recognition for the merits of Leslie's Lady herself.

After all, it's not as though she can represent some kind of genetic void, meekly surrendering her 50% maternal stake in inherited material to a superior partner. So the big question is: whatever it is that she has brought to the equation, where does it come from?

Leslie's Lady is by Tricky Creek out of a Stop the Music mare. Her granddam was by One for All. These names are as left-field as–well, actually, as left-field as those of the sires responsible for the first three dams of American Pharoah: Yankee Gentlemen, Ecliptical and Tri Jet.

At a time when the industry is contemplating formal control of stallion books, perhaps these largely forgotten contributors can renew our respect for the potency of variegation. Admittedly the “hybrid vigour” famously sought by Bull Hancock was something he pursued by importing elite stallions from Europe, rather than by seeking outcross blood in New Mexico. But the principle is the same.

The ageing Tricky Creek had been transferred from California to New Mexico a few months before the Mitchell family of Clarkland Farm gave $100,000 for his 10-year-old daughter Leslie's Lady (in foal to Orientate) at her owner's dispersal at Keeneland in 2006. She had improved her original value ($8,000 short yearling, $27,000 September yearling) with a stakes success at two, albeit besides that bit of dash her principal virtue on the track had been hardiness: she made nine, 12 and seven starts across her three seasons.

This was consistent with such little distinction as Tricky Creek (himself a Grade II winner at two, three and four, through 37 starts) had achieved at stud–namely, as a source of exceptional soundness. One study, late in his career, placed him fifth among active national sires by percentage of starters-to-foals; and seventh, by starts-per-starter. That's pretty impressive, for an elderly stallion standing for $2,500 at Running Horse Farm, Albuquerque. So nobody should discount his influence on his granddaughter Beholder's rare achievement of winning Grade I races at two, three, four, five and six.

Though Tricky Creek obviously never earned much commercial opportunity, he was entitled to prove a conduit for class as well as toughness. His dam Battle Creek Girl (by His Majesty, whose other distinctions as a broodmare sire include Danehill) produced no fewer than 15 winners, six at stakes level. (One of these was Canadian champion Wavering Girl {Wavering Monarch}, subsequently dam of Grade I winner Military {Danzig}). And she was also a half-sister to the dam of the wonderful Soaring Softly (Kris S.), Tricky Creek's third dam being the Darby Dan foundation mare Soaring. You'll find Soaring in exactly the same slot in the pedigree of Saint Ballado (and therefore also of his brother Devil's Bag) and as fourth dam of Rahy and Singspiel.

At one point, in fact, Sheikh Mohammed gave $5.3 million for a Kingmambo half-brother to Tricky Creek as a yearling at Keeneland. So while he appeared to be on his way to oblivion by the time he reached New Mexico, aged 20 but without even 20 stakes winners, it remained perfectly feasible for the embers of his family's quality to be stoked by his progeny.

That process, moreover, is mirrored somewhat in the mare who gave him Leslie's Lady. Crystal Lady was by Stop the Music, who earned a long Gainesway career when awarded the Champagne S. at the expense of Secretariat, out of a half-sister by One For All to Grade I winner Roanoke (Pleasant Colony). Their dam was by the great Sea-Bird out of a highly accomplished runner in Patelin (Selima S., Alcibiades S., Schuylerville S.)–a name you'll find along the bottom line of several very good horses, including as third dam of GI Breeders' Cup Juvenile Fillies S. winner Pleasant Stage (Pleasant Colony) and fifth dam of I'll Have Another (Flower Alley).

On the face of it, with zero graded stakes winners close up, Leslie's Lady has had to make her own pedigree. In fact, she made her own appearance at the Keeneland September Sale as Hip 3567! Her dam Crystal Lady, acquired in utero in a transaction worth just $8,000, was diminutive, if correct; and apparently of such limited ability that she was once claimed for $5,000.

But the Leslie's Lady fairy tale actually has roots in plenty of good blood. I can't pretend to know precisely which genetic strands combined by Tricky Creek and Crystal Lady have entwined so productively in Leslie's Lady. But I do know that there is an overall mesh of quality, once you look beyond an immediate family that appears to corroborate the pedestrian status of the sires involved.

Just look, for instance, at the eight mares listed in her fourth generation. All four who owe their presence in the pedigree to sire sons were able to underline their class by a wider distinction. Quill, for instance, had earned her mating with Northern Dancer (which produced One for All) as a champion on the track; Flower Bowl produced not only Tricky Creek's damsire His Majesty but obviously Graustark as well; Shenanigans, likewise, was dam of Ruffian as well as Tricky Creek's grandsire Icecapade; while Nothirdchance, dam of Stop the Music's sire Hail to Reason, was a good enough runner to win the Acorn S. And the other four mares, as already noted, similarly include a couple whose merit has serial proofs, in Patelin and Soaring.

These eight mares' various partners, moreover, percolated Classic blood by the gallon: Darby Dan's European monsters Ribot and Sea-Bird, for instance; Northern Dancer, his father Nearctic, and his son Nijinsky; Turn-to and Tom Fool; and, the one curveball, Better Bee. He's pretty well off the map now, but a record of 20 wins in 89 starts looks very much like the seams mined by Tricky Creek for that trademark soundness.

One way or another, then, there's plenty of noble blood to be dredged across the whole channel. By all means, stick to your sire-lines–if you really think such a coarse tool can interpret the myriad genetic variations that cause even full siblings to be as very different as we know they can be. But remember that the man who bred Leslie's Lady, David E. Hager II, did so because he felt that the leggy Tricky Creek could help little Crystal Lady build up a foal. He plainly knew that a good match is, first and foremost, a physical one.

Of course, we can seek performance balance too. And the whole premise for spending all this money on the foals of Leslie's Lady is that something, demonstrably, works more repeatably in this particular genetic package than in nearly any other.

But that does not warrant extrapolating any cardinal rules about why that should be, beyond the single one acknowledged by all sensible horsemen–namely, that there are no rules.

That is no counsel of surrender. Ultimately, in fact, Leslie's Lady sets a wonderful example. She commends diversity. And she reminds us that the commercial failure of stallions does not necessarily neutralize the class latent in their genes. So long as the foundations are sufficiently wide and deep, qualities that lie dormant for a generation or two can still be revived by our instincts, our industry and–above all–our luck.