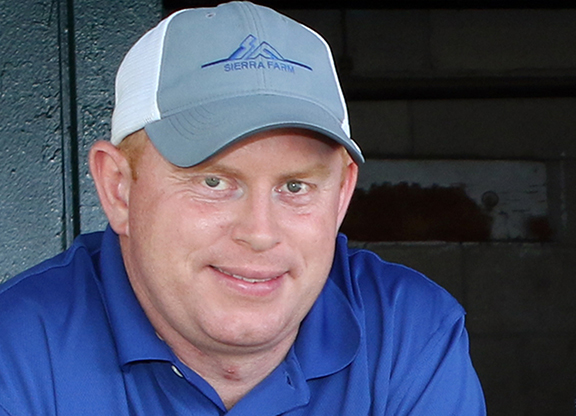 A filly by Into Mischief (hip 429) turned in the fastest furlong work of the week so far (:9 3/5) and a pair of juveniles shared the day's fastest quarter-mile time during Tuesday's third under-tack preview session ahead of next week's Ocala Breeders' Sales Company's Spring Sale of 2-Year-Olds in Training. A filly by Street Sense (hip 493), consigned by Pick View, and a colt by Runhappy (hip 1266), consigned by S B M Training and Sales, both covered the quarter-mile distance in :20 3/5.

Five juveniles have turned in furlong-works in :9 4/5 over the first three sessions of the seven-day under-tack show, but hip 429, a daughter of Into Mischief, was a tick faster with her breakout :9 3/5 work Tuesday. The filly is out of multiple stakes winner and graded placed Shanon Nicole (Majestic Warrior) and is consigned by Randy Bradshaw on behalf of her breeder, Sharon Hudon's Sierra Farm.

“She definitely exceeded all expectations,” Sierra Farm manager Michael Callanan admitted after the breeze show Tuesday. “Randy sent Sharon and me a text right when she was in the chute. And then the next text, I just said, 'Holy crap.' And Randy wrote back 'Yes. Holy crap.' I don't think even Randy thought she'd go that fast, to be honest with you.”

Sierra Farm began consigning yearlings under its own banner three years ago and had its first seven-figure yearling at the 2018 Keeneland September sale. Hip 429 was originally slated to be offered at Keeneland last fall, but was rerouted and is now among the first handful of juveniles the farm will offer at auction as 2-year-olds this year.

“She was a really nice filly as a yearling, but right before the sale, she came up with a little X-ray issue that was going to take some time,” Callanan said. “We entered her in the October sale, but we talked to Randy at September and he said, 'Mike, don't put her in the sale. Just give her the time and this will go away and it won't be an issue.' So we just gave her the time. We broke her on the farm and sent her down to Randy in December.”

Callanan continued, “She hasn't taken a backwards step. All we heard from Randy all winter long was just, 'This filly is an absolute tank' and 'She is a rocket.' Those were the only two words he used to describe her.”

“Ed Hudon went to the sale because he had heard the IRS were conducting a dispersal. He didn't tell anybody else about it until we all got a text message saying Sierra Farm just bought her,” Callanan said with a laugh.

“Her first foal was a Tiznow and we got $200,000 for him,” Callanan continued, “The Into Mischief is her second foal. And she has a Quality Road yearling who is probably our best filly on the whole farm. Keeneland were out here looking at her yesterday and they were very impressed with her. Unfortunately, we lost the mare this year. She colicked. But she blessed us with the Into Mischief filly and the Quality Road filly and we have her last foal, the Uncle Mo colt here. He is an absolute cracker of a foal. A beautiful colt she left us with.”

Also through Bradshaw's consignment, Sierra Farm will offer a filly by Malibu Moon (hip 1162) who is scheduled to work Saturday in Ocala. The 2-year-old RNA'd for $190,000 last September at Keeneland.

“She is a very different filly, she's got a bit of stretch to her,” Callanan said. “She was a Book 1 filly. She went through the sale and we couldn't get $200,000 for her. She is the last foal out of that mare. Both of these are really nice fillies and we're going to protect them a little bit. Hopefully, we won't have to worry about it too much with the Into Mischief filly, but definitely the Malibu Moon filly we'd like to protect her a little bit.”

Sierra Farm partnered with consignors Brandon and Ali Rice on a colt by Air Force Blue (hip 27) who sold for $390,000 at the OBS March sale. The chestnut colt had RNA'd for $95,000 at last year's Keeneland September sale.

“We couldn't get $100,000 for him at the sale,” Callanan said. “Brandon loved him and he came to us and we partnered up on her and we did very well with that.”

Sierra also partnered with consignor Michelle Hemingway on a filly by Violence out of Fontanne (Distorted Humor) who will be offered next week as hip 1041. Hemingway will also offer a Ghostzapper colt (hip 7) as part of the partnership at the upcoming Fasig-Tipton Midlantic sale.

“We want to keep the options open,” Callanan said. “It's good to have relationships with all these different people because then they will realize the horses we sell are what we say they are and hopefully they can do well out of it and we can do well out of it. If a 2-year-old guy really likes one of our horses and it's a little out of his budget and we don't sell it for whatever reason, we're able to partner up which is what we did with Michelle and Brandon and Ali. We definitely will be looking to do more of that going forward.”

“We stand by our horses,” Callanan said. “We are very proud of what we produce here on the farm. This year has been a good year. We want to keep doing that.”

While Monday's bullet quarter-mile time of :20 1/5 was left untouched, two horses shared Tuesday's bullet time of :20 3/5. Four horses have now hit that mark so far at the under-tack show.

A filly by Street Sense (hip 493) shared Tuesday's bullet quarter-mile work of :20 3/5. Consigned by Pick View, the bay is out of the unraced Special Thanks (Broken Vow) who is a daughter of multiple graded stakes winner Bedanken (Geri). She was purchased by Pick View for $22,000 at last year's Keeneland September sale.

A colt from the first crop of sprint champion Runhappy (hip 1266) also turned in a quarter-mile work in :20 3/5 Tuesday in Ocala. Named Happymac, the bay was originally entered in the canceled Fasig-Tipton Gulfstream sale. Out of True Kiss (Is It True), he is a half-brother to last year's GI Breeders' Cup Sprint runner-up Shancelot (Shanghai Bobby). He is consigned by S B M Training and Sales and was purchased by Bill and Corinne Heiligbrodt for $360,000 at last year's Keeneland September sale.

The breeze show continues through Saturday with sessions beginning daily at 7:30 a.m. The Spring Sale will be held next Tuesday through Friday with bidding commencing each day at 10 a.m.