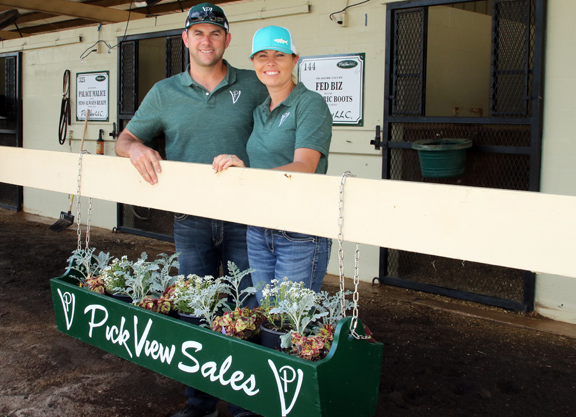 Joe Pickerrell and Courtney Roberts have seen their business as Pick View LLC grow steadily since they started their Ocala-based operation in 2011, and they enter the 2019 2-year-old sales season off their strongest year yet as consignors. They'll offer five juveniles–all colts–at next Tuesday and Wednesday's Ocala Breeders' Sales Company's March sale.

The couple met at the College of Central Florida while working towards degrees in Equine Business Management. Pickerrell, the son of breeder and trainer Bill Pickerrell, grew up on his family's farm in Ohio before moving to Ocala in 2007 to attend school and work for Joanne Crowe at Crowes Nest Farm Inc. Roberts, a Miami native, has a background in barrel racing.

Pickerrell had already started an equine transport business–Pick View Transport–while in college, and Pick View offered its first consignment of five at the 2012 OBS April Sale. That group grossed $374,000, including a $220,000 top-priced colt.

Pickerrell and Roberts have used the proceeds from that sale and subsequent ones to invest in both land and more horses.

“We purchased two farms in Ocala from proceeds from horse sales,” Pickerrell said. “We've been fortunate enough to have some really good clients who support us and trust us with their investments. Not only has that given us the opportunity to purchase a couple pieces of property, but it's given us the chance to grow our business in other ways.”

“It's an historic piece of property that a lot of champions have come off of,” Pickerrell said. “The ground is good, the horses do really well there and they're really happy there. It's just a good place for young horses.”

Past Pick View graduates include Big Changes (Midshipman), a $170,000 OBS April grad of 2014 who has won 10 times and racked up $522,000 in earnings. The graded stakes-placed veteran is a five-time stakes winner, most recently in January's Sunshine Millions Turf S. at Gulfstream.

“He's seven years old and still running,” Pickerrell said. “He's kind of sentimental to us, because he's a homebred for us, which is something we don't do a whole lot of, but we still own a lot from the family and it's nice to see him doing well for Brad Cox.”

More recently, Pick View sold its priciest horse yet at the 2018 March sale. Forloveofcountry (Sky Mesa) was an $87,000 OBS October pick-up who blossomed into a $300,000 pinhook score after a :21 1/5 move. Campaigned by Doubledown Stables and conditioner Jimmy DiVito, he broke his maiden on the stretch-out and switch to grass at Del Mar last July and annexed a main-track Churchill optional claimer in November. He takes on older foes in a lucrative two-turn allowance at Oaklawn Friday.

While Pick View has done well in terms of pinhooking profit, it also seems that Pickerrell and Roberts are leaving something left for the end users. From its 2018 2-year-old sales crop, 17 Pick View graduates started at two, and 14 were winners.

“We ended up around a 200% return on investment for our partners, and the results are speaking for themselves at the racetrack there, with horses that guys are able to go right on with,” Pickerrell said. “To have 14 different horses win 2-year-old races, we're pretty proud of that.”

Pick View has a crop of 30 2-year-olds altogether this season.

“The number of horses is similar compared to last year, but we focused on a little higher quality for this year,” Pickerrell said. “We invested a bit more money and tried to focus on some individuals who we thought were Classic kind of colts. We mainly bought colts this year–we didn't buy a whole lot of fillies–but we do have a couple of fillies going to the sales who clients sent us.”

What do Pickerrell and Roberts look for at the sales?

“We're looking for scope and substance in these colts,” Pickerrell said. “We want horses who are going to have the ability to perform on Saturdays when the races start to stretch out a little longer. That's kind of what we're excited about going forward from last year's crop, too–we feel like the horses we sold will be better as 3-year-olds, so the best might be yet to come from that crop.”

When asked about stand-outs among Pick View's March consignment, Pickerrell first mentions hip 325, a son of GI Belmont S. winner Palace Malice who was purchased for $160,000 at Keeneland September. The Feb. 4 foal is out of a full-sister to GI Breeders' Cup Juvenile Fillies Turf winner More Than Real (More Than Ready). His dam was a $400,000 Keeneland April 2-year-old herself and was an open-length Belmont Park maiden special weight winner later that season.

Pick View will offer another colt by a Classic winner in hip 432, a son of GI Kentucky Derby winner Super Saver out of a mare who was third in the 2010 Sam Houston Distaff S. behind the dam of superstar Arrogate (Unbridled's Song). The $150,000 KEESEP yearling hails from the extended female family of Grade I winners Speightstown and Mani Bhavan. Hip 432 will breeze Saturday.

“We've got a Super Saver colt who's really nice,” Pickerrell said. “He's out of a stakes-placed mare, he's Pennsylvania-bred and he's probably going to be the best-looking on the end of a shank. He's a very, very outstanding physical.”

Looking ahead to subsequent sales, Pickerrell said, “We're pretty excited about Miami–we've got a Tapit colt [at Fasig-Tipton Gulfstream] out of Enchanted Rock who's pretty special.”

The $190,000 Fasig-Tipton October pick-up is a half to GISW Verrazano (More Than Ready), et al from an extremely productive Emory Hamilton family.

When asked about overall expectations for the 2-year-old market, Pickerrell noted that buyers seem to have done their homework early this year.

“Just from interest at the farm, as far as before the sale goes, we had more visitors early this year than we've ever had before,” he said. “That's encouraging. People are calling and networking and trying to get out and see these horses at the farms, and that's a great thing, because a lot of these horses may or may not showcase themselves as well as they can at the sale for whatever reason. So, these guys who get to see the horses early at the farms, I think they have a leg up on the competition among buyers.”