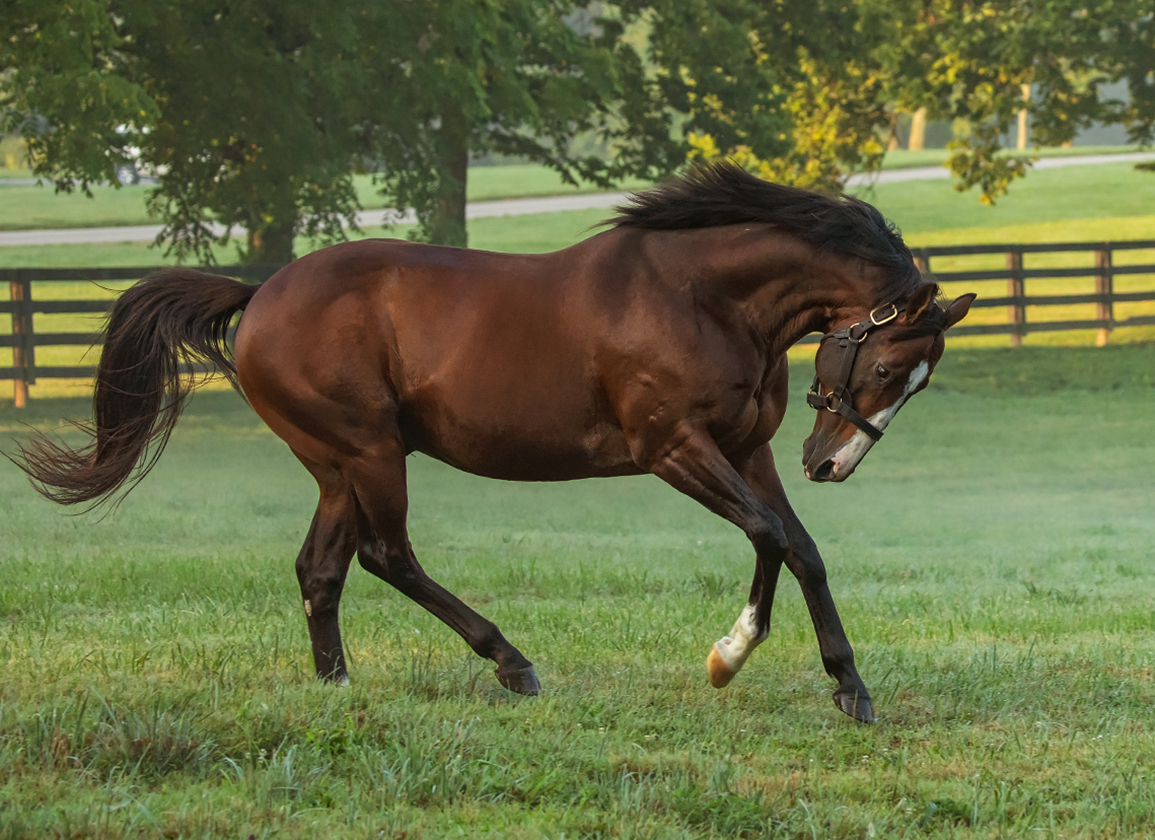 As both prototype and paragon for a whole new era in commercial breeding, Into Mischief can increasingly be measured only against himself. Last year, in retaining the general sires' championship he had won for the first time in 2019, the Spendthrift phenomenon became the first North American stallion to break the $20-million barrier in progeny earnings. He ended up on $22,507,940, bulldozing Tapit's 2016 haul of $19,914,317. Now, as an overlooked consequence of Breeders' Cup success for his latest star Life Is Good, Into Mischief has surged past his own record and by Thursday was standing at $22,929,735. He has meanwhile also raised another of his highest bars, 221 individual winners in 2019, to 237–and obviously still has a few weeks to add to these tallies.

(All these stats, incidentally, are accessible on TDN's database.    Prizemoney is difficult to standardize in a global sport, but some models favor selective compression of certain overseas earnings. So long as they are applied consistently, however, Into Mischief will be breaking new ground in 2021.)

What makes this latest campaign so remarkable is the sheer spread of his cavalry. His principal earner is Mandaloun, currently on $1,560,000. While that sum may well be revised, once the agonizing GI Kentucky Derby saga is concluded, as things stand Mandaloun has banked just 6.8% of his sire's total for the year.

Compare that with Ghostzapper, who leads the pack gasping in pursuit: Mystic Guide has contributed 48.7% of his $15,201,047. This, of course, is just the latest measure of vulnerability in a sires' championship historically determined by prizemoney, following the advent of megaprizes such as the one Mystic Guide won in Dubai in March. In 2017, Arrogate secured Unbridled's Song posthumous laurels by banking 71.2% of his total, largely through his wins in the GI Pegasus World Cup Invitational and then in Dubai. Otherwise his sire would have finished 44th. The Gulfstream race's loss in value since has somewhat reduced the potential for distortion, but someday a horse is going to win both the G1 Saudi Cup and G1 Dubai World Cup and it won't matter if he's by a sire long since exported to Peru: they'll be able to call the championship more or less on the spot.

In the meantime, then, let's be grateful for a stallion performing such a valuable service for the integrity of the annals. Last time round, admittedly, Horse of the Year Authentic did pour over $7 million into his sire's coffers, representing 31.9% of his total, but Into Mischief was so dominant that he would still have been champion even without that contribution.      His advantage over runner-up Medaglia d'Oro was just shy of $10 million, by worldwide earnings. Measured by domestic income only, taking the Darley stallion's Hong Kong goldmine Golden Sixty out of the equation, Into Mischief earned more than runner-up Uncle Mo and third-placed Curlin combined.

In winning his maiden championship the previous year, moreover, Into Mischief owed just 5.5% of a haul exceeding

$19 million to chief earner Covfefe. He had also become the first North American stallion to produce more than 200 individual winners in a calendar year. He can only be so prolific, naturally, because of his farm's familiar business model. Aided by helpful levels of fertility and libido, he has maintained enormous books even as his fee has soared. True, his elevation to $225,000 last spring reduced his book to “just” 214, down from an eye-watering 250 at $175,000 in 2019. But let's not forget how efficiently he has vindicated the hope that superior mares would stretch his trademark speed into a second turn. Yes, there had already been auspicious straws in the wind, Owendale and Audible both emerging from cheap early books to finish strongly for placings in Triple Crown races. Should Mandaloun be duly promoted, however, his sire will have conceived consecutive Derby winners at fees still no higher than $45,000, in the case of Authentic, and $75,000, for Mandaloun–along with Life Is Good, whose performance in the GI Dirt Mile at Del Mar consolidated his claims as the most flamboyant talent of the year, if not quite yet the most accomplished. (How Eclipse voters would love to know the outcome of his projected Pegasus showdown with Knicks Go (Paynter)…)

Into Mischief's next crop of sophomores will be his first conceived at a six-figure fee, so we can be confident that he is going to keep setting standards. Quite where the story will finish, who can say? He's obviously now working on his profile as a sire of sires, a promising start having emboldened commercial breeders into the same kind of numbers game that Into Mischief has played so well himself. Indeed, the three biggest books assembled in North America last spring were all corralled by sons of Into Mischief: Goldencents, his trailblazer, and Authentic covered 230 and 229 mares respectively from the same barn; while Practical Joke welcomed 223 to Ashford. Other busy young sons include Instagrand, who entertained 190 at TaylorMade; and Audible, who received just one fewer at WinStar. Back at Spendthrift, meanwhile, Maximus Mischief added another 171 mares to the 196 he covered in his debut season. There's no shortage of more affordable alternatives, then, for those priced out by Into Mischief's latest hike to $250,000.

No stallion permits complacency. Into Mischief is now rising 17, and the final reckoning plainly depends on how long he remains favored by such robust health. As it is, this year he passed another landmark as the third-quickest American stallion to $100 million in progeny earnings. The two who preceded him have just exchanged the baton, Tapit overtaking the late Giant's Causeway at the top of the all-time table. Tapit is four years older than Into Mischief, and Gainesway have promised to deploy him with due restraint for the rest of his career. So while Tapit for now remains well clear ($177,178,898 plays $107,240,883), he will already be looking anxiously over his shoulder given the exponential swell, in both quality and quantity, behind Into Mischief since he won his early battle against the odds.

That story has been told too often to need reprising here; likewise, how the extraordinary Tricky Creek mare Leslie's Lady kindled a breed-shaper from an Ohio-bred son of Harlan (himself author of one stakes win and 99 named foals). But it is certainly apt that Into Mischief should this year have found new ways to honor the man who supervised his rise, alongside the audacious revival of Spendthrift. The loss of B. Wayne Hughes in August refreshed us all in his own rags-to-riches tale, one that will forever echo in our esteem for this extraordinary stallion.

Nonetheless we know that Into Mischief's percentages, between the ordinary caliber of his early mates and the sheer volume of his output since, will never be quite as impressive as the rest of his resumé. Comparing their ratios of elite performers, indeed, Curlin deserves saluting for the better year of the pair: each has had 12 graded stakes winners, but Curlin from just 251 starters as against 430 for Into Mischief. (The Hill 'n' Dale sire, moreover, claims five of those at Grade I level–one more than Into Mischief.)

That's useful perspective, for sure, and contains important challenges for the industry. We have to be careful about acclaiming a year of unprecedented achievement for a stallion, when in some respects he cannot even match one of his contemporary rivals. That said, few will argue with maintaining black-type performers, through these last five breakthrough years, at around 13, 13, 14, 15 and 15% of quite so many starters. In the long story of the breed, few stallions have earned and then taken their chances quite like Into Mischief.