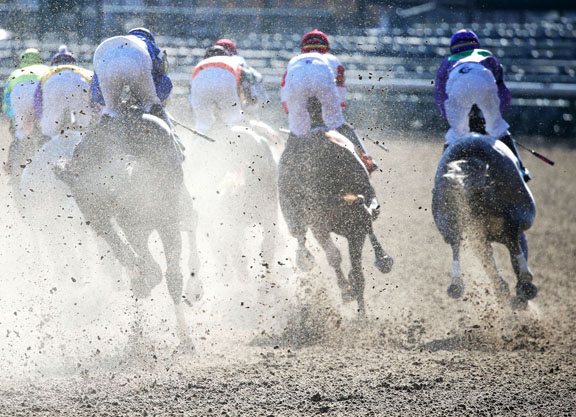 The definition of insanity, some smart person once said, is doing the same thing over and over and expecting different results.

In a twist on that aphorism, Kaleb Dempsey, laboratory manager of the Racing Surfaces Testing Laboratory (RSTL), explained one recent afternoon how part of the problem with the way racetracks maintain their surfaces is that, by virtue of their tools, they have been restricted to doing the same things over and over and expecting the same kind of results.

Which is where a new bespoke piece of equipment, currently undergoing teething tests, promises something of a quiet revolution.

“The goal is to help improve the surface if it needs improving,” said Dempsey, of a device called the Integrated Racetrack Tester, which combines into one the role of various surface measurement tools, and relays information in real time for quick consumption.

We had met at Del Mar–what was then the latest destination in Dempsey's whistle-stop tour of racetracks as part of a real-world baptism of fire for the tester, a product of The Jockey Club funding.

“It has been a work in progress, and still is,” he said, of the new tool. “There's only one way to find out if it works and that's field testing.”

According to Mick Peterson, head of the RSTL and pioneer of the Maintenance Quality System (MQS), the data collection service used by a number of racetracks, the new tool when ready will be delivered into the hands of superintendents at several places, including Churchill Downs, Maryland Jockey Club and New York Racing Association tracks, Keeneland, Del Mar, and Santa Anita.

So, why the need for the new tool?

Traditionally, racetrack superintendents have used two main devices to measure the relative soundness and consistency of a surface–the GoingStick, to test the going on the turf, and the FieldScout TDR Meter, which can measure moisture content in both the turf and the dirt.

The GoingStick measures both the amount of force needed to penetrate the soil and the “shear,” which is the force required to pull the device through the ground–two vital measurements to understand how a horse's hoof will behave on a given surface.

The process of gauging surface moisture can be a similar data minefield.

The FieldScout TDR 300–the model that most tracks possess, said Dempsey–can measure moisture content only. And while the latest model, the FieldScout TDR 350, has the ability to measure additional details like salinity and ground temperature, they both come with an in-built glitch: “They're both so heavily impacted by salt content,” said Dempsey.

What this means is that a track like Del Mar where the irrigation water can be extra salty runs the risk of producing moisture content readings that are off base, sometimes markedly so, said Dempsey. It might tell the operator that the track is saturated, for example, when in fact it's just fine.

Frustratingly for track crews seeking important data readings at the touch of a button, it can also take many hours for the information that GoingSticks and TDR meters collect to be beamed back to the Kentucky headquarters of the MQS, where they're processed into a palatable format.

“Ten years ago, nobody was collecting this data, and it's time to improve it,” Dempsey said. And he hopes the Integrated Racetrack Tester will do just that.

Dempsey and his colleagues have taken a Longchamp penetrometer-a surface measurement device used in Europe–and modified it a number of ways. The first is the introduction of probe-like sensors that read moisture content, salinity, dielectric constant–the permittivity of the surface–and soil temperature.

As compared to the TDR meter, Dempsey said he has “much more faith” in the Integrated Racetrack Tester's ability to accurately measure moisture content in even high saline environments.

Dempsey has left the ground penetration system intact–what amounts to a little weight that drops like a guillotine down an enclosed shaft and thumps a measuring stick into the soil. But he has attached an electronic sensor to collect that information digitally.

Importantly for track maintenance crews hungry for up-to-the-minute information, the device has been kitted with a sophisticated GPS system that logs the location of each measurement–both moisture-related and ground penetration–and beams it directly back to the MQS in Kentucky.

“It's all moving in real time,” said Peterson. “That's where we're headed.”

As with most prototypes, teething troubles are inevitable, and the Integrated Racetrack Tester is no different, with one of the tool's key sensors working perfectly well in the cool air-conditioned laboratory, but proving finnicky in the heat of the real world.

“We're at the point to where basically if I can get the temperature problem fixed, which I've gotten a lot closer to, we're ready to roll out five more of these,” said Dempsey.

The tester was recently trialed at Keeneland during the Breeders' Cup meet. “The one thing I like and appreciate about it is that it takes the human element out of testing the surface,” said Tim Fahrendorf, assistant track superintendent at Keeneland.

“With the current probe, the TDR 300, it can be affected if you just slightly wriggle it–when the air gets down to where the probe tips are on the surface,” Fahrendorf explained. With the Integrated Racetrack Tester, however, “You stick it in the ground and it remains still,” he added.

Fahrendorf did, however, raise a potential wrinkle on the map: The way in which handicappers will have to adjust to a new data set.

“Most people are used to seeing the going reports,” he said. “With the new device, it might take a little bit of time for people to look at it, understand it, and then ultimately use it to handicap and make their wagers.”

When the Integrated Racetrack Tester is up and running smoothly, Dempsey hopes to attach the GPS system to other commonly used tools, like the ground penetrating radar–a device used to map the composition of a track subsurface–and the water truck.

By harnessing the ability of the GPS system to transmit real-time data on a variety of different machines, Dempsey hopes to gather into their centralized system a broad array of information about the condition of many of the nation's racetracks.

From this rich data set, analysts might be able to refine what information points are necessary and which are superfluous with an eye to streamlining the current approach to racetrack maintenance, said Dempsey.

“What do we actually need to be measuring on these surfaces to check the consistency?” said Dempsey, who suggested that such an analysis could be completed within the year.

Peterson posited that the data currently being funneled into the MQS could also be a useful tool for better understanding the factors underpinning equine fatalities–especially if integrated with some of the industry's other data systems, like the Equine Injury Database.

The key, Peterson emphasized, is that the information is detailed, accurate and comprehensive. “We need so many measurements through so many circumstances before we understand what the risk is to the horse and rider,” he said.