Inspiral On Target For Falmouth, As Homeless Songs Stays Home 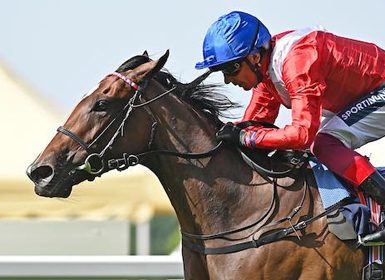 At the latest confirmation stage 11 fillies, including undefeated juvenile champion and G1 Coronation S. heroine Inspiral (GB) (Frankel {GB}), will contest the G1 Tattersalls Falmouth S. on July 8. The Cheveley Park Stud homebred's rider has not been revealed by John and Thady Gosden, as the former Clarehaven stable jockey Frankie Dettori is on “sabbatical”.

The elder Gosden was at Sandown to saddle Mishriff (Ire) (Make Believe {GB}), who was a narrow second in the G1 Coral-Eclipse, an said, “Sabbatical was a very carefully chosen word.

“I'm absolutely over the moon with what Frankie is doing, he's going to Germany [on Sunday], he's going to ride a lot for Mark Johnston at Newmarket next week because Joe [Fanning] has hurt his arm and then he's off to Belmont [next weekend], so he's doing exactly what I wanted to see.

“I'm very happy with it and he and I will be back together quite sensibly when we've passed through this.

“He knows as well as I do that you've got to be riding and not have any distractions. We've spoken again and we're very close friends, but I'm not going to say who is going to ride [Inspiral]–I've got to speak to the owners.”

The Italian has been aboard for four of the five 2021 juvenile filly champion's victories. Rob Havlin rode her in her winning debut at Newmarket last July.

One filly who will not take part in the Falmouth is the Dermot Weld-trained Moyglare Stud homebred Homeless Songs (Ire) (Frankel {GB}), who won the G1 Tattersalls Irish 1000 Guineas in scintillating fashion in May. Some of the fellow sophomore fillies that have stood their ground include G1 QIPCO 1000 Guineas second Prosperous Voyage (Ire) (Zoffany {Ire}), and a trio from Aidan O'Brien, among them Group 1 winner Tenebrism (Caravaggio). Among the older brigade is the multiple Group 1 winner Alcohol Free (Ire) (No Nay Never), Cheveley Park's G2 bet365 Mile heroine Lights On (GB) (Siyouni {Fr}), and French raider Sibila Spain (Ire) (Frankel {GB}), who won the G2 Prix du Muguet in early May.