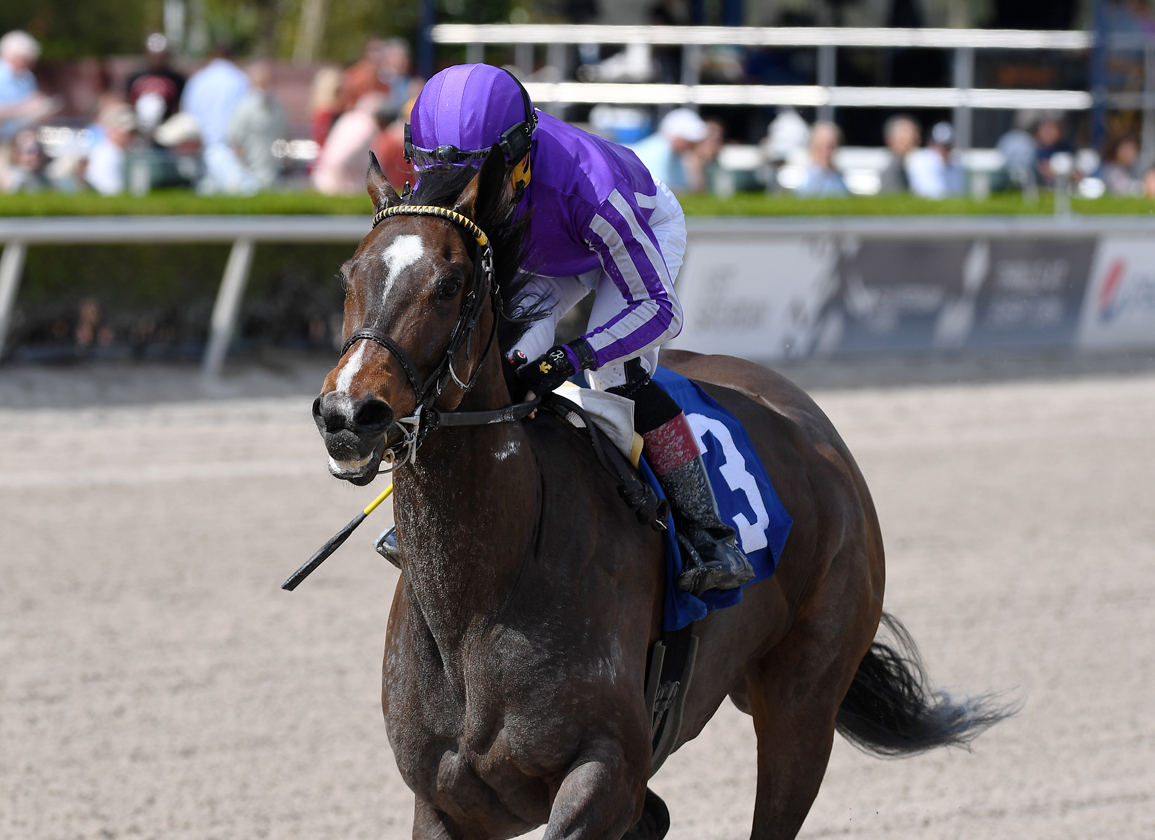 Welcome to Insight Outcomes, where we take a look at how the previous week's “Insighted” horses fared. Insights generally focus on well-bred and/or well-sold horses early in their careers, but occasionally we also have a returning older horse that's made a splash. That was the case this week.

If her 5 1/4-length tour de force in this Gulfstream allowance is any indication, 'TDN Rising Star' and GISW KIMARI (m, 5, Munnings–Cozze Up Lady {GSW, $407,169}, by Cozzene) has the potential for a big year ahead. Making her first start since for her new connections since being purchased for $2.7 million at last year's Fasig-Tipton November sale, Kimari was hard held early, merely got the whip waved at her in what was the most serene of hand rides, and pricked her ears as she crossed the wire. The bay won last April's GI Madison S. on the dirt at Keeneland, but has also been runner-up twice at Royal Ascot on the lawn (the 2020 G1 Commonwealth Cup and the 2019 G2 Queen Mary S.).

“She's been doing great,” trainer Wesley Ward said immediately after the race. “She's an immensely talented horse that's been plagued by physical injuries throughout her career and always overcame them. [Lately] she's been very, very sound.”

Ward has been Kimari's trainer from the outset, first for Ten Broeck Farm and now for the partnership of Derrick Smith, Mrs. John Magnier, Michael B. Tabor, Westerberg Limited, and Jonathan Poulin. He indicated the team was leaning toward a defense of her Madison title for Kimari's next start. Click for the Equibase.com chart or VIDEO, sponsored by TVG.

There can be only one winner and it was the George Arnold trainee VETERANS HIGHWAY (f, 3, Quality Road–New Wave {SP, $122,423}, by Tale of the Cat), featured back in a January Insights on debut, who broke her maiden by a head with Todd Pletcher's $250,000 Keeneland September buy Falconet (Uncle Mo), the first foal for 2015 GI La Brea S. winner Birdatthewire (Summer Bird), filling out the exacta. Veterans Highway's dam is a half to dual surface GISW General Quarters (Sky Mesa) and a full-sister to Japanese MGSW A Shin Top (Tale of the Cat). The homebred winner hails from the always-prominent team of G. Watts Humphrey, Jr. and W. S. Farish. Other highlighted firsters in the race got some education, including Tiffany's Mo (Uncle Mo), Blini (Tapit), and Peligroso (Honor Code), while Signal from Noise (Arrogate) scratched. Click for the Equibase.com chart or VIDEO, sponsored by TVG.

It was Oak Ridge Farm's homebred FELIX (c, 3, Cupid–City by the Bay {MSW, $172,240}, by City Zip) who put his December second-place finish behind Saturday's GIII Gotham S. runner-up Dean's List (Speightstown) to good use as he bested a field of well-regarded debuters, including Town Branch (Street Sense), whose older full-brother Speaker's Corner would win the GII WinStar Gulfstream Park Mile S. impressively later on the card with a 106 Beyer Speed Figure. For the record, like Town Branch, MGSW Speaker's Corner didn't win his unveiling either. Hidden Plan (Street Sense), Mendenhall (Pioneerof the Nile), and Super Quality (Competitive Edge) each got some experience in their first outing. Click for the Equibase.com chart or VIDEO, sponsored by TVG.

PREVALENCE (c, 4, Medaglia d'Oro–Enrichment, by Ghostzapper), a Godolphin homebred and 'TDN Rising Star' last year who dabbled in graded company early in his career, came back after a freshening, shook off the rust, and got a 99 Beyer Speed Figure in an uber-impressive 4 3/4-length score. His lovely family includes his great-granddam Desert Stormer (Storm Cat), who beat the boys in the 1995 GI Breeders' Cup Sprint. His own dam is a half-sister to GSW Sahara Gold (Seeking the Gold), herself the dam of MGISW Better Lucky (Ghostzapper). Also returning from the bench was another 'TDN Rising Star' in Stage Raider (Pioneerof the Nile), a half to Triple Crown hero Justify (Scat Daddy). Stage Raider had the misfortune of stumbling at the start and has only lost two races, both to Prevalence. Click for the Equibase.com chart or VIDEO, sponsored by TVG.

TAIBA (c, 3, Gun Runner–Needmore Flattery {MSW, $732,103}, by Flatter) had the sort of debut that keeps dreams alive and drives big auction prices. The colt was a $1.7-million Fasig-Tipton Gulfstream 2-year-old (:10 1/5) for Zedan Racing Stables, worked smartly last spring and summer, then went to the sidelines for five months before making a start. He returned to the worktab in November, cranked up with a bullet 1:12 3/5 six-furlong move (1/12) Feb. 27 at Santa Anita, and registered a powerhouse 7 1/2-length win Saturday to be named Gun Runner's latest 'TDN Rising Star'. The romp was good for a 103 Beyer Speed Figure, co-highest for a 3-year-old to date in 2022. Debuting in the same race was Tenth Street Don (Practical Joke), who raced wide. He was also a 2-year-old purchase, going to Holly and David Wilson for $240,000 at OBS April after working a furlong in :10 1/5. Click for the Equibase.com chart or VIDEO, sponsored by TVG.

Chad Brown stablemates bookended the field, with $300,000 Keeneland November weanling buy and last August's 'Insighted' ELECTABILITY (g, 3, Quality Road–Spindle, by Hard Spun) prevailing to win his second start while Don the Jeweler (Into Mischief) settled at the back of the pack and drifted out late. Electability is from the same family as MGISW Lion Heart (Tale of the Cat). Don the Jeweler was an $875,000 Keeneland September yearling whose dam is a half-sister to GISWs Include Me Out (Include) and Check the Label (Stormin Fever). Click for the Equibase.com chart or VIDEO, sponsored by TVG.