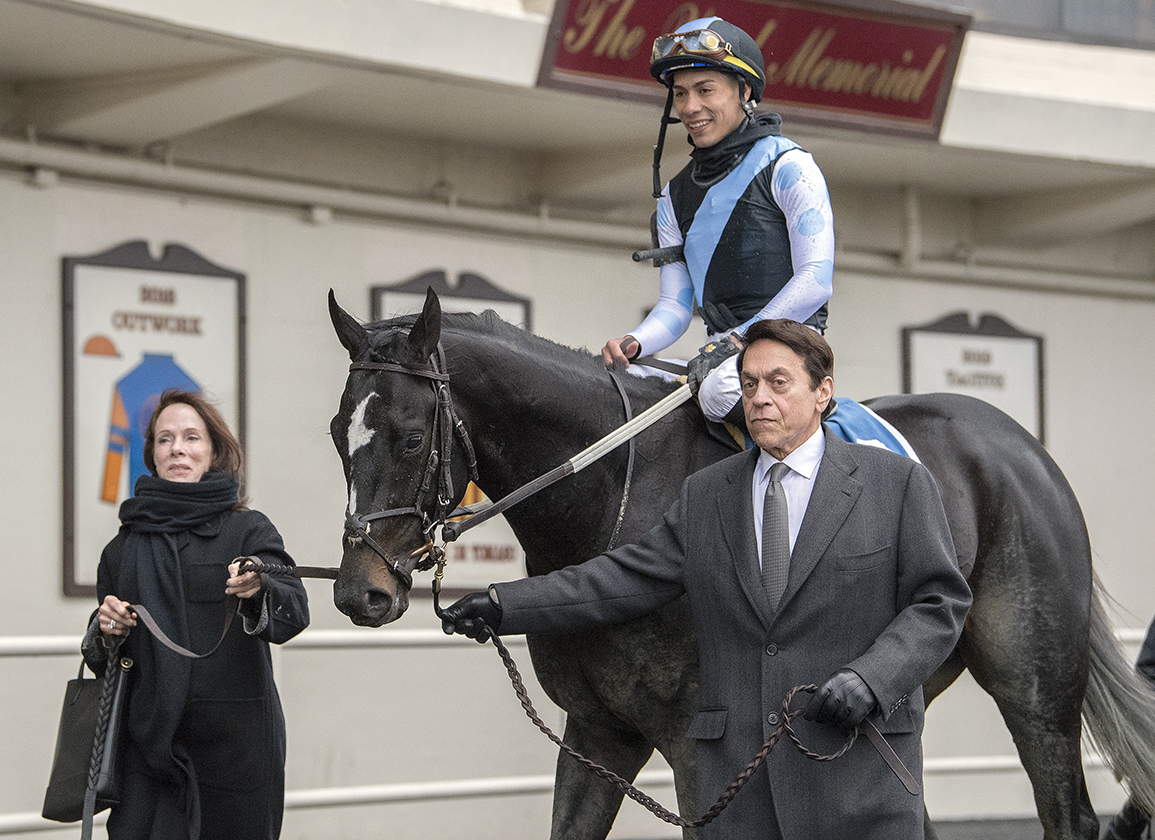 Bob Verratti, who has done a little of everything in racing for the past four decades, decided to purchase a small group of pinhooking prospects at the 2018 yearling sales and, with the help of bloodstock agent Dennis O'Neill, the Pennsylvania businessman came away with a pair of home runs, albeit to opposite sides of the park. The first of the trio to go through the sales ring was a colt from the first crop of Constitution who Verratti bought back for $200,000 at last year's Fasig-Tipton Gulfstream sale. The buy-back proved fortuitous when, named Independence Hall, the dark bay's impressive debut win attracted high-power partners in Eclipse Thoroughbreds and Twin Creeks Racing and he dominated the 2019 GIII Nashua S. in just his second career start.

Verratti's second offering at last year's juvenile auctions was a daughter of Carpe Diem who turned heads with a quarter-mile work in :20 3/5 at the OBS Spring sale. Purchased for $75,000 as a yearling at the 2018 Keeneland September sale, the filly sold to Phoenix Thoroughbreds at OBS for $475,000. Now named Scolding, the filly was equally impressive in her racetrack debut, winning geared down by six lengths at Oaklawn Park May 2 (video) and earning the 'TDN Rising Star' label.

Verratti traces his love of racing right back to a specific day in the summer of 1967.

“I was in the Navy and I was stationed at the Knolls Atomic Naval Reactor Facility in West Milton, New York,” Verratti said. “I had one day off, so I went to this place called Saratoga. I went with $12 and I came home with $18, show bets all. I thought it was the greatest thing in the world. I made $212 a month at the time, so that was pretty big money. I went back the next day with the $18 and I came back with nine. The good news for me was that was closing day.”

It would be nearly a decade later that Verratti became a racehorse owner.

Asked if his initial $1,500 investment had panned out, Verratti admitted, “No. But I thoroughly enjoyed it and I started to read and study and took an interest in breeding and bloodlines even before I could act on it. Just as a curiosity for me and an intellectual exercise to see if there was a way to figure this all out. And I realized after all of that study, that yes, there are some things that you can give you a better probability of success, but it's always better to be lucky than smart. That's my conclusion after 40 years.”

By the 1980s, Verratti owned a handful of horses each year and raced mostly in California. He also bred a few fillies he had raced. He came closest to graded stakes success with Our Bobby V. (Majestarian), who was second in the 2003 GII Santa Catalina S. With family friends Kirk and Debbie Wycoff of Three Diamonds Farm, he even tried his hand at the pinhooking game.

“That was successful, it was very successful,” Verratti said of his initial pinhooking venture. “We put up a few bucks and we made a few bucks and it was fun and exciting. But mostly, I was too busy in my career to really follow up on any of it. I just kept watching it out of the corner of my eye, always seeing how pinhookers were doing and how racing was going. You can call me intensely passionate about the sport, but a small player in the business for that last 40 years or so.”

His investments in the sport benefitted from a chance encounter with Dennis O'Neill in 2008.

“Dennis bought a horse I bred at the Barretts [2008 May sale] for $12,000,” Verratti said. “I think it was one that he just decided to take a chance on. I didn't know him, but I called him up and told him I had bred the horse and I shouldn't have let him go for $12,000. I asked him if he would let me back in as a partner. He did whatever due diligence that he needed to do on me, and apparently he did it incorrectly because he accepted me. So we started out with a horse named Skim Scam (Skimming). He only won a couple of races, but it started a relationship with Dennis and that's probably 20 years ago.”

When Verratti decided to purchase pinhook prospects in 2018, he turned to O'Neill, who had already picked future Kentucky Derby winners I'll Have Another and Nyquist out of public auctions.

“Dennis has picked out horses for me, usually in partnerships, especially around Del Mar time, so we have something to run there,” Verratti explained. “I called him and I said, 'Dennis, I want to buy some yearlings to pinhook.' and he said, 'Fine, I'm going. Let's do it.' So we did.”

Verratti went into the Keeneland September sale with a budget of $400,000 to $500,000 and expecting to buy up to four horses in the $75,000 to $150,000 range. Independence Hall and Scolding are both from the first crops of their sires and Verratti agreed that was part of his buying strategy.

“If you wanted to buy the Into Mischiefs and the other established sires, that was way, way out of my budget,” he explained. “So we were looking for a horse that we could take a shot with. If it didn't work out, it would be OK and if it did, obviously, we could turn up with something that really worked well for everybody.”

In the name of his Charlestown Investments, Verratti purchased three yearlings at the September sale that year: Independence Hall for $100,000, Scolding for $75,000, and still-unraced Moonhak Mischief (Into Mischief) for $175,000.

“That was enough,” Verratti said of the trio. “Dennis did try to get me to buy two more. But I am an investor and a venture capitalist and I've run several companies in my life, so I can tell you this: no other business that I've been involved in punishes you for lack of discipline like the horse business does. So I said, 'No, Dennis. I appreciate it. They look good, the price looks right, but I have a budget and I have to stop here.' So who knows how many future graded stakes winners I left out there?”

The three yearlings were sent to Ocala for the winter.

“We sent them to Ciaran Dunne down at Wavertree,” Verratti said. “He has an excellent, excellent operation. And I will tell you this, while they were in training, in retrospect, he was spot on in his analysis of how he told me they were all progressing. He told me, 'Bob, I don't think the Into Mischief is going to turn out to be much. The Carpe Diem could surprise you.' And Independence Hall, he said, 'He's getting so good every day, we're going to enter him in the Gulfstream sale,' which is a premium sale.”

“We had a reserve set at $180,000 and we got to $185,000,” Verratti recalled. “Dennis said, 'Bob this horse is so much better than that. The shin is putting people off.' He said, 'You can't go wrong if you race this horse, but you've got to do what you've got to do.' I had about eight seconds to think about it and the next thing I know, Dennis's hand is in the air. I said, 'Dennis, did you just buy yourself a horse?' He said, 'No, you have one.' So we brought him home.”

Independence Hall swept to an impressive debut victory at Parx on the Pennsylvania Derby undercard last September for Verratti and wife Kathleen, but added in Eclipse Thoroughbred Partners and Twin Creeks Racing for what had originally been a planned allowance start at Laurel Park. A fluke turn of events turned into Verratti's first graded stakes win as an owner when the colt romped to a 12 1/4-length victory in the GIII Nashua S. at Aqueduct.

“I must admit, being a risk taker, I wanted to go to a stakes race, but the better part of wisdom was to go to the allowance race,” Verratti explained. “So we had an allowance race at Laurel and Joel Rosario flew down to ride. But a water main broke on the main track and they cancelled racing the morning of the race. The only race available was the Nashua. We didn't want him to sit in the barn, so we reluctantly ran him in the Nashua. He went off at 9-1 and of course that's when he ran his triple-digit Beyer. And everybody thought we were geniuses. So there has been a lot of serendipity with him: the shin helped me out, then the water main break. I should have sent a case of champagne to the maintenance crew down at Laurel.”

It was an easier decision to let Scolding sell at OBS last April.

“Anytime you can buy a horse for $75,000 and sell it seven months later for $475,000, you'd have to catagorize that as a good result,” Verratti said. “But because I had kept the Constitution, I really did need to sell her. The Carpe Diem could have worked in :19 and something and I would have still sold her. I try to follow the discipline rule and I am very happy. It took her a year to get to the races, but boy does it look like it was worth it. I will be happy I sold her even if she goes on and wins the Kentucky Oaks, and God love her, I hope she does.”

Despite the success of his 2019 juveniles, Verratti wasn't planning on another pinhooking venture this spring.

“I was really enmeshed in a couple of business transactions that took all of my time and I couldn't make it to the sale,” Verratti said. “I trust Dennis implicitly, no doubt, he's bought me lots of horses that I wasn't present for. But we decided we were going to pass.”

Still, O'Neill found a way to keep the owner involved in the game.

“Dennis told me, 'I have a horse you just have to buy.' He had already purchased him, so we bought him. So I only have one 2-year-old.”

Fittingly the youngster, catalogued at the upcoming OBS Spring Sale as hip 820, is a colt from the first crop of Nyquist, the 2016 Kentucky Derby winner O'Neill picked out at the Fasig Gulfstream sale in 2015.

“It's a first-year sire again and Dennis picked him out,” Verratti said. “How can you not take advice from someone like Dennis, especially when it comes to a Nyquist?”

Understandably, Verratti is undecided about his plans for the yearling sales coming up this fall.

“A lot of it depends on the dynamics,” he said. “I think everyone right now is on pause with their plans. This is not my livelihood or my life, it's something that I very much enjoy. But there are others in the business, it's critical that they try to figure out what is going on and plan accordingly. For me, I will be looking for targets of opportunity. But I need to see more about what is happening to racing. I think we all do.”

As for Independence Hall, he added a win in the Jerome S. and a runner-up effort in the GIII Sam F. David S. to his resume this year, but was a disappointing fifth when last seen in the Mar. 28 GI Florida Derby.

“He is back galloping,” Verratti said of the colt. “It's a shame he had to throw in a bad race in the Florida Derby, but we are sorting that out. We will get it all sorted out and see what the calendar will show for us for the balance of the year. I think he's a brilliant horse.”