How Goddess Channels Value and Viability 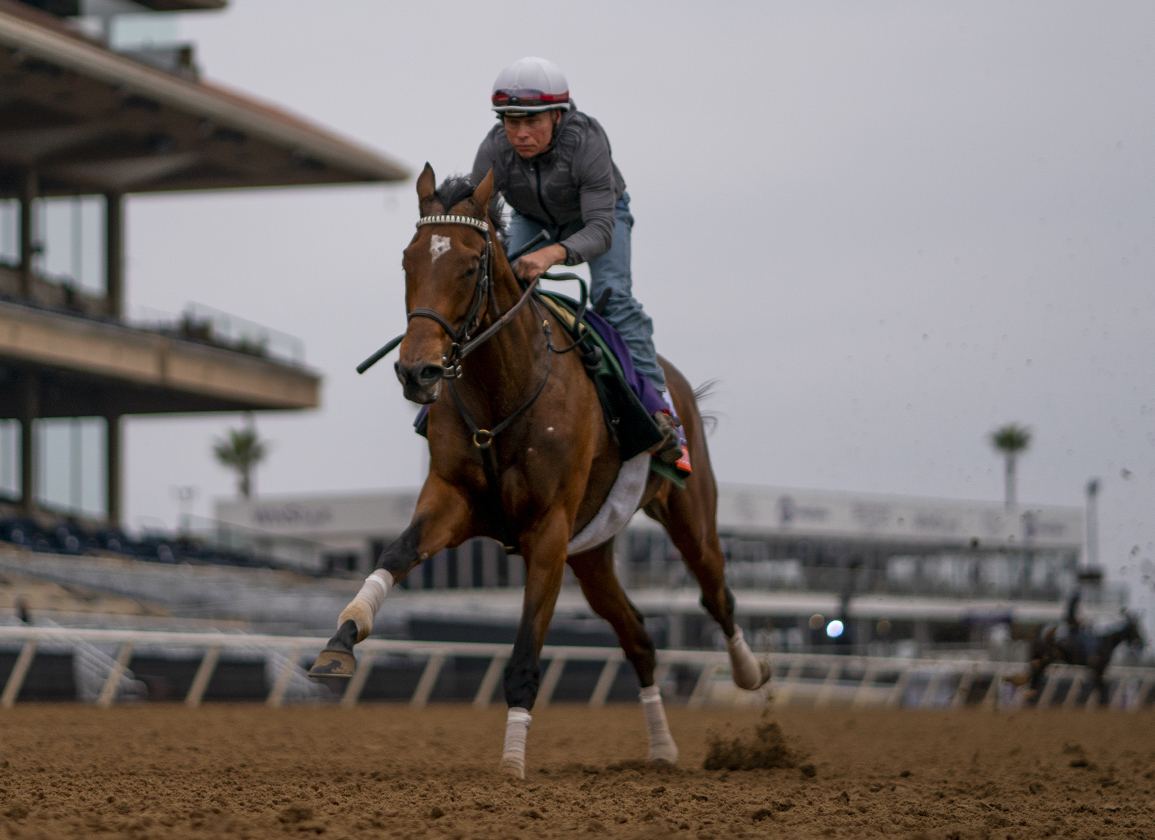 Once again, the Breeders' Cup reminds us how our whole business hinges on a delicate equilibrium. On the one hand, we need the kind of big plays made on barnmates Gamine (Into Mischief) and Corniche (Quality Road), who changed hands for $1.8 million and $1.5 million respectively, to come off sufficiently to keep the big spenders in the game. But we also need those Goliaths to be humbled, from time to time, by a little guy with a sling. If the Derby were won by a sale-topper every year, the pyramid of bloodstock values would not be vindicated; it would collapse. Because it's vital that every dreamer, at every level, feels he or she has some kind of chance.

We saw that in Wednesday's TDN, with the man who bred four of the best juveniles of the crop from mares that cost a total $32,400. Seeing that, perhaps the bigger farms will ask themselves whether their expensive quest for perfection will sometimes contain the seeds of its own undoing. It's a tough world out there, for the horses we breed, maybe we place such a premium on aristocratic glamor–breeding, elegance, every comfort in upbringing–that we risk introducing an element of delicacy or daintiness.

A still more uncomfortable challenge, however, is offered to those talent spotters who spend big for wealthy patrons. I have often heard horsemen anxiously complaining that they need to find an owner for a lovely horse that cost too little to be offered a client who has set a much higher budget: “They'll only ask why nobody else wanted it.” But the fact is that nobody “discovers” an oil painting with a stallion's page. With those, it just comes down to how deep prospectors are prepared to dig the glaringly obvious seam. Yet how few of those guys stick around for the dregs of a sale, ready to back their judgement on a diamond in the rough.

You might attribute that to a want of diligence or patience. But I would sooner put it down to a want of nerve. Arguably it takes more courage, more self-belief, to offer a tycoon a cheap horse from the second week of the September sale than it does to buy a seven-figure knockout in Book I.

That's why I doff my cap to the man who bought Gamine, Donato Lanni. He has deservedly assembled some pretty powerful clients over the years, having applied lore absorbed from John T.L. Jones to long associations with John Sikura and lately Bob Baffert, his resumé decorated by three winners of the Breeders' Cup Classic in Authentic (Into Mischief), Arrogate (Unbridled's Song) and Bayern (Offlee Wild). But the man who bought Gamine can also be credited with one of the great bargains in this year's Breeders' Cup cast, GI Maker's Mark Filly and Mare Turf favorite War Like Goddess (English Channel).

Aptly enough, he bought this filly–for $30,000 at OBS June–for the client who got him started, George Krikorian, who allowed Lanni to roll the dice on a $35,000 yearling filly by Dynaformer in 1999. She became millionaire and multiple Grade I winner Starrer; and War Like Goddess is threatening to bring things full circle, having won for the sixth time in seven starts on her Grade I debut in the Flower Bowl S.

This is one of those horses that have left a bunch of people standing on the riverbank, looking forlornly at the vacant hook at the end of their line and lamenting the one that got away.

Bred by Calumet, home to her chronically undervalued sire, she was first sold as a weanling for just $1,200 deep in the Keeneland November Sale of 2017 to Falcon L&L Stables / Lawrence Hobson. She was offered in the same ring the following September but was sent back as a $1,000 RNA, and resurfaced at OBS June for Hemingway Racing & Training Stable, breezing in :10 2/5. Step forward Lanni, with HND Bloodstock, to improve her value to $30,000.

The agent has described his curiosity on finding this “big, lanky” staying type in a sale like this. He felt she just needed time–and an owner who would give her just that. Krikorian was the very man, and Bill Mott the trainer to match. Sure enough, War Like Goddess did not resurface until September the following year, but she has barely looked back since.

There will be people similarly reproaching themselves over the odyssey of her dam, Misty North (North Light {Ire}), winner of a maiden claimer at Golden Gate Fields in 11 starts for breeder Judy B. Hicks after being retained as a $10,000 yearling. Calumet picked her up for $30,000 on retirement, carrying a first foal by Cape Blanco (Ire) who never made the track, and covered her with Red Rocks (Ire). The resulting yearling made just $2,000 before winning a series of claimers, but her next foal is War Like Goddess, who remained unraced when Calumet culled Misty North carrying a Bal a Bali (Brz) colt at the Keeneland November Sale two years ago. (They had tried to do so at the same auction the previous year, but she failed to generate a single bid.)

Misty North–who was still only nine–was bought for $1,000 by Charles Yochum, who took her home to his ranch in Texas. The other investor who has doubtless followed the rise of War Like Goddess with astonishment is Matt Ferris, who purchased Misty North's weanling filly by Red Rocks for $5,000 in the same catalog.

However those particular investments have played out, now that they respectively concern the dam and half-sister of a Breeders' Cup favorite, they reiterate our opening premise. We all need to feel we have a shot.

In view of the family's commercial struggles to this point, it's worth raising a couple points about the things missed by everybody bar Lanni.

The first is a fairly poignant one. Because War Like Goddess probably needs to replicate her racetrack excellence in her next career to preserve any kind of legacy for her damsire, who won the 2004 Derby for one of Europe's premier cultivators of Classic blood at the time, Ballymacoll Stud, before being imported by Adena Springs.

We must wait and see whether North Light will prove the last Epsom Derby winner retired to Kentucky–a profoundly depressing prospect, when you think of the breed-shaping impact here of so many predecessors, from the inaugural winner Diomed to Blenheim to Roberto, but very possible given the antipathy of the U.S. commercial market today to turf stallions (never mind staying turf stallions). But North Light certainly proved incompetent to stem that tide, even though access to his sire, the great international influence Danehill, had been a rarity in Kentucky. A peripatetic career that also took in Ontario, a return to Newmarket and California evidently drew unsustainably on a dam who, while a Group 1 winner herself, had achieved that distinction over a distance (two and a half miles!) unfathomable to the American commercial market.

Granted the pedestrian production record of her granddam, an unraced daughter of Victory Gallop, perhaps something has filtered through to War Like Goddess from third dam Romanette, a daughter of Alleged and Laughing Bridge (Hilarious), who completed the Schuylerville-Adirondack double in 1974. Romanette managed a couple of placings in graded stakes before proving a useful producer in Europe, where she had two Group 1-placed sons in Blush Rambler (Blushing Groom {Fr}) and Tendulkar (Spinning World).

Overall, however, it would seem that the principal genetic credit for War Like Goddess must go to her sire. He's having another wonderful year, consolidating his maiden domestic turf championship last year and making it very hard even for those of us who have long admired Kitten's Joy to deny that English Channel, as they approach the evening of their mutual careers, may have overtaken him as the premier grass stallion in America–even though he has hitherto been standing at less than half the fee. The fact is that their lifetime percentages now favor English Channel across all indices, as well as by earnings-per-starter.

War Like Goddess is one of three Grade I winners, eight graded stakes winners and 21 black-type performers for English Channel across North America and Europe this year. Kitten's Joy has admittedly had a quiet campaign (none, one and 14 in those categories) by the outstanding standards that have secured him two general sires' championships, but he could yet redress that with his outlying son Tripoli a live longshot in the GI Longines Breeders' Cup Classic itself. He has plenty of ground to make up on Medina Spirit (Protonico) in their rehearsal at Santa Anita, but he had a wide trip that day, gets Irad and returns to the course and distance of his finest hour in the GI TVG Pacific Classic; while the winner, for his part, should reckon on a lot more competition up front this time.

Reverting to his rival, however, we must salute English Channel as a bulwark of precisely those genetic assets–such as durability and longevity–most urgently required by the breed today. He doesn't have the prizefighter build that comforts commercial breeders, and his median for his latest yearlings has run dead level with their $30,000 conception fee. Exactly the same, in other words, as Messrs. Lanni and Krikorian gave for War Like Goddess as a juvenile.

And here she is, favored to beat the Europeans at their own game. Mind you, their familiar myopia regarding dirt sires apparently extends even to U.S. turf stallions as outstanding as English Channel and Kitten's Joy (despite the immense impact made by the latter, from limited opportunity, most notably with the tragic champion Roaring Lion).

But that brings us right back to where we started. Because if our industry finds its critical energy in everyone having some kind of chance, then that often feeds precisely on the fact that commercial breeding is so nervously oriented to the sales ring, rather than the racetrack. This may very well be storing up trouble for the breed, in the longer term. In the meantime, however, it does allow the likes of English Channel to assist those smaller players laboring under the quaint delusion that it might be nice to have a horse that can actually run.