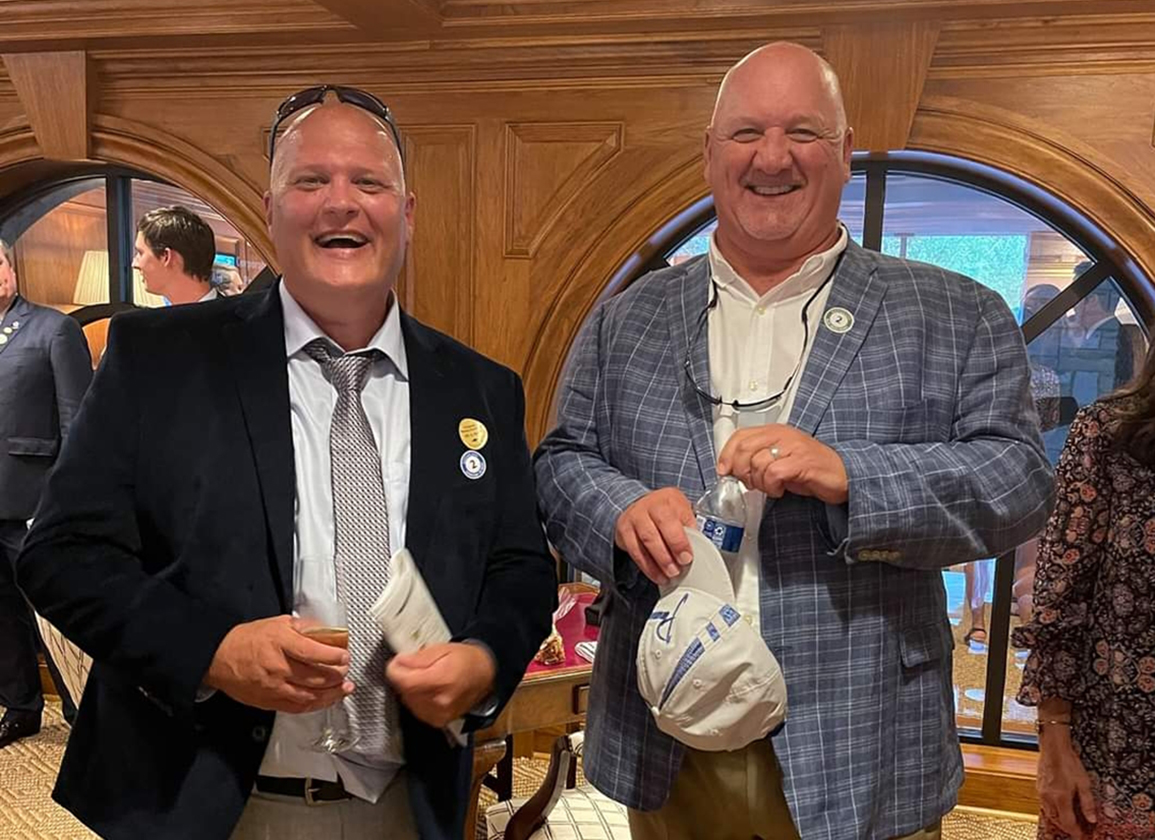 Any farm, really any farm–right up to the most iconic Bluegrass nurseries–would have been proud to have two juveniles as accomplished as Rattle N Roll (Connect) and Electric Ride (Daredevil) heading towards the Breeders' Cup. And for both to have meanwhile dropped out, in wildly contrasting circumstances, would only have reiterated the odds to be overcome by even the most lavishly resourced operations. Rattle N Roll, winner of the GI Claiborne Breeders' Futurity, can regroup next year after a minor foot issue ruled him out of the GI TVG Breeders' Cup Juvenile; tragically there is no such comfort regarding Electric Ride, the GII Chandelier S. runner-up, following her freak loss (reportedly to an anaphylactic shock) a couple of weeks ago.

Incredibly, however, the farm that bred both still retains, not one, but two unbeaten contenders for Friday's 2-year-old card at Del Mar. Hidden Connection (Connect), nine-length winner of the GIII Pocahontas S., looks formidable in the GI Netjets Breeders' Cup Juvenile Fillies, while One Timer (Trappe Shot) heads for the GII Juvenile Turf Sprint off a 12-length maiden win and two stakes scores. A banner achievement for any breeder. Impossible, then, to give adequate credit to St. Simon Place, whose scale of operation can be judged from the aggregate cost of the mares responsible for these four youngsters.

Tommy Wente, the man responsible, quickly does the math.

Wente telephoned his friend Tommy Eastham of Legacy Bloodstock after One Timer won at Santa Anita and Electric Ride ran second in the Chandelier on the same card.

“I just want to know, Tommy,” Wente said to his namesake. “Is this luck, or am I doing something right?”

“Well, when Hidden Connection won the other day, I guess I might have said a little luck,” replied Eastham. “But after these two here? You've got be doing something right.”

Then, when Rattle N Roll won his Grade I a few days later, Eastham called again. “Man, whatever you're doing–just keep doing it!”

So what's the secret? When you think about the fortunes being spent by others, it feels like a pretty big question.

“Everybody asks me that!” says Wente, who runs the breeding division of St. Simon while partners Calvin and Shane Crain concentrate on a parallel sod-growing business. “I'm known for going in there and buying cheap horses. But they're not really cheap horses, in my eyes. For me, they're very well-bred horses that come from very good farms. Okay, so they've been culled: this one's got a bad knee, this one's a little sore, this one needs more leg. But that's what I look for, because I can't buy mares that are perfect.

“So I look for the kind I can breed to something that can fix them. I see whether I can breed [any issues] out of them, and can get me something on the ground that I can sell. But that's what makes it even more amazing to us, everything that's been happening. Because often you can get by with those kinds of mares if you're racing their babies. But we sell [nearly] everything.”

One observable trait, consistent with accepting perceived flaws to meet the budget, is that all four of these mares were very lightly raced. But the real key is to find a filly out of a young mare who has been given a chance with good covers and, ideally, has already achieved prices suggestive of good physicals.

“That way I can just sit back on them,” Wente reasons. “I can let the family grow for a few years.”

A perfect example of the modus operandi is One Timer's dam Spanish Star (Blame), picked up for just $1,500 at Keeneland November four years ago.

“I knew where she was raised, I knew the owner Tracy Farmer, I knew they did it right,” Wente recalls. “Okay, she didn't work out on the racetrack, but she was the first foal of a mare that had some stuff going, she had a son by Awesome Again in work. And that turned out to be Sir Winston. A year later he wins the Belmont and, bam, I can sell the half-sister [privately] for $150,000.”

Now Wente is hoping to close out the exploding value of a couple of other diamonds found in the rough, with the dams of Hidden Connection and Rattle N Roll both scheduled to enter the ring next week.

C J's Gal (Awesome Again) was discovered at the Keeneland January Sale of 2016, having derailed after a single start. Wente knew that the big spenders would literally overlook her, being on the small side, and landed her for $9,500. Her first foal, a Tourist filly, made $70,000.

Okay, so her second foal was a $49,000 RNA weanling who was ultimately let go for $40,000 the following September. But at least that meant Hidden Connection could benefit from the farm regime for another few months–and that, to be fair, could be as important as any other ingredient in St. Simon's success.

“I try to raise a great product,” Wente says. “I love my feeding program, I love how we wean them. And I don't put horses in a barn. Our horses are outside 24/7, raised in herds of, like, 10. And if they get kicked, they get kicked. If they get snotty noses, they get snotty noses. You know, to me, that's what makes them tough. You have to let them go through all that stuff. In my opinion, we give them too much medicine; we baby them too much. I think we get caught up, with so much money tied up in them, wanting to protect them. 'He's limping today, he doesn't feel too good, better get him inside.' No. Let that horse be a horse, let him figure it out.”

C J's Gal is offered as hip 148 (with a Frosted cover) at Fasig-Tipton; while Jazz Tune (Johannesburg) is catalogued as hip 222, in foal to Liam's Map, at Keeneland. Wente picked her up, a $20,000 apple from the tree cultivated by the late Edward P. Evans, at the same sale five years ago. She had won a Parx maiden (though in another light career) in the silks of William S. Farish. Jazz Tune has some wonderful old-school seeding to her family, out of a Pleasant Tap half-sister to two Grade I winners (plus another at Grade II level) out of the Northern Dancer blue hen Dance Review.

Mind you, no matter how much you get right, you always need a bit of luck. How fortunate, for instance, that Jazz Tune did not meet her reserve at $55,000 when Wente returned her to Keeneland, with Rattle N Roll in utero, in 2018. But sometimes it just takes a little time to develop value. One Timer, for instance, made no more than $21,000 as a yearling, his sire having meanwhile been exiled to Turkey. While we've already noted how Hidden Connection struggled for traction.

But the yearling Electric Ride brought $130,000 from Quarter Pole Enterprises at Fasig-Tipton October, some yield for an Indiana-bred daughter of a mare, Why Oh You (Yes It's True), bought for $1,400 deep in the same Keeneland November Sale that produced Jazz Tune. Electric Ride advanced her value to $250,000 through Eddie Woods at OBS the following April, while Rattle N Roll proved a still more profitable exercise for his pinhookers. A $55,000 Keeneland November weanling for Rexy Bloodstock, he made $210,000 from Kenny McPeek in the same ring the following September.

No doubt about it, then, a grounding at St. Simon Place is becoming ever more trusted; and its graduates are punching ever more above weight. Wente has now expanded its broodmare band past 40, some owned with another partner in Scott Stevens, and raised around $750,000 from eight yearlings at Keeneland in September, selling as usual through Machmer Hall.

“You've got to surround yourself with good people, people willing to help,” Wente stresses. “Because I have to reach out every day. I couldn't do what I'm doing without Carrie Brogden. She's opened a lot of doors for me, and she's always No 1 about the horses. People like her and [husband] Craig have been there and done it all. If she's says, 'Tommy, you want to pull that horse from the sale,' I'm pulling the horse from the sale. I'm going to take criticism and use it.”

That said, the driving principle remains the sweat of his own brow.

“At the end of the day, I truly believe that it's the time you put in raising them,” he says. “It's the cutting the grass, fixing the fenceboards, fixing the water. It's everything together. If you want to be the person who just sits in the house watching TV, letting everybody else do your work, fine. But I do my books, I do my matings, I do my contracts, I do my registrations. I'm as hands-on as I can be.”

They say that necessity is the mother of invention and maybe those big farms that find themselves mere bystanders at the Breeders' Cup can learn something from the strategies Wente has adapted to work his budget. Maybe insisting on perfection, on the very best that money can buy, invites its own fragilities. Maybe it's more important to concentrate on connecting with horses, and connecting them with their environment. Nothing, that way, gets in the way of the passion.

Wente first had his imagination captured when visiting the barn of his stepfather, former Hoosier Park trainer Tom Hickman, some 20 years ago. He was captivated. He simply had to have one of these beautiful animals. The one he bought, an Indiana-bred, ran once and showed nothing. Then one night the phone rang.

“We had them boarded over there at the old Quarter Horse track, Riverside Downs, in Henderson, Kentucky,” Wente recalls. “About two o'clock in the morning I had a call from the trainer. They'd had a barn fire, lost all these horses. Of course, my stepdad's horses were in there, my horse was in there. It was the low of the low. My very first horse, lost in a barn fire. But I knew I was hooked–because the very next day I was looking for another one to buy. And I've been hooked ever since. The highs are high, the lows are low, and there's no in-between. It's the guys that can take those lows, and keep on going, that are going to make it.”

So here's one such, who boards the plane for California on Thursday not just flying the flag for a 400-acre parcel of Kentucky, but for every small breeder striving against the perceived odds.

“I'm for the little guy,” Wente says. “I am a little guy. I started out in Indiana, okay. I raised so much crap over there that nobody wanted. And then I've come over here to Kentucky, but I kept the same mindset. I never changed what I did. I just started buying Kentucky stuff, and dealing with Kentucky stuff, the way I did the Indiana stuff. You don't need to have Justify or Tapit. The highest stallion we've used would be $30,000, tops.

“So I want the little breeder to know, keep your head down, keep doing what you're doing. People know me as that crazy guy going in there buying horses for $1,000, $2,000. But you know what, there is some kind of method in my madness. I haven't figured it out yet. But there's something going on, right? I've proved you can do it. You can do it, man. If I can do it, anybody can do it.”