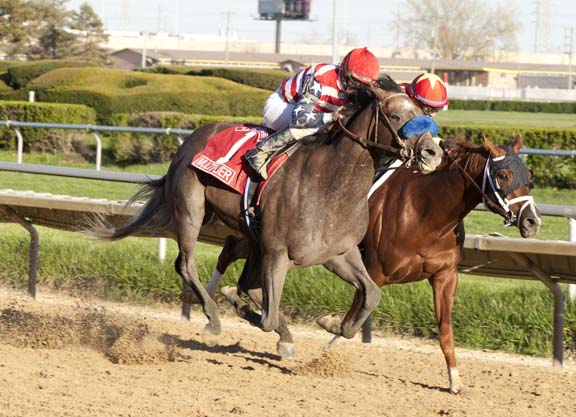 Hawthorne Race Course will not run a spring Thoroughbred meet in 2020 because the afternoon races will conflict with the large-scale reconstruction of the track's grandstand and clubhouse that will transform the plant into a racino.

The Blood-Horse first broke the story on Thursday, but TDN obtained additional details about the project from both Hawthorne and Illinois Thoroughbred Horsemen's Association (ITHA) officials.

“The beginning of the construction is going to be in January, and there's too much loud work that has to be done on the outside and the inside in terms of cutting steel and those types of things,” said Tim Carey, Hawthorne's president and general manager. “It's a one-off, one-time event, and we have every indication of being up and running [Thoroughbreds] from October through December.

Hawthorne's night harness racing dates during the construction period will not be disturbed, Carey said, because the day's work will be completed before the evening cards start.

“The horsemen's perspective is one of recognition that this is what has to be done in order for the sport to get better in Illinois,” said David McCaffrey, the ITHA's executive director. “So we're looking at it in a way of short-term pain, long-term gain.

“Make no mistake, this is going to create a hardship for all sorts of trainers, grooms and backstretch workers,” McCaffrey continued. “We're going to bite the bullet, but it's the medicine that we have to take to get better.”

McCaffrey said it was “good news” that Hawthorne has offered to keep backstretch housing open to Thoroughbred licensees during the construction period, because Illinois is one of the few states that allows families to live on racetrack backstretches. Being able to stay at Hawthorne now means some families won't have to take their children out of the local school district in the middle of the year.

And Hawthorne will offer modified stabling to some Thoroughbred outfits.

“Even though we have harness racing at that time, some of [the Thoroughbred outfits] will be able to stay,” Carey said. “We have some bigger barns where they can stay, but [instead of training on the track] they walk or jog their horses a little bit instead of going to a farm or something like that.”

McCaffrey said the ITHA would “encourage Arlington to open their backstretch as soon as possible” for the 2020 meet that is scheduled to start Apr. 27.

“With no [racing] surface here in Chicago essentially from December until May, I'm positive that they're going to come to the realization to open as soon as possible to protect their meet,” McCaffrey said.

And what about the prospect of Arlington—which has a synthetic racing surface—racing earlier in the year to fill the six-month gap in the Illinois calendar? Did that topic come up in planning discussions?

Carey said it did, but that it won't happen.

“We have a dates agreement with Arlington and the horsemen, so there's no chance of that,” Carey said.

McCaffrey said that if those discussions did happen, the ITHA wasn't in on them.

“Listen, we're a horsemen's association, and we're made to feel like it,” McCaffrey said. “Arlington never called us before the deadline of [Wednesday] and Hawthorne called us [Wednesday]. So we had no input.

“In a perfect world, it would seem to me that racetracks and horsemen's associations would sit in a room and try to make each other's lives easier,” McCaffrey continued. “But it doesn't happen. I'm not saying we had any legal requirements to be included. It would just be idyllic if that happened. [Not being included in advance planning discussions] disappoints me, but it doesn't surprise me.”

McCaffrey was asked how many outfits he expects will leave to race elsewhere instead of hunkering down to wait it out while Hawthorne rebuilds.

“To the extent that a certain percentage leaves, practically every one of them will intend to come back,” McCaffrey said. “An Illinois trainer who's waited for this moment for 10 years is not going to move out of the state permanently because of a three-month hardship.”