Hall of Fame Announces 12 New Pillars of the Turf 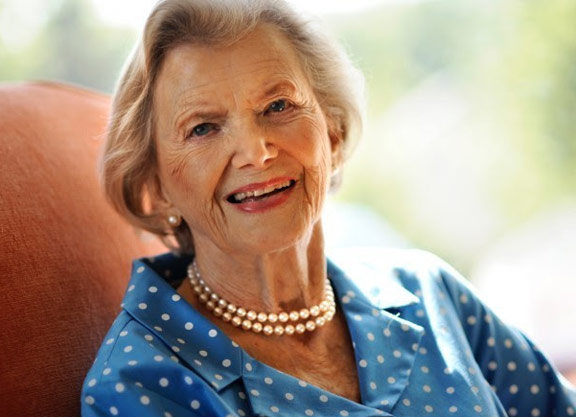 The 2018 Pillars of the Turf are as follows:

Elias J. “Lucky” Baldwin (1828 – 1909), owner of champions Emperor of Norfolk and Los Angeles and one of the first major breeders in California. He also opened the original Santa Anita racetrack.

Cot Campbell (born 1927), who began syndicating racehorses in 1969 and is considered the founding father of racehorse partnerships. His Dogwood Stable has raced more than 80 stakes winners, including 1990 GI Preakness S. hero Summer Squall and 2013 GI Belmont S. winner Palace Malice. A member of The Jockey Club, Campbell received the Eclipse Award of Merit in 2012.

Penny Chenery (1922-2017), who guided her family's famed Meadow Stud in Virginia and most famously campaigned legendary racehorse and Hall of Famer Secretariat. Chenery remained a prominent fixture in the racing community until her death last September.

John W. Galbreath (1897-1988), former owner of the Pittsburgh Pirates who oversaw the construction of the new Aqueduct Racetrack and rebuilding of Belmont Park. A member of The Jockey Club, he was involved in the purchases of both Hialeah Park and Churchill Downs. He founded important Kentucky nursery Darby Dan Farm in 1949.

Arthur B. Hancock, Sr. (1875-1957) founded Claiborne Farm in Paris, KY some 100 years ago and the nursery remains one of the world's foremost Thoroughbred operations today. A perennial leading breeder, he imported significant breeding stock from Europe, and had a major hand in shaping the breed both domestically and internationally.

Hal Price Headley (1888-1962), a Lexington, KY native who took over the management of his family's farms, Beaumont and La Belle, after graduating from Princeton in 1908. He would go on to become one of America's most significant breeders, breeding the champions Alcibiades, Apogee, Menow and Askmenow. He was one of the original organizers of Keeneland Race Course, and was its first president from 1936 to 1951. Headley was involved in establishing the Breeders' Sales Company, which later became part of Keeneland Association.

John Morrissey (1831-1878), born in Ireland, began Thoroughbred racing in Saratoga. A bare-knuckle boxing champion who later became a Congressman and New York State Senator, he amassed a fortune through gambling houses in New York City and the Saratoga area. He organized the first formal racing meet at Saratoga in 1863, and opened Saratroga Race Course the following year.

Dr. Charles H. Strub (1884-1958) was a Hollister, CA dentist who partnered with filmmaker Hal Roach to develop the Los Angeles Turf Club and Santa Anita Park. Through innovations like the inauguration of the well-funded Santa Anita H.–known as the “Big Cap”–California racing rose to prominence under Strub's leadership. Strub is credited with introducing finish line cameras, electronic timing and electronic starting gates.

William Collins Whitney (1841-1904), a politician who was introduced to racing by August Belmont II and John E. Madden, purchased his first racehorse in 1898 and had immediate success, winning the Belmont S. in 1899 with Jean Bereaud and the Epsom Derby in 1901 with Volodyovski. He spearheaded the restoration of Saratoga Racecourse, promoted the relocation of New York's premier yearling sale to Saratoga, and was also involved in the creation of Belmont Park. He bred three champions, and was instrumental in the establishment of Aiken, SC as a popular winter destination for racing stables.

Harry Payne Whitney (1872-1930) followed in his father William Collins Whitney's footsteps after purchasing much of the bloodstock from the dispersal of his late father's holdings in 1904. The younger Whitney went on to develop one of the most successful racing and breeding operations in America, breeding 192 stakes winners and an incredible 20 champions. He was leading breeder 11 times and leading owner eight times.

Cornelius Vanderbilt “Sonny” Whitney (1899-1992), son of Henry Payne Whitney, carried on the Whitney family legacy in both polo and racing. He won the U.S. Open polo title three times and acquired his father's breeding and racing stock in 1930, enjoying success with the likes of Equipoise, Top Flight, Phalanx and Counterpoint. He bred 176 stakes winners and five champions, and was one of the founders and first president of the National Museum of Racing. He was presented with an honorary Eclipse Award in 1984.