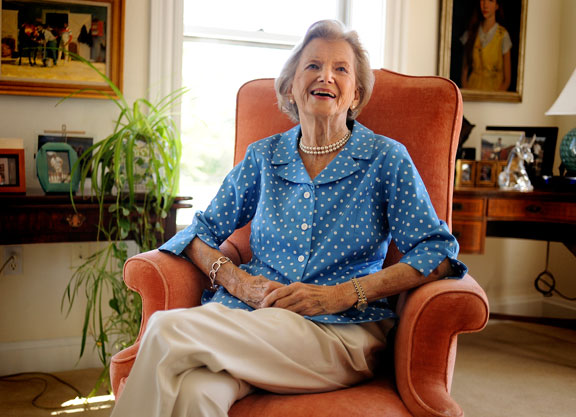 Penny Chenery at home in Boulder, CO, in 2010 | Getty Images

Helen Bates 'Penny' Chenery, who bred and raced 1973 Triple Crown winner Secretariat under the Meadow Stable banner, passed away Saturday at the age of 95 following complications from a stroke. Penny's children announced her death through Leonard Lusky, her longtime friend and business partner. Revered for both her stable's accomplishments on the racetrack as well as her class off the racetrack, Chenery became known as “The First Lady of American Racing” by many.

Born Jan. 22, 1922, in New Rochelle, New York, Chenery was immediately enamored with and was riding horses as early as age five.

“I had the horse bug,” she recalled. “I wasn't 'National Velvet.' Horses were just my friends.”

After attending high school in Virginia, Chenery attended Smith College in Massachusetts, graduating in 1943. Two years later, at the behest of her father, Southern Natural Gas Company founder Christopher Chenery, she volunteered to join the Red Cross, traveling overseas to assist soldiers–“You had to be 23 to go. They thought younger girls weren't mature enough. And they were right!”–she recalled, then enrolled in the Columbia Business School upon her return to the U.S. and was one of just 20 women in her class. During her time at Columbia, she met her future husband John Bayard Tweedy, whom she wed in 1949.

For the better part of the next two decades, Chenery lived an unassuming life as a housewife and mother in Denver while immersing herself into social, charitable, civic, educational and political pursuits, from the Junior League to Planned Parenthood. She and her husband helped raise the initial capital for the Vail ski resort, where Jack was the first Board Chairman and General Counsel, and Penny's father was a major investor.

Chenery's father, who had founded Meadow Stable, took ill in the late 1960s and passed away in early 1973. Original plans called for the sale of Meadow Stable, which had become unprofitable, but Chenery was keen on keeping a dream of her father's alive-namely a victory in the Kentucky Derby. She took over management of the racing stable, with the help of her siblings, Margaret Carmichael and Hollis Chenery, and her father's business secretary, Elizabeth Ham. Under the guidance of trainer Lucien Laurin, Meadow Stable's 1971 Eclipse Award-winning juvenile Riva Ridge turned those dreams into reality in the 1972 Run for the Roses before adding the Belmont S., but the best was yet to come.

Chenery was responsible for the breeding of Somethingroyal to Bold Ruler in 1969 and the resulting foal, named Secretariat, won seven of his nine starts at two in 1972, following his stablemate as champion 2-year-old. In 1973, Secretariat became the first Triple Crown winner in a quarter-century, punctuating the sequence with his towering 31-length success in the Belmont. In October 2010, the motion picture 'Secretariat' premiered with actress Diane Lane cast as Chenery. Chenery herself had a cameo in the movie as a fan at the Belmont.

In 1983, Chenery joined Martha Gerry and Allaire du Pont as the first women to be admitted as members of The Jockey Club and served the industry in a variety of roles, including president of the Thoroughbred Owners and Breeders Association (TOBA) and a member of the executive committee of the American Horse Council. She was also president of the Grayson-Jockey Club Research Foundation and was a driving force behind the creation of the Thoroughbred Retirement Foundation. In 2006, was the recipient of the prestigious Eclipse Award of Merit. In 2012, Chenery was the Honor Guest of the Thoroughbred Club of America's annual Testimonial Dinner.

“I am just tickled to win this award,” said Chenery of the Eclipse Award of Merit. “I've had a wonderful time in racing, with the fans, my peers, and of course, the horses. The greatest sight in racing is seeing your horse with your silks on coming down the stretch in the lead. The second greatest thing is seeing a foal born. That's God's gift to us.”

Chenery created the Secretariat Vox Populi Award annually honoring racing's most popular horse, as well as the Secretariat Foundation, which assists and supports various charities within the racing community. In recent years, she advocated for laminitis research and care advancement as well as efforts to ban the use of performance-enhancing drugs in racing, pledging her support to the Water Hay Oats Alliance as recently as recently as 2016.

In a testament to Chenery's wide-reaching influence on the game as a whole, numerous racing personalities took to Twitter and other forms of social media to express remembrances and reflections about her life Sunday.

“Whether as the owner of Secretariat, the brilliant Triple Crown Champion she campaigned nearly a half-century ago–or as a leader and ambassador for the sport she loved–Penny Chenery led an extraordinary life that touched Thoroughbred racing fans and others in a unique and personal way,” said NTRA President and CEO Alex Waldrop. “Thankfully, her legacy will live on for many generations to come.”

“We are deeply proud of our mother, her accomplishments, and her courage.” said daughter Kate Tweedy. “As we mourn her loss, the example of her strength, her intelligence, and her enduring spirit continue to inspire us.”

While the family requests that its privacy be respected for an initial week of mourning, Lusky says that plans for a future public memorial service will be announced soon.

“We have always been overwhelmed and amazed by the love and support Mom received from her many fans,” John Tweedy said. “We look forward to a time soon when we can celebrate her life in a way that honors that legacy.”

Click here for an interview with Chenery on the 40th anniversary of Secretariat's Belmont and Triple Crown victory.

A Fateful Flip of the Coin…

Though Christopher Chenery's Meadow Stud was the official breeder of the great Secretariat, the mating was actually planned by Penny Chenery. She entered into a unique foal-sharing arrangement to breed two mares each in 1968 and 1969 to Claiborne Farm's Bold Ruler, owned by the Phipps family. If two foals were produced, the Phipps family would retain one and the mare owner the other, with a coin flip to decide first pick. Chenery sent Somethingroyal (Princequillo) to be bred to Bold Riler in both years and the foal-sharing agreement between the two parties stipulated that the winner would receive first choice of the foals of 1969 while the loser would get first pick of those foaled in 1970. The coin toss took place in the fall of 1969 in the office of A.G. Vanderbilt, then chairman of the New York Racing Association, with Claiborne's Arthur 'Bull' Hancock serving as witness. Ogden Phipps won the coin toss and selected Somethingroyal's foal of 1969. A filly named The Bride, she never won a race. Chenery left with the rights to Somethingroyal's as-yet unborn produce, a colt foaled Mar. 30, 1970 who would become Secretariat.

Claiborne's Dell Hancock reflected on Chenery's relationship with the farm and family by phone Sunday afternoon.

“Her father and [Dell and Seth Hancock's] dad ['Bull' Hancock] were friends and daddy had advised Mr. Chenery on a lot of different decisions,” Dell Hancock recollected. “Our father had died when Secretariat was two and Seth was responsible for syndicating the horse and that syndication really set the tone and really made everyone take notice. I thank her for her loyalty to Claiborne and we treasure the long relationship we had with her. She was a beautiful woman, very well spoken and she did a great deal for our sport through her wonderful racehorse and more.”

Secretariat died Oct. 4, 1989 after a battle with laminitis and is buried at Claiborne. —Alan Carasso