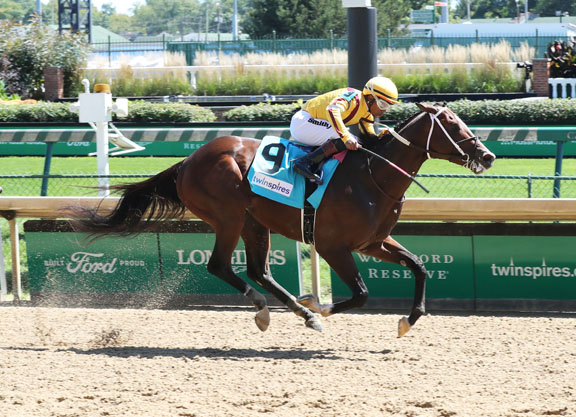 GSP Aurelius Maximus (Pioneerof the Nile–La Reina, by A.P. Indy) has been retired from racing and will enter stud in 2021 at Jay Adcock's Red River Farm in Coushatta, Louisiana. The deal was brokered by Andrew Cary of Cary Bloodstock. The 5-year-old, who will stand in a partnership between Nathan Granger and Stonestreet Stables/George Bolton/Peter Leidel, will stand for $2,000 live foal, with consideration to approved mares.

“Aurelius Maximus is the most exciting horse to retire to Louisiana for many years,” said Cary. “His combination of impeccable pedigree, gorgeous conformation and top-class ability on the racetrack make him a very tantalizing prospect for breeders in the southwest.”

Granger added, “We're very excited to get a horse of such talent and grit–not to mention his great looks. We're just as excited to partner with one of the premier ownership groups in the industry in Stonestreet Stables, Mr. Bolton and Mr. Leidel.”

Aurelius Maximus broke his maiden at Belmont Park by 7 3/4 lengths second time out before finishing fourth in the 2018 GI Champagne S. Sidelined afterwards, he kicked off 2020 with two professional allowance victories at Fair Grounds and Churchill Downs before finishing a neck to Mr Freeze (To Honor and Serve) in the GII Hagyard Fayette S. at Keeneland last October.

Aurelius Maximus was conditioned for his final four races by Hall of Fame trainer Steve Asmussen.

“Aurelius Maximus was an amazing physical,” he said. “He was super athletic and had tremendous heart. If his foals look like him, he'll make an outstanding sire.”

Stonestreet Stables bloodstock advisor John Moynihan, who purchased Aurelius Maximus privately as a 2-year-old, added, “Aurelius Maximus is among the most talented horses we've ever had at Stonestreet. He had legitimate Grade I ability, a ton of natural speed, and has an awesome physical to go with it.”