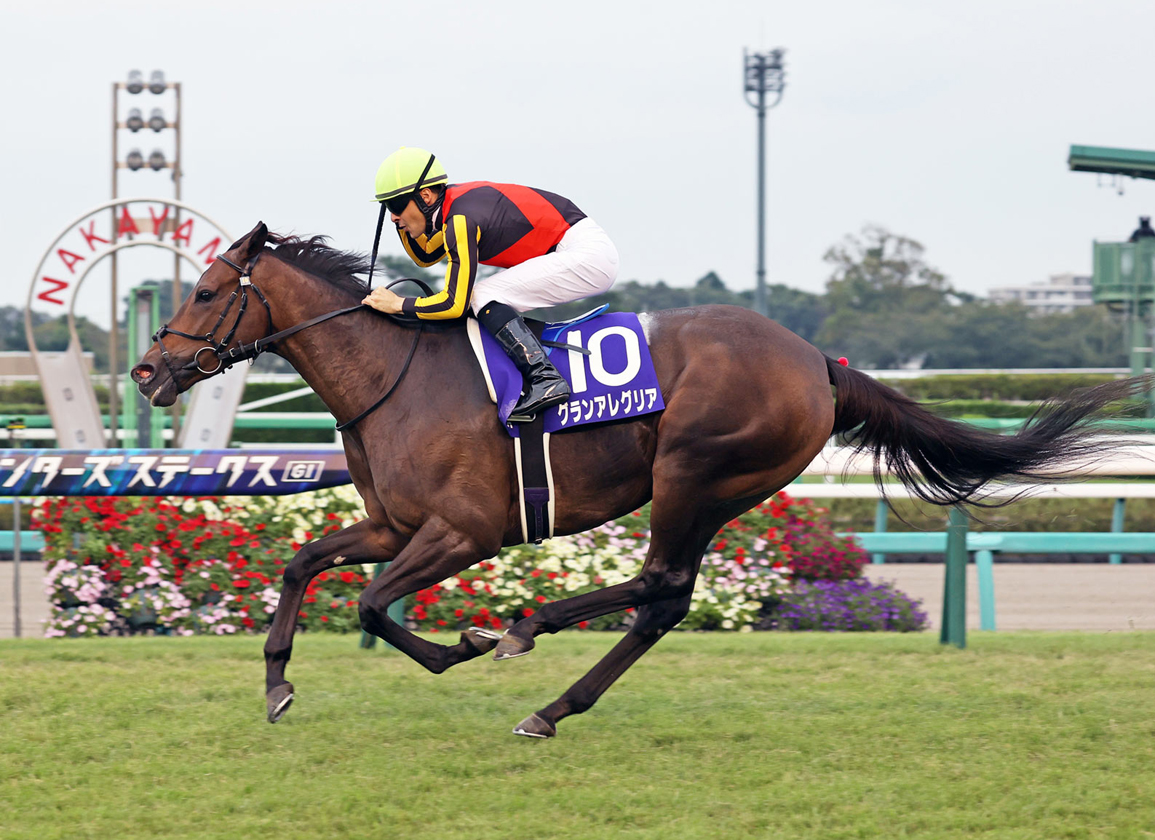 Tabbed the heavy favourite at 70 cents on the dollar, the 5-year-old mare was content to race near the rear of the field as Ho O Amazon (Jpn) (King Kamehameha {Jpn}) sped through fractions of :23.70 and :47.60. Jockey Christophe Lemaire had a ton of horse under him at all points in the race, and steered Gran Alegria out widest of all as the field entered the straight. Asked for her run, she responded under confident handling and steamed home to win easily by three-quarters of a length as much the best. Group 1 winner Schnell Meister (Ger) (Kingman {GB}) closed from midpack to report home second, a half-length to the good of Danon the Kid (Jpn) (Just a Way {Jpn}).

“I am relieved and happy,” said Lemaire, who was winning his 40th Japan Racing Association Group 1 and 1,500th race in the JRA's jurisdiction. The most important mission for me in her last run of her career was to bring out the best performance, her true form and she did just that. We were positioned a little further back but it didn't worry me much and she has this really good finishing speed at the stretch like she showed today.

“She's been a special horse since a 2-year-old, winning all those big races and today she showed us again that she's of a different class. I will miss her.”

A group winner at two and third in the G1 Asahi Hai Futurity S. against males in December of 2018, Gran Alegria made just three starts at three, taking the G1 Japanese 1000 Guineas in the spring and the G2 Hanshin Cup at the end of the year and was named Japanese Champion 3-Year-Old Filly. At four, Gran Alegria won three of her four appearances, starting with a second in the G1 Takamatsunomiya Kinen in March. She ended her year with three straight Group 1 wins-the June 7 Yasuda Kinen, Oct. 4 Sprinters S. and Nov. 22 Mile Championship en route to year-end honours as the Japanese Champion Sprinter/Miler. In 2021, she returned with a fourth in the Apr. 4 G1 Osaka Hai, prior to a victory in the G1 Victoria Mile on May 16. Second defending her Yasuda Kinen title in June, she ran third in the 2000-metre G1 Tenno Sho (Autumn) on Oct. 31.

Pedigree Notes
Gran Alegria is, in terms of Group 1 wins, the second most decorated progeny of the late Deep Impact (Jpn) after Gentildonna (Jpn), who has 53 Group 1 winners in total. The Northern Farm-bred is among his 179 worldwide black-type winners and 144 group winners. Tapit's broodmare sire career is going from strength to strength, and he also has the listed stakes winner and Group 3 placed Arusha (Jpn) by Deep Impact. Fifty-three progeny out of his daughters have won a black-type race, 24 of them are group winners and his very best so far has been the Mile Championship heroine from his seven Group 1 scorers.

The first reported foal out of the dual Grade I-winning turf star Tapitsfly, who also won the Breeders' Cup Juvenile Fillies Turf back when it was a listed race, Gran Alegria has a winning 4-year-old full-brother named Blutgang (Jpn) (Deep Impact {Jpn}). Her dam sold for $1,850,000 to Katsumi Yoshida out of the Fasig-Tipton November Sale in 2012. Tapitsfly's full-sister Flying Tipat (Tapit) was stakes placed at Indiana Downs, while the fourth dam, the winning Pink Dove (Argument {Fr}) was a half-sister to the 1990 GI Arlington Million hero Golden Pheasant (Caro {Ire}), who also took the Japan Cup in 1991.