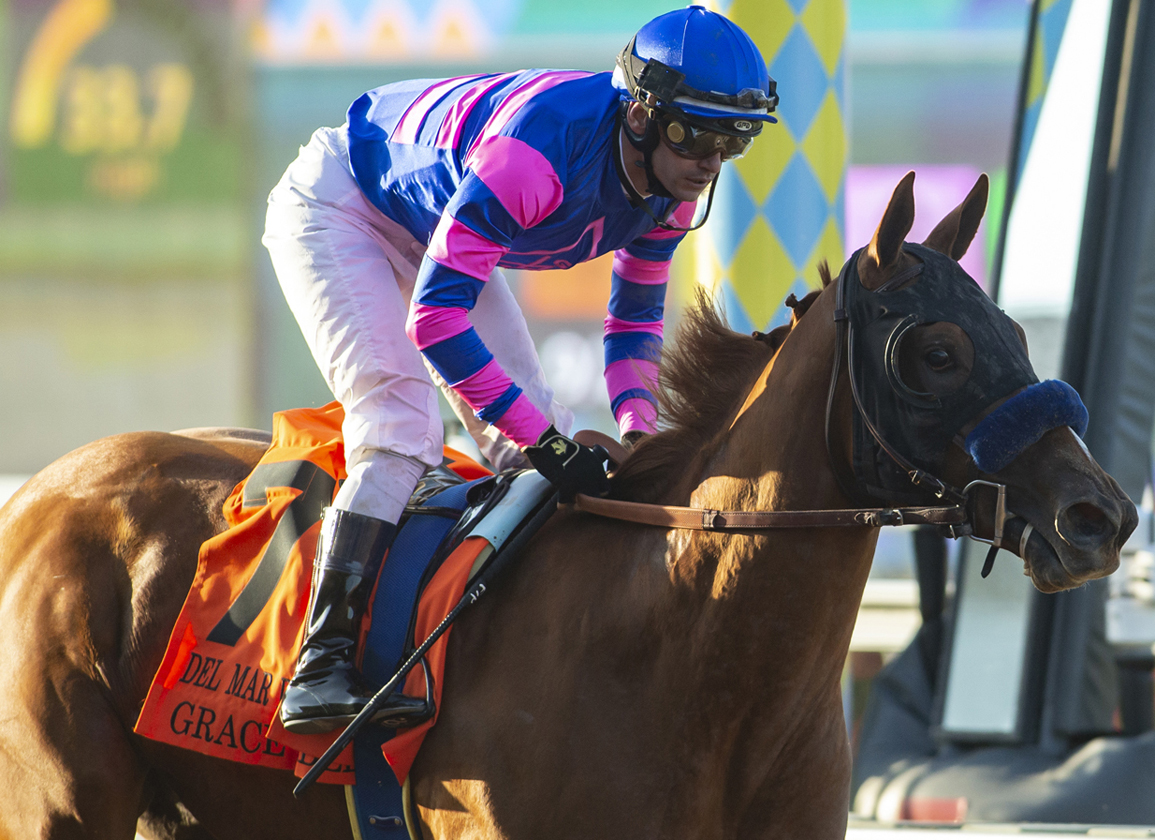 Grace Adler (Curlin) looks to take her record to three-for-three and provide Hall of Famer Bob Baffert with his 12th victory in Santa Anita's GII Chandelier S. Friday, a “Win and You're in Event” for the GI Breeders' Cup Juvenile Fillies in November. A debut winner at Del Mar July 31, the $700,000 FTKSEL purchase already secured her spot in the gate for the World Championships with a dominant late-running score in the Sept. 5 GI Del Mar Debutante S., which she won by 11 1/4 lengths over Dance to the Music (Maclean's Music). The chestnut did get the perfect set up that day–with a trio of speedsters leading to a pace collapse–but there is enough speed signed on here to give her a similar set up. This is Grace Adler's first try around two turns, but she is bred to run all day and her performance last out over seven furlongs suggested added distance would be no issue. Baffert–whose 12 wins in this event include five of the last nine renewals–also saddles a maiden of three starts in Censorship (Tonalist), who was second to Desert Dawn (Cupid) last out going a mile at Del Mar Aug. 26.

Several flashy first-out winners take on the more accomplished favorite here, including 'TDN Rising Stars' Electric Ride (Daredevil) and Ain't Easy (Into Mischief). Trained by John Sadler, Electric Ride pressed the pace early and blew her rivals away in the lane for an 8 1/2-length graduation in her six-panel unveiling at Del Mar Aug. 28, earning an 85 Beyer Speed Figure. A $400,000 KEESEP acquisition, the Phil D'Amato-trained Ain't Easy bided her time in mid-pack early, circled the field turning for home and charged clear to don cap and gown by 5 1/4 lengths in her sprint debut in SoCal Aug. 21. D'Amato also sends out GII Sorrento S. winner Elm Drive (Mohaymen), who was part of the early pace duel in the Del Mar Debutante and paid the price, fading to seventh.