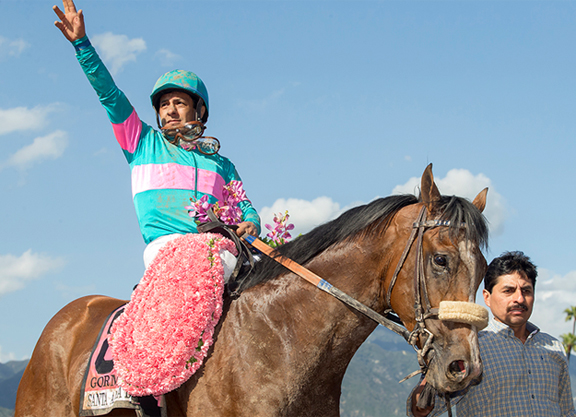 Gormley (Malibu Moon–Race to Urga, by Bernstein), winner of last year's GI FrontRunner S. and this term's GI Santa Anita Derby, has been retired from racing and will take up stud duties in 2018 at B. Wayne Hughes's Spendthrift Farm as previously announced.

A rare debut-winning juvenile for trainer John Shirreffs on behalf of Jerry and Ann Moss at Del Mar last September, the bay colt was a three-length winner of the FrontRunner at Santa Anita when stretched out a month later. He kicked off his sophomore season with a win in January's GIII Sham S., and added a second two-turn tally at the highest level when prepping for the GI Kentucky Derby in the nine-panel GI Santa Anita Derby this April. Fourth in the GI Belmont S., Gormley retires with earnings of $1,026,000 from a record of 9-4-0-0.

He is out of the stakes-winning Race to Urga, herself a daughter of Irish stakes winner and French Group 1-placed Miss Mambo (Kingmambo). Fourth dam Estrapade (Vaguely Noble {Ire}) was a MGISW.

“Malibu Moon continues to add to his legacy as A.P. Indy's best sire, so we're very excited to now be able to stand one of his best sons,” said Ned Toffey, General Manager at Spendthrift. “Gormley joins Orb as Malibu Moon's only multiple Grade I winners at stud, and Gormley is his sire's lone 2-year-old Grade I winner at stud. We believe he's a great opportunity for breeders through our Share The Upside program, and we invite everyone to come out and see him at the farm.”

Now available for inspection at Spendthrift, Gormley will be offered through the Lexington nursery's popular Share the Upside program. His Share the Upside fee will be $12,500 with a two-year commitment, and breeders will earn a lifetime breeding right to him beginning in 2020 after paying fees for two live foals. For the first time, Spendthrift is offering breeders the option of breeding two mares the first year in 2018, however, to earn the lifetime breeding right they must also breed at least one mare in 2019 free of charge.

Gormley's fee for those not interested in Share the Upside will be $10,000 on a standard stands and nurses contract.