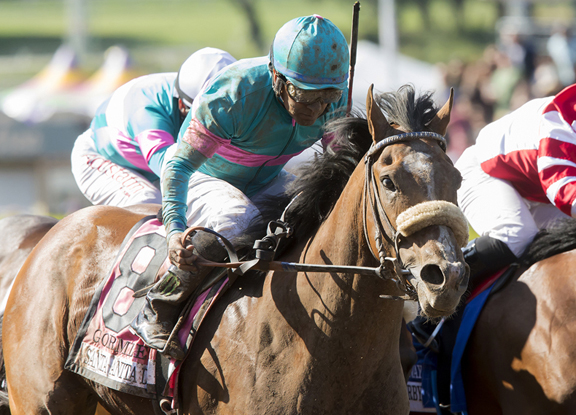 Last term's GI FrontRunner S. winner will stand at Spendthrift Farm in Lexington, KY, upon retirement. Bred in Kentucky by Castleton Lyons and Kilboy Estate, Gormley was acquired privately after RNA'ing for $150,000 as a KEESEP yearling.

“Malibu Moon has been A.P. Indy's best sire over the course of the last decade, and now we're starting to see him develop into a sire to sires through popular sons like Orb,” Spendthrift owner B. Wayne Hughes commented. “He has certainly been the marquee sire during this era of Spendthrift Farm, and we've waited for the right son to come along that we could bring to stud to stand alongside Malibu Moon. We are thrilled for that to be Gormley, whose precociousness, athleticism, class and good looks make him an exciting stallion prospect.”

Gormley, also the winner of this term's GIII Sham S. at Santa Anita, will continue to be owned and managed by the Mosses throughout the remainder of his racing career, and there is currently no timetable for his retirement. He will participate in Spendthrift's “Share The Upside” program upon retirement.

“Gormley is the best colt by Malibu Moon I've seen at the yearling sales, and John [Shirreffs] fell in love with him at Keeneland,” said bloodstock agent David Ingordo, who helped acquire Gormley privately for the Mosses as a yearling, and also brokered the breeding rights deal with Spendthrift. “Now, he's a Grade I winner at two, a Santa Anita Derby winner at three, and he comes into the Triple Crown as a major contender.”

Gormley is the first foal out of the grassy Gulfstream Park stakes winner Race to Urga. His second dam Miss Mambo (Kingmambo) was third in the G1 French 1,000 Guineas. Gormley currently boasts a career record of 6-4-0-0 and earnings of $920,000.