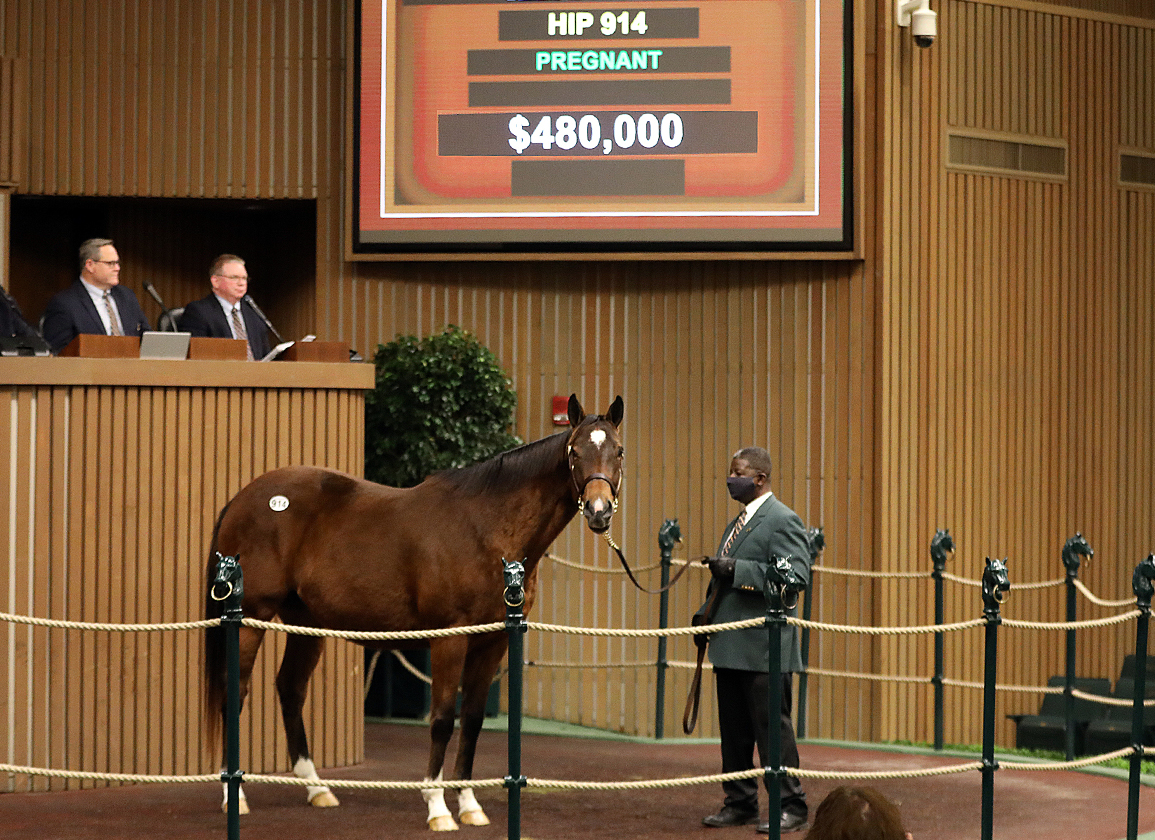 LEXINGTON, KY – The Keeneland January Horses of All Ages Sale continued Thursday with a third session dominated by mares from the Godolphin draft. Dan Hall, acting on behalf of Frank Stronach's Adena Springs, made the day's highest bid when going to $480,000 to acquire the unraced Crowning Jewel (Into Mischief). Sheikh Mohammed's operation, on track to earn the Eclipse Award as leading breeder of 2021, was responsible for three of the session's top four prices.

“It's hard to buy on the good stuff,” Hall commented after signing for the session topper Thursday. “It's very competitive.

I think it's carried over from November.”

“I think it's a very typical January,” Schumer said. “For the right mares, there can be what seems like unlimited funds. If you don't have what everybody wants, they fall right through the cracks. Personally, I think that broodmare prospects have been a little weak here. Whereas generally in January, they are what drives the market. But overall, it's a typical January sale.”

The session's top-priced short yearling was a daughter of Munnings (hip 1122) who sold for $105,000 to the internet bid of JDT Racing, LLC. The bay, out of Soul of Fashion (Perfect Soul {Ire}), was consigned by Bill Murphy. The filly was making her second trip through the ring after RNA'ing for $70,000 at last year's Keeneland November sale.

“She was in the November sale and we couldn't get $70,000 for her,” Murphy said. “She had some conjunctivitis. I decided to take her home and treat her and bring her back. She just really improved over the last two months. A lot of people were on her.”

Asked to access the strength of the yearling market this week in Lexington, Murphy said, “I would agree, it seems a little soft. We are tickled to death with what we got, but hearing from other people, it's been very difficult.”

The Keeneland January sale concludes with a final session beginning at 10 a.m. Friday.

“The pedigree is everything,” Hall said of the mare's appeal. “She is by Into Mischief and a half to Street Sense. It's just a great family. She was a typical-looking Into Mischief mare and it was a family that Frank wanted to get into.”

Hall had to see off a determined Eduardo Terrazas, bidding across the pavilion from him, to secure the mare. He admitted the final price, the first six-figure offering of Thursday's session, was a surprise.

“It was higher than I thought,” Hall said. “It got competitive, but when that kind of family walks up there, it's going to cost you.”

Crowning Jewel was Adena Spring's third purchase of the session. Also from Godolphin, the operation acquired Betty Grable (Into Mischief) (hip 886) for $35,000 and purchased Color of Dawn (Exaggerator) (hip 908) from the Elite consignment for $20,000.

“Frank loves the game. He's back into it now,” Hall said of Adena's future. “He just loves it.”

Crowning Jewel (hip 914), a daughter of Bedazzle (Dixieland Band), sold Thursday in foal to Street Boss. The mare also has a yearling filly by Bernardini.

“Street Boss is a known quantity. He has a lot of fans. But it was a surprise that the mare made as much as she did being in foal to Street Boss,” admitted Godolphin's USA Director of Bloodstock Michael Banahan. “That is a pretty big number for him. He has been very successful in Australia and I think we would have seen a different level of value on a mare in foal to him in Australia. He has been successful here; he has a GI Kentucky Oaks winner [Cathryn Sophia]. He gets you nice, solid horses.”

Banahan added of the mare, “She was well over what we would have appraised her for. We would not have thought she would make that much money at all. She was in on the right day [where] she stood out. Lots of people are interested in a young mare like her and by one of the best stallions in the country and with a solid pedigree. Being a half-sister to Street Sense, that was a big draw as well.”

“We try to keep a broodmare band where we can have about 100 2-year-olds every year,” Banahan said of the decision on which mares to offer at auction. “We work off that number. The ones that have not raced or not won are the ones that probably will go to a sale.”

He continued, “We bought Bedazzled early in her broodmare career, so we have daughters from her at home. Our tie-breaker for deciding which ones to keep is usually fillies who won on the track or if they have black-type. Crowning Jewel never made it to the races, so that was the tie breaker for her.”

Jay and Christine Hayden of Saintsbury Farm have been breeding high-class Canadian Thoroughbreds for over a decade, but recently added to their repertoire when purchasing the stallion Speightster (Speightstown–Dance Swiftly, by Danzig) to stand at Northern Dawn Stables in Hillsburgh, Ontario. Bloodstock agent Chad Schumer, who brokered the deal to bring the stallion to Canada, has been busy purchasing mares for the couple at this week's Keeneland January sale to support the new stallion.

Jay Hayden explained the decision to stand a stallion in Ontario started with the idea of providing another outlet for his mares.

“Originally, it was just because we would have mares that, based on their production history, didn't deserve to go back to Kentucky, but I didn't want to give up on them yet,” he explained. “So it fit for us–if we have an older mare that we don't want to give up on or say we had a mare who was just on the fringe of whether you want to cull her or not, to give her one more shot–we could do that with three or four mares a year. That was what started it all.”

Schumer saw a wider appeal to the region's breeders.

“When Chad and I talked about doing this, he said, 'What about the Ontario program?' I asked him if he thought there was enough demand. And he said, 'Looking at it right now, there is a lot of demand, probably a little bit of pent up demand for a new sire. Because there hadn't been a commercially proven stallion in a while.”

Schumer went to work to find a suitable candidate.

“We looked at a stallion prospect before the sale which we thought might work out and it didn't,” Schumer said. “And then Jay asked about stallions in Kentucky. I told him Speightster might be available. He didn't believe me at first. He's just a second crop sire and his numbers are good. We made an offer and it was accepted.”

Speightster, winner of the 2015 GIII Dwyer S., had been standing at WinStar Farm in Kentucky. Out of an unraced full-sister to champion Dance Smartly, he is the sire of five stakes winners, including Canadian stakes winners Dreaming of Drew and Aubrieta, as well as graded placed Tough to Tame.

“The market [in Kentucky] is so harsh, there is no room for patience,” Schumer said of the move. “Speightster's numbers are right up there with Frosted, Runhappy, Not This Time and Nyquist. I think he's right there with them, so that bodes well for his future.”

The 10-year-old stallion has settled in well at his new home.

“The horse has been really well received in Canada,” Schumer said. “They are getting tons of inquiries and probably already have 25 or 30 mares booked and it's still early.”

Hayden has been impressed by the reception Speightster has received.

“It has been a little overwhelming,” Hayden said. “Where he is going to stand, Sherry [McLean] talks to me about two or four people are calling her a day. My friend Bernard McCormack has also been fielding calls. He said the response from some of his clients has been great.”

While many of Saintsbury's 18 mares were already committed to 2022 mating plans when the Speightster deal went through, the Haydens are committed to supporting the stallion.

“Generally, as a commercial breeder, Jay likes a big, really attractive mare with a good cover and a good family,” Schumer said. “We have bought some really nice mares over the years. He has bred Breaking Lucky, a Canadian Classic winner and a Grade I horse and Unspurned, a graded stakes-winning mare. And commercially, he's had a lot of success. He has sold some expensive yearlings at Saratoga and some nice ones here [in Kentucky]. The operation has kind of paid for itself every year.”

Schumer continued, “For Speightser, we were looking for mares that obviously suited him on pedigree and then mares that made sense commercially because we want them to pay for themselves–hoping that the foals they are carrying will pay for the mare and support the stallion at the same time. In the case of the mare in foal to Medaglia, we paid $90,000 for her, but it's a $150,000 stud fee. If the Medaglia foal looks good, it will pay for the mare.”

While the Haydens are committed to supporting their new stallion, the couple will still remain focused on maintaining a commercial broodmare band.

“Fifteen of their mares are going to Kentucky,” Schumer said. “The ones we purchased here are going to Speightster. And then next year, some of his mares will shift to Speightster. We think it's important to remain commercial with some of his better mares. We have used horses like Charlatan, Maclean's Music, and top, top stallions, Uncle Mo and Justify. So I think we probably need to keep those mares in Kentucky, almost tier the program.”

The Haydens are taking advantage of positive movement in the Canadian breeding and racing industry, according to Schumer.

“Some great things are happening at Woodbine–the purses have gone up,” he said. “I think it makes a lot of sense to breed and race in Canada. There are some are very good incentives to bring mares into Canada and Jay is taking advantage of all of that. By buying Speightster, we bring in one of the top stallions in Canada. He's young and there is a lot to look forward to. There are some really big crops from WinStar that are coming, so I think his numbers will continue to rise. He's out of a half-sister to Smart Strike who was a late-developing stallion himself. We just think in another year or two, Speightster could look like a really smart move.”