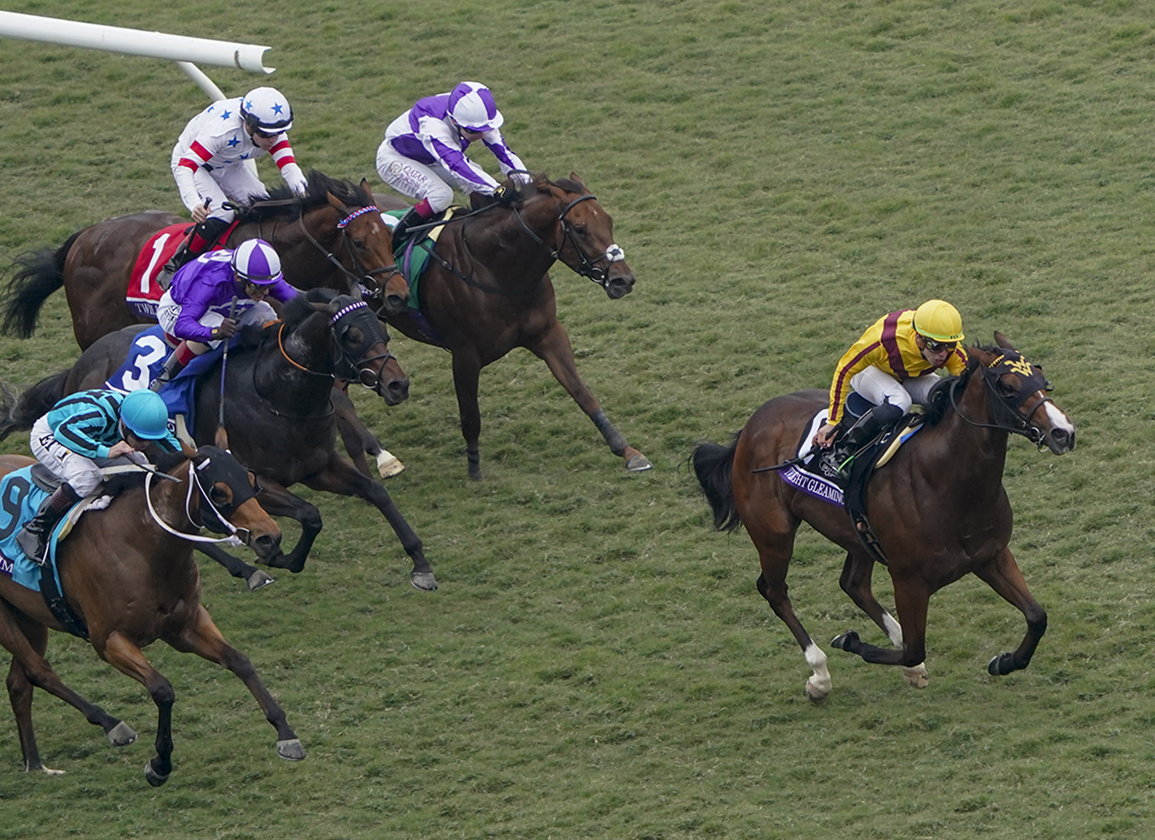 Stonestreet Stables LLC's 'TDN Rising Star' Twilight Gleaming (Ire) (National Defense {GB}), less fancied than her unbeaten stablemate Averly Jane (Midshipman), out-footed them all early and held the cavalry charge off late to provide both trainer Wesley Ward and Irad Ortiz, Jr. with their third-straight renewal of the GII Breeders' Cup Juvenile Turf Sprint in its four-year history. European colt Go Bears Go (Ire) (Kodi Bear {Ire}) was a half-length back in second, with another Ward-trained filly Kaufymaker (Jimmy Creed) spicing up the trifecta. Derrynane (Quality Road) came from far back to be fourth, with Averly Jane settling for fifth but giving fillies four of the top five spots.

A debut second at 3-5 when unveiled on the Keeneland dirt in early April, £75,000 Goffs Orby yearling buy Twilight Gleaming took to the Belmont turf next out in May, airing by an emphatic 7 1/2 lengths over another Ward runner in next-out winner and subsequently MSP Poppy Flower (Lea). Twilight Gleaming checked in second to Monday defection Quick Suzy (Ire) (Profitable {Ire}) when favored for Royal Ascot's G2 Queen Mary S. June 16, and had been unseen since narrowly annexing the listed Prix de la Vallee d'Auge over soft Deauville ground Aug. 7.

Carrying the colors of recently named Breeders' Cup Chairwoman Barbara Banke, Twilight Gleaming out-broke the field by about a length before being joined to her outside by Speakeasy S. winner One Timer (Trappe Shot). She doled out an opening quarter of :21.61, and starter to leave her nearest pursuer under confident handling into a :44.03 half. The closers got going in the final furlong, but were left with too much to do, and too tough a target.

“I think the way my filly broke over there… we won the race right there,” Ortiz said. “I didn't have to use much, I just got her on the rail and she did the rest, really. She's a nice filly.”

“I was really confident in this filly,” Ward said of the winner. “I feel bad for the other two owners because we are all trying to win, but this filly, she had good spacing from her win in France and every work at Keeneland just kept getting better and better. She was coming into it just fresh and fit and ready to go and she did it.”

Ward continued, “And, I'm not just saying this because she's Barbara Banke, but Barbara has been a loyal supporter of ours and she really got the itch to go over to England. We got some good horses and Ben McElroy got this filly for her and we bought some others for next year to go to Ascot with and I'm excited to see those. She's just such a great lady and she loves the sport. We are really excited.”

“She's been training really, really and she just looked terrific and she's really smart,” Banke said of Twilight Gleaming. “And you could tell she was just figuring it out. She wasn't hot or bothered or, but she was ready to rumble and she did.”

As for the beaten favorite, rider Tyler Gaffalione said, “She broke sharp, but she just didn't really get it going. I looked to my inside and outside and I was already getting outrun. She wasn't grabbing the bit on me so I dropped my hands to see if she will take me a little bit. She did, but she just didn't have it today.”

Pedigree Notes:
A stakes winner in both Europe and America, Twilight Gleaming is the only black-type winner and now the only graded winner so far from the small first crop of National Defense, a son of Invincible Spirit (Ire) who took the G1 Prix Jean Luc Lagardere over a mile at two before taking up stud duties at Irish National Stud (he also shuttles to Australia).
Twilight Gleaming is the 59th graded scorer and one of 95 black-type winners out of a daughter of Dansili. Her dam Thames Pageant is a daughter of SW & MGSP Golden Stream, who is also the dam of GSW Reach For The Moon (GB) (Sea the Stars {Ire}). Her third dam is MGSW Phantom Gold (GB) (Machiavellian). Thames Pageant produced a Sioux Nation colt in 2020 and a Phoenix of Spain (Ire) filly in 2021.