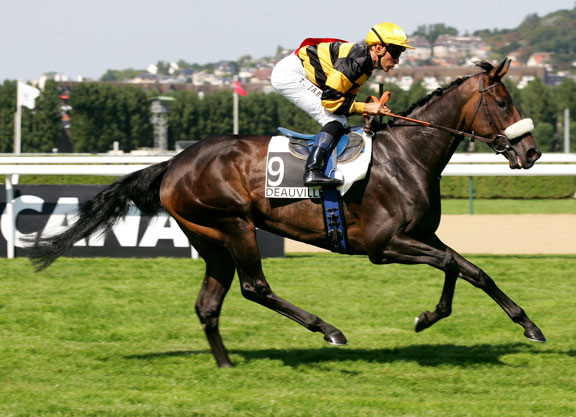 The Yoshida brothers' reputation of farming the best broodmare prospects globally for their elite collection on the island of Hokkaido has been well documented. And while they have enjoyed top-level success with runners from as far afield as the U.S. and Argentina and various parts of Europe, they have experienced a particular purple patch as of late with the progeny of mares sourced from France.

When Fierement (Jpn) (Deep Impact {Jpn}) defended his title in the two-mile G1 Tenno Sho Spring on May 5, he became the third Group 1 winner in the span of five months bred by Katsumi Yoshida's Northern Farm from a mare sourced from France. The dams of Fierement and triple Group 1 winner Admire Mars (Jpn) (Daiwa Major {Jpn}) were purchased at Arqana's December Breeding Stock Sale, while the mare that produced last year's Japanese Horse of the Year Lys Gracieux (Jpn) (Heart's Cry {Jpn}) was a private purchase.

Yoshida had purchased Fierement's dam, Lune d'Or (Fr) (Green Tune), from her breeder Haras du Mezeray in Deauville in 2010 for €750,000-the sale's second-highest price, bettered only by the €800,000 paid by Yoshida's brother Teruya of Shadai Farm for the dual Group 3 winner Celimene (Ire) (Dr Fong). Lune d'Or is the third generation of her family to be bred by the Moussac family at Mezeray; her second dam, the listed-winning Viole d'Amour (Luthier {Fr}), is responsible for the French champion miler Luth Enchantee (Fr) (Be My Guest), while her first dam Luth d'Or (Fr) (Noir et Or {GB}) won the Listed Grand Prix de Compiegne and was twice group-placed before producing Lune d'Or and the listed-placed Archange (Trempolino). Lune d'Or was a classy runner for trainer Richard Gibson, winning the G2 Prix de Malleret and G2 Prix Pomone at three before defeating older mares in Italy's G1 Premio Lydia Tesio, and at the time of her purchase she had four foals on the ground and was reportedly in foal to Galileo (Ire).

Lune d'Or's first few years in the Land of the Rising Sun weren't entirely unproductive, but made few headlines. A foal was not registered from the Galileo covering, and her first live foal in Japan, the filly Lunatique (Jpn) (Deep Impact {Jpn}), failed to make it to the races. Her 2014 filly Revoir (Jpn) (Heart's Cry {Jpn}), however, won three times, and she was followed by Fierement. It is worth noting, too, that the horse Fierement got up to beat by a nose in the Tenno Sho, Stiffelio (Jpn) (Stay Gold {Jpn}), is out of the 2008 G1 Cheveley Park S. winner Serious Attitude (Ire) (Mtoto {GB}), a private purchase by Shadai.

Lune d'Or's current 4-year-old Last Noodle (Jpn) (Orfevre {Jpn}) has won twice and her 3-year-old Route d'Or (Jpn) (Just A Way {Jpn}) showed promise last year with a five-length debut score at Tokyo. She has a 2-year-old filly by Deep Impact, a yearling by him and was covered last year by the Japanese Guineas/Derby winner Duramente (Jpn) (King Kamehameha {Jpn}).

Meanwhile, the page has continued to develop in Europe too. Lune d'Or's first foal, the unplaced German-bred mare Learned Friend (Ger) (Seeking The Gold), produced Inns Of Court (Ire) (Invincible Spirit {Ire}), who won group sprints in France at three, four and five for Godolphin and who is standing his debut season at Tally-Ho Stud this year.

That 2010 sale marked the first time the Yoshidas topped Arqana's December showpiece-in fact, they secured between them the top three lots, with Patrick Barbe also buying the €700,000 La Boum (Ger) (Monsun {Ger}) on behalf of Shadai-and they have rarely been missing from the top of the market at the sale ever since. Katsumi Yoshida topped the sale in 2014 with the purchase of the €1.1-million Alterite (Fr) (Literato {Fr}), and while that Grade I winner's first two foals are both winners, it is another mare Katsumi purchased through Narvick International about an hour earlier on the same evening for €480,000, Via Medici (Ire) (Medicean {GB}), who has made a faster start. The 2010 G3 Prix De Lieurey victress had already produced two foals by the time she went through the ring in Deauville in foal to Dansili (GB), and both of those have won listed races in France: Via Pisa (Fr) (Pivotal {GB}) and Via Firenze (Ire) (Dansili {GB}). The resulting foal from her 2014 Dansili covering, Freccia (Jpn) (Dansili {GB}), won three times in Japan.

Admire Mars was Via Medici's first Japanese-conceived progeny, and he was that country's champion 2-year-old in 2018 after winning the G1 Asahi Hai Futurity. Reverted back to a mile after failing to see out the extra two furlongs of the G1 Satsuki Sho the following season, he rewarded connections with two more Group 1 wins over the shorter trip in the NHK Mile and the Hong Kong Mile. Via Medici's current 3-year-old is the Kinshasa no Kiseki (Jpn) filly Aloha Nui Loa (Jpn), who has run once, while she has a 2-year-old filly by Duramente, a yearling daughter of Heart's Cry and was bred to Daiwa Major last year.

Via Medici's dam, the G3 Prix des Reservoirs winner Via Milano (Fr) (Singspiel {Ire}), was purchased at Tattersalls December in 2004 by Andreas Putsch's 6 C Racing as a filly in training. Her new owners covered her the following season with Tiger Hill (Ire), with that resulting colt never being named, and they bred Via Medici out of her the following year before she went back through the ring at Tattersalls and was signed for by Putsch's Haras de Saint Pair for 55,000gns in foal Holy Roman Emperor (Ire). Saint Pair has since bred three more stakes horses out of Via Milano including the G3 Prix Imprudence winner and G1 Prix Rothschild second Via Ravenna (Ire) (Raven's Pass) and the G3 Prix Vanteaux third Via Manzoni (Ire) (Monsun {Ger}). Via Manzoni's Lope de Vega (Ire) 3-year-old filly, Via Liguria (GB), ran third in her Saint-Cloud debut on Tuesday for Saint-Pair and Jean-Claude Rouget.

Lys Gracieux became the latest international Group 1-winning filly to come off the Japanese conveyor belt last year, with a G1 Cox Plate victory in Australia bookended by domestic scores in the G1 Takarazuka Kinen and G1 Arima Kinen earning her the Horse of the Year statuette. Her dam Liliside was, like Via Medici, a foal of 2007 and was bred by the Lepeudry family at Elevage de Tourgeville just outside Deauville. Liliside was largely unheralded at the 2008 Arqana October Yearling Sale when bought by MAB Agency for €39,000, but her pricetag would have been much greater when Katsumi Yoshida bought her privately midway through her 3-year-old campaign.

Liliside had won a pair of listed races, besting the eventual GI Breeders' Cup Filly & Mare Turf winner Zagora (Fr) (Green Tune) in the Listed Prix La Camargo, in 2010 before she saw defeat snatched from the jaws of victory in the G1 Poule d'Essai des Pouliches when demoted from first to sixth for interference. It was after a fifth in the G2 Prix de Sandringham next out that Yoshida swooped to secure Liliside privately, and she added a win in ParisLongchamp's Listed Prix de la Cochere going a mile in his colours before being packed off to Hokkaido. Her first six foals are all fillies-and five are winners–with Lys Gracieux the third in that lineup and the lone stakes winner thus far. Liliside has a 2-year-old by Heart's Cry, a yearling by him and was bred last year to Lord Kanaloa (Jpn).

While Katsumi Yoshida had to source Liliside privately, he wasn't about to let one of the mare's close relatives slip through his grasp when she came on the market at Arqana December in 2018. At the time Lys Gracieux was less than a month removed from her first Group 1 win in the Queen Elizabeth II Cup, and Lily's Candle (Fr) (Style Vendome {Fr})-a daughter of Liliside's half-sister Golden Lily (Fr) (Dolphin Street {Fr}) also bred by the Lepeudrys-had done her part to boost the family in France by winning the G1 Prix Marcel Boussac on the G1 Prix de l'Arc de Triomphe undercard. Katsumi laid out a sale-topping €1.1-million for Lily's Candle, who ran just once last year when trailing the field in the G3 Prix de la Grotte.

While his brother has stolen the headlines as of late, Teruya Yoshida could be the one making the news this spring with the produce of a mare bought privately from France, namely the 2014 G1 Prix de Diane and Pouliches winner Avenir Certain (Fr) (Le Havre {Ire}). Her first foal is the Deep Impact filly Des Ailes (Jpn), who extended her record to two for two last weekend with a victory in the Listed Sweetpea S. and who is a major contender for the G1 Yushun Himba (Japanese Oaks) on May 24. Avenir Certain has a yearling filly by Deep Impact and was one of the small number of mares covered by him last season before his injury and subsequent death.

Teruya Yoshida has not kept his admiration for Le Havre a secret: as detailed by Emma Berry early this week in the Weekly Wrap, Yoshida also privately secured another dual Classic-winning daughter of the sire, La Cressonniere (Fr), as well as her dam, Absolute Lady (Ire) (Galileo {Ire}). The latter remained in France to visit Le Havre on another two occasions after her purchase before later being exported to Japan. La Cressonniere has 2-year-old and yearling colts by Shalaa (Ire) and Golden Horn (GB) and visited exciting young sire Epiphaneia (Jpn) in her first season in Hokkaido last year, while Absolute Lady has a yearling colt by Deep Impact and last year visited Just A Way.

France has clearly been a happy hunting ground for the Yoshida brothers, each of which purchased a mare from the middle market in Deauville last December: Teruya took home the well-bred French listed winner Qualisaga (Fr) (Sageburg) for €380,000; Katsumi secured Elaya (Fr), a full-sister to triple Group 1 winner Ervedya (Fr) (Siyouni {Fr}) for €260,000 and Haruya-the youngest of the three sons of famed Japanese breeder Zenya Yoshida-bought the G1 Preis Der Diana third Wonder of Lips (Ger) (Champs Elysees {GB}) for €350,000. Another Hokkaido nursery, Lake Villa Farm, took home the listed-winning Joplin (Ger) (Solider Hollow {GB}) for €300,000. With plenty of young mares still in the pipeline and much to look forward to from the proven producers, it is likely the Japanese breeding industry's French chapter is not yet nearly finished.