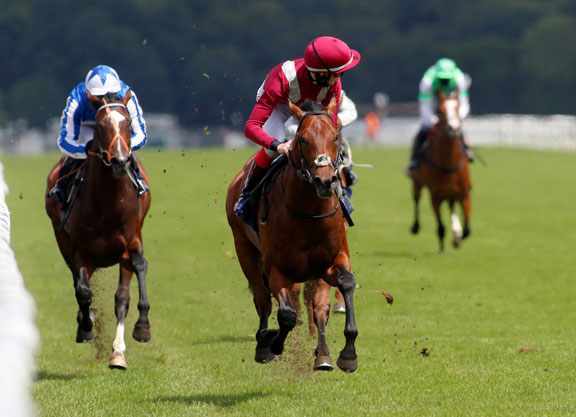 It took a while for the penny to drop, but when it did Prince Faisal's homebred Seventh Kingdom (GB) (Frankel {GB}) was a class above going a shade over seven furlongs in Saturday's Betway Novice S. at Doncaster, earning a TDN Rising Star tag with a daylight triumph. He was caught napping at the break, but recovered to track the leaders in third after the initial strides. Niggled along to keep his mind on the task at hand from halfway, the well-backed 6-5 favourite swooped for control passing the quarter-mile marker and lengthened further clear of toiling rivals in the closing stages to outclass Longlai (Fr) (Shalaa {Ire}) by a geared-down four lengths in taking fashion.

“He's got a very good mind, he's a very laid-back horse in general and that was a pleasing debut,” said rider David Egan. “He was lucky in that they didn't go a quick pace early on because he was slowly away and quite green for the first half of the race. It took him a while to get into his stride, but once he did so in the last two furlongs he lengthened right away from the field.”