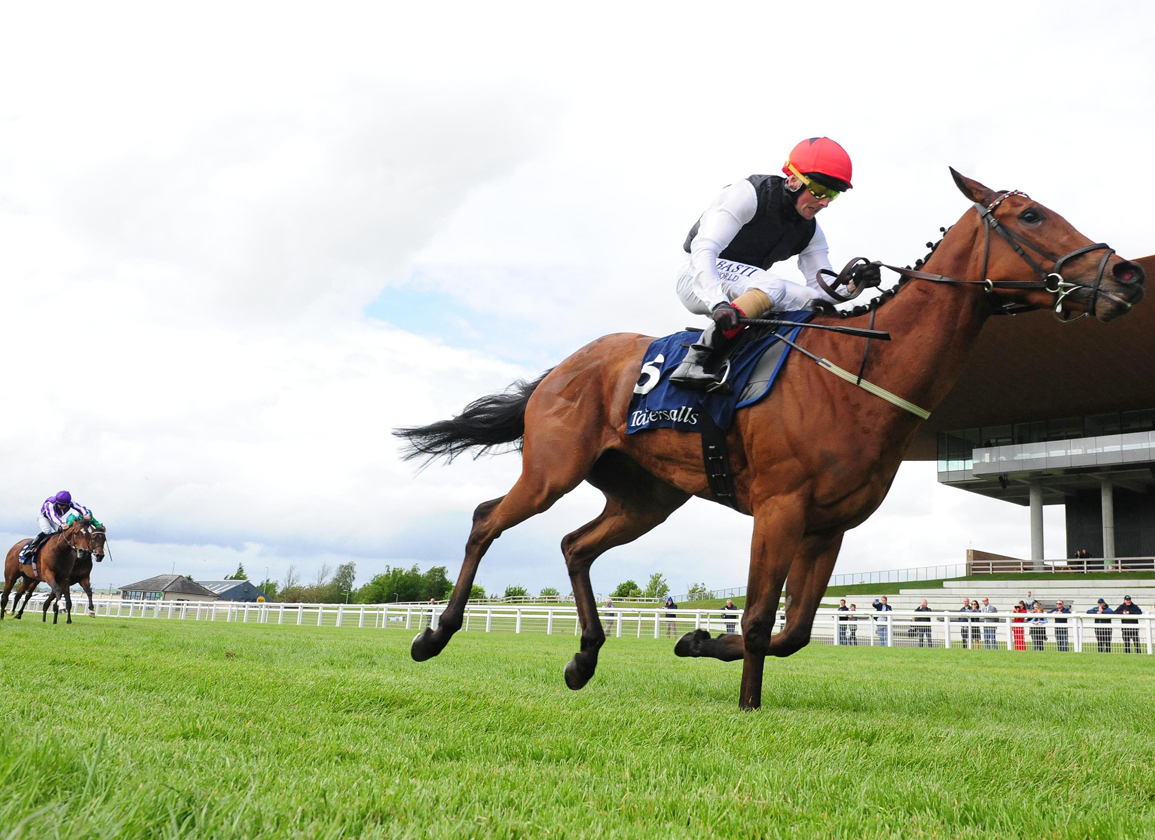 Kept back from the 1000 Guineas and Poule d'Essai des Pouliches, Moyglare Stud's TDN Rising Star Homeless Songs (Ire) (Frankel {GB}) was finally let loose on unsuspecting victims lined up for what appeared to be a competitive edition of the G1 Tattersalls Irish 1000 Guineas at The Curragh on Sunday. Travelling like the best filly the whole way settled in rear of mid-division by Chris Hayes, the 11-2 shot who had offered tantalising insight into what was to come when taking the seven-furlong G3 Ballylinch Stud 1000 Guineas Trial at Leopardstown Apr. 2 produced explosive acceleration down the outside to chop down the 11-4 favourite Tuesday (Ire) (Galileo {Ire}) a furlong from home. At the line, the Dermot Weld-trained homebred had stretched the measurement of her superiority to 5 1/2 lengths from Ballydoyle's number one, with another from that operation Concert Hall (Ire) (Dubawi {Ire}) running an eye-catching Oaks trial half a length back in third.

“She is very talented and has a lot of pace, but she's not the easiest to keep right,” her master trainer announced in the aftermath of receiving a warm welcome from the appreciative crowd in the winner's enclosure following his 20th Curragh Classic victory. “I've always had the highest confidence in the filly, but I wasn't prepared to run her until she was right and conditions were right and it is beautiful ground today. Chris got her relaxed and gave her a beautiful ride–the only question was whether she would stay a mile, as she has pace to win a group 1 race over six furlongs, but this was the best place to find out.”

Stamped a TDN Rising Star with a debut defeat of Agartha (Ire) (Caravaggio) in what has turned out to be a prescient seven-furlong maiden at Leopardstown in July, Homeless Songs was returning to the scene of the first of two subsequent disappointments when fifth in the G1 Moyglare Stud S. in September. Only sixth in the G3 Killavullan S. back at Leopardstown the following month, the homebred had come back with a clean slate for the latter venue's 1000 Guineas Trial and swept aside Agartha on three-pound better terms to re-establish her reputation. This was much the same in terms of performance, if super-sized to fit the occasion.

Unsurprisingly, Agartha who was at levels this time was in the thick of it again heading to the furlong pole where Joseph O'Brien's solid yardstick was coming off slightly worse in her private argument with Tuesday. What happened in the next dozen seconds was as dramatic as it gets in a fiercely-contested Curragh Classic, as both high-class fillies were swamped and left for dead by the relentless winner. Homeless Songs covered the mile almost a second faster than the year-older Pearls Galore (Fr) (Invincible Spirit {Ire}) had carrying the same weight in the preceding G2 Lanwades Stud S. and when weight-for-age is taken into account, the cherry is on the cake where this magnificent display is concerned.

Chris Hayes said, “Where we were drawn is probably the best of the ground. When the draw came out the other day, I was nearly leaping up and down inside in Rosewell! She has an extraordinary turn of foot and the last thing I wanted to do was to be looking for gaps. She likes a little bit of room and you saw what she can do. There was talk that she would be better with a bend and this and that. My only concern coming into today was would I get a clean run of things. Staying a mile and the ground made no difference, as she is a special filly.”

For Weld, the occasion brought rise to many emotions as he pondered the loss of Pat Smullen. “Today would have been his birthday and I saw his picture on the racecard and recalled that he won at stakes level on her dam. He also won this on Nighttime for my late mother in 2006, so it's very poignant,” he said, before his attention was turned back to Homeless Songs' immediate and long-term future. “We'll see how she comes out of this and speak with Eva Maria [Bucher-Haefner], but obviously the Coronation at Royal Ascot has to be considered,” he added. “That is my 27th European Classic and my fifth time to win this race and every Classic is very special and difficult to win. She's a very special filly and she is likely to be around next year–there's every chance.”

Homeless Songs, bred on the same cross as Adayar (Ire), gives Frankel his 21st group 1 winner and hails from a high-achieving family that keeps delivering on the big stage. She is the second foal out of the talented Joailliere (Ire) (Dubawi {Ire}), who was denied the chance to show her true merit and ended up only ninth in this in 2015 on her second start after an emphatic debut win. Off until her 4-year-old campaign, she was placed in the G3 Concorde S., G3 Park Express S. and G3 Gladness S. before winning the Listed Frankfurt Sprint Trophy. Kin to the G3 Meld S. and G3 Dance Design Fillies' S. winner Carla Bianca (Ire) (Dansili {GB}) and the G2 Beresford S. runner-up True Solitaire (Ire) (Oasis Dream {GB}), her first foal was the Listed Orby S. winner Reve de Vol (Ire) (Siyouni {Fr}), who was also placed in the G2 Champions Juvenile S. and G3 Royal Whip S.

Joailliere is out of the Listed Finale S. winner Diamond Trim (Ire) (Highest Honor {Fr}), whose progeny list is headed by the triple group 3 winner and G1 Irish St Leger runner-up Profound Beauty (Ire) (Danehill) who in turn produced the Listed Platinum S. winner and G3 Athasi S. runner-up Rose de Pierre (Ire) to a mating with Dubawi. Diamond Trim is a granddaughter of the GI Acorn S. winner Aptostar (Fappiano), as well as being a half to the G2 Ribblesdale S. winner Irresistible Jewel (Ire) (Danehill), in turn the dam of the Irish St Leger hero Royal Diamond (Ire) (King's Best), fellow Ribblesdale scorer Princess Highway (Street Cry {Ire}) and Mad about You (Ire) (Indian Ridge {Ire}) who was second in this Classic. Joailliere's 2-year-old colt Time Tells All (Ire) is by Sea the Stars (Ire), while she also has a yearling full-brother to Homeless Songs.