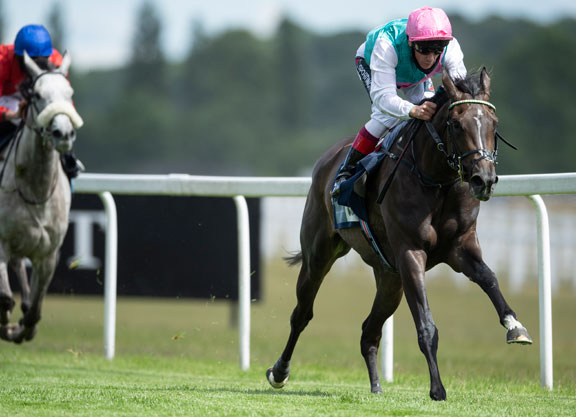 John Gosden again has a now-customary clutch of high-class prospects among his 3-year-old fillies in 2020 and Juddmonte’s Franconia (GB) (Frankel {GB}) was the latest to join in when winning Saturdays Listed Abingdon Fillies’ S. at Newbury in the style of a ready-made Oaks contender. Sent off the 7-4 favourite despite having only finished second in a seven-furlong novice at Chelmsford in November, the homebred travelled strongly in a share of third off the honest pace and when sent to the front passing the two-furlong pole by Frankie Dettori drew away to beat TDN Rising Star Cabaletta (GB) (Mastercraftsman {Ire}) by 3 3/4 lengths, with Chamade (GB) (Sepoy {Aus}) 1 3/4 lengths behind in third.

“She has come here from finishing second at Chelmsford last year so it is all a bit of a jump, but we will see how she takes it all as she is very young in her mind,” trainer John Gosden said of the bay half-sister to the G1 Nassau S. winner Winsili (GB) (Dansili {GB}). “Her sister was pretty lively and she is the same. There is plenty of ability there, we will just see how we play it. You don’t normally go from a second at Chelmsford to a listed. We have just missed those two races prior to anything big. She has plenty of ability, but she is highly-strung.” Despite obvious talk of the G1 Epsom Oaks afterwards, her handler was keen to play that down for now. “The ability is there as her sister Winsili won a Nassau, but we have just got to be sensible how we handle her. I think the [G3] Musidora [at York July 9] would be a logical step rather than launching straight into the deep end.”