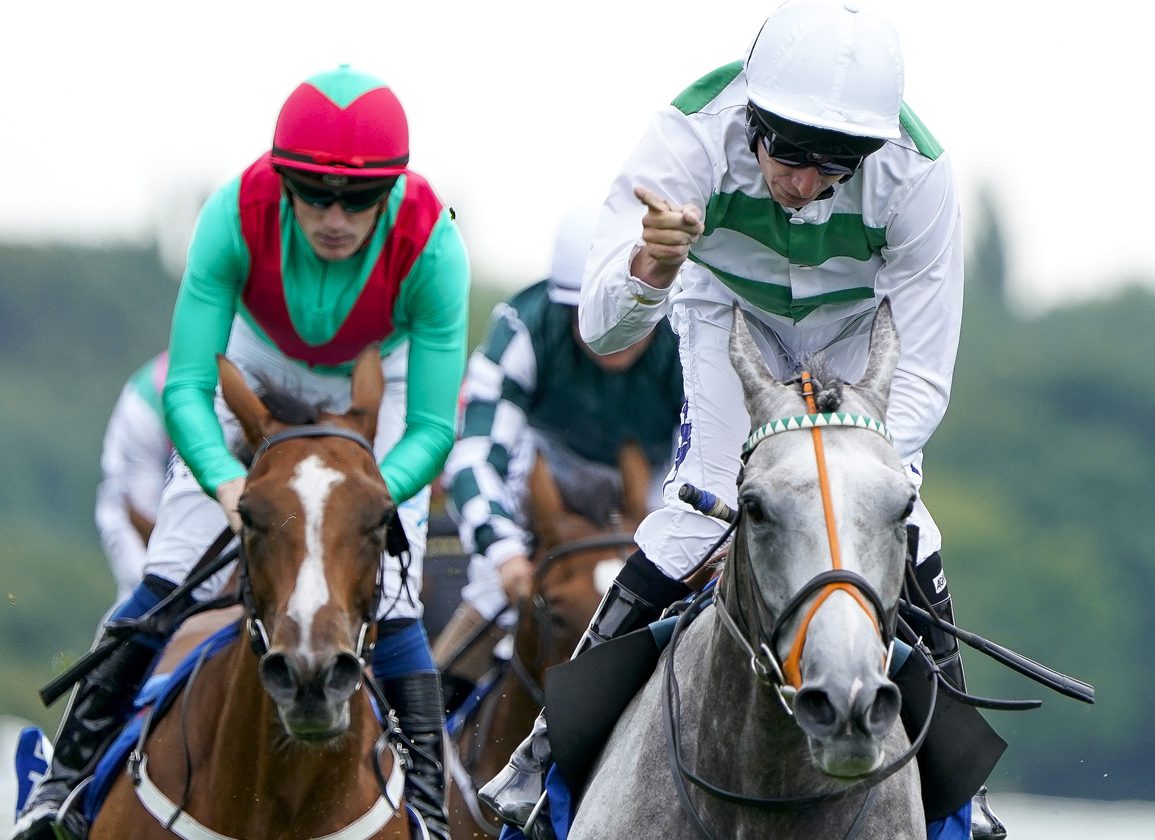 Kirsten Rausing's homebred 5-year-old mare Alpinista (GB) (Frankel {GB}), unbeaten through five tests last term, disposed of esteemed rivals in last month's G1 Grand Prix de Saint-Cloud on seasonal return and maintained her winning streak with a decisive success as the 7-4 favourite in a stellar edition of Thursday's G1 Darley Yorkshire Oaks on the Knavesmire, a “Win And You're In” for the GI Breeders' Cup Filly & Mare Turf in November. Successful in the G1 Grosser Preis von Berlin, G1 Preis von Europa and G1 Grosser Preis von Bayern last year, she became Sir Mark Prescott's first domestic Group 1 winner since Marsha (Ire) (Acclamation {GB}) annexed 2017's G1 Nunthorpe S. at this meeting. The grey's second dam Albanova (GB) (Alzao) rattled off the same trio of German Group 1 triumphs in 2004 and she embellished her record with a fifth straight elite-level triumph in the 12-furlong test. Trainer Sir Mark Prescott had voiced pace concerns beforehand, going so far as to say she may have to make her own running, but his worries were assuaged as G1 Pretty Polly S. victrix La Petite Coco (Ire) (Ruler Of The World {Ire}) and G1 Irish Oaks heroine Magical Lagoon (Ire) (Galileo {Ire}) disputed a solid tempo up front with Alpinista positioned in behind in a stalking third. Urged closer once into the long home straight, she went to the front approaching the quarter-mile marker and was driven out in the closing stages as Epsom's G1 Oaks winner Tuesday (Ire) (Galileo {Ire}) gave vain chase. At the line, Alpinista held a one-length advantage with La Petite Coco staying on well once headed to finish 1 3/4 lengths further adrift in third.

“They are all great, but Group 1 races are hard to come by and, for a smallish stable, every five or six years you get good ones come along and it's tremendous when it happens,” said Prescott. “We trained this one's dam, granddam and great granddam. It's been a marvellous family. The original intention was to go [G1] Coronation Cup and [G1] King George [VI & Queen Elizabeth S.], but she wouldn't come in her coat in time for the Coronation, so it then became Saint-Cloud and then either here or the [G1 Prix] Vermeille. Miss Rausing was very keen to come here as she hadn't won a Group 1 in England. She has really done it all now, she's won Group 1s in England, France and Germany.”

Looking ahead, the veteran Heath House conditioner added, “The [G1 Prix de l'] Arc [de Triomphe] has always been her aim. Last year we rather patted ourselves on the back for being so clever winning three Group 1s in Germany, then, when the one behind us [Torquator Tasso] came and won the Arc, we rather felt we might not have been as clever as we thought we were. When she stayed in training this year that was always the aim.”

Winning jockey Luke Morris is also relishing the prospect of going to ParisLongchamp on the first Sunday in October. “Since she has been on better ground this year she has looked like a filly with more class so we can dream about Paris now,” he said. “Generally the Yorkshire Oaks can look a little top heavy with a superstar of Aidan's, but I thought it had a lot of depth and she had to give nine pounds away to the second. I thought it was a great performance and it's great she's been able to show in Britain what she is capable of. It's a massive effort from the teams at Heath House and Lanwades Stud. I'm just the lucky one that gets to sit on her a couple of times a year.”

Aidan O'Brien was not too downcast, despite Tuesday's defeat, and looked ahead to future targets after the G1 Oaks heroine failed to reel in the winner. “She will go on Irish Champions weekend somewhere, whether she will stay here [in England], or whether she will go to Ireland or whether she will go to France or whatever. Hopefully she will go somewhere. We were happy enough with that. It was her first run back, she ran very well and I don't think she was losing any ground going to the line. She has come back to form after [finishing fourth in the G1 Irish Derby at] the Curragh. She was a bit hot before the race, but I didn't mind that as I was hot myself. She is in the mix for the Arc and other races.”

Team Valor's La Petite Coco would have preferred more juice in the ground, but nonetheless produced a display of star quality in third. “She is not the type to set the pace, but nobody else wanted to so that was somewhat less than ideal,” admitted Barry Irwin. “I think the difference between her finishing right there with the first two and where she did finish was somewhat quality, because they are two fantastic horses for sure, but our filly needs the soft. The ground had a good cover on top, but underneath it was firm and she can't lay her body down like that. On soft turf, not that the others would not have run as well, I think we would have been able to hang with them better if the ground was softer. The fact that the race turned into something of a sprint, and that she wasn't going to let herself down as well, played against her somewhat.” It's unlikely connections will be tempted into a rematch with Alpinista in Paris. “Paddy [Twomey] is talking about the [G1] Prix de l'Opera or the [G1] Champion S. [at Ascot]. That is what he is looking at, we need to wait for the ground to soften and we are going to forget about the Arc this year. When she won at the Curragh it was like a miracle, where it rained just before the race and she got her ground. Even though she wasn't really totally fit, she was able to win anyway because of the ground.”