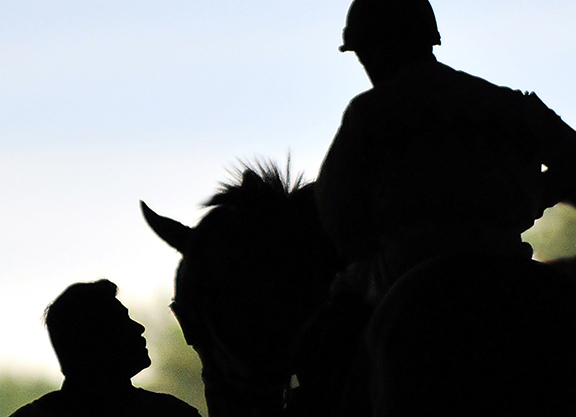 When Kelly Ryan, primary care sports medicine physician for Medstar Health and co-medical director for the Maryland Horsemen's Health Program, discusses with her peers in the sports medicine world her work attending to injured jockeys, she's often met with the sort of wide-eyed puzzlement usually reserved for rare finds.

“Every single bad case that we have is almost one in a million–like no other sports medicine doctor has ever seen this type of injury before,” Ryan said. “They're all very unique and every single one of them could be a case study because of the level of trauma that they endure.”

This probably doesn't qualify as revelatory for those within the sport accustomed to the sort of bone-crushing acts of stunt riding seen weekly on the track.

But what the industry should be chafing against is the hitherto dearth of hard data that might help explain how and why these accidents happen, especially when compared to efforts within many other sports–those far less dangerous than racing–to understand the cause and effect of injury to athlete.

Which is why Ryan hopes that a four-year study she helmed into jockey injuries in Maryland–one published last month–will help to plug that gap.

“The important thing about injury data is if we can find patterns, then we can hopefully try to prevent further injuries, make some modifications,” Ryan said.

Between September of 2015 and May of last year, Ryan and her colleagues logged all injuries–falls and otherwise–that 670 participating riders sustained when riding at Laurel Park, Pimlico and Timonium.

An “incident” is defined as this: “An event that occurred involving the jockey that required enough of a concern or risk of resultant injury that the rider needed an evaluation and injury report to be completed by the racetrack physician.”

In a nutshell, the study can be boiled down to a number of key details. In all, 76.3% of falls and 79.3% of incidents resulted in an injury of some degree.

When it comes to injury type, the vast majority–nearly 80%–were soft tissue related. Hematomas, contusions and bruises were the most common, followed by strains and sprains, then fractures, abrasions and finally lacerations.

Over a quarter of incidents resulting in injury required further medical care in a hospital or another medical facility. In 2.5% of injuries, the jockeys required surgery.

Looking at the study findings, what are Ryan's main recommendations to improve the overall quality of care given to stricken riders? She has three of them, including how each racetrack needs to have a set of clear concussion protocols in place.

Out of the 22 head injuries that jockeys suffered during the four-year study, eight were concussions, which works out to 0.18 concussions per 1,000 mounts. Six of the concussions came from a fall and two from horse headbutts.

Another of Ryan's recommendations is for racetracks to “implement” sports medicine professionals into their operations, as is the case in Maryland.

“A lot of the other racetracks in the U.S., some of them don't even have any medical providers, let alone a sports medicine-trained physician,” she said, pointing out how tracks are now typically awash with veterinarians, “but there's really not much for the people.”

And finally, “make sure to improve emergency action protocols and make sure jockeys get the level of care that they need immediately,” Ryan said. Not only that, ensure that these protocols “are prepared, practiced and streamlined in the case of an actual emergency,” she added.

How likely is an emergency? Twenty jockeys were taken immediately to a hospital by ambulance during the four-year study, while 21 injured riders were transferred to another facility for evaluation at an orthopaedic clinic, urgent care centre or imaging centre.

Of the nine surgeries performed on injured riders, two were cases of internal bleeding from a lacerated spleen (one that had complications missed on initial evaluation). Other surgical cases included a fractured fibula, along with two shoulder and two hand injuries.

The unusual catalogue of injuries that jockeys often suffer makes it imperative they receive specialized attention from an expert who understands the long-term stresses that injury will be put under–something that happens too infrequently, Ryan explained.

“You want a hand specialist for their hand–you don't want a general orthopaedic surgeon. If you tear your ACL, you want not just a regular general orthopaedic, you want them to go to see someone who does 300 ACLs a year,” she said. “[Jockeys are] professional athletes–their career depends on it.”

One fascinating feature of the study is how it breaks down injury occurrence to location on the track, with slightly more than 14% of injuries unfolding on the homestretch, 8.2% happening immediately post-finish and 6.8% near the finish line.

The most dangerous area by far, however, is the starting gate. Roughly 41% of all injuries occurred either entering or leaving the gate, or else in the contraption itself.

As such, this is another opportunity for the industry to take stock and examine the whys and wherefores of injury occurrence around the starting gate. “Can we improve the process by better training the horses, the assistant starters and the jockeys?” she said, pointing out that questions need to be asked of whether the gates themselves are contributing to the problem, and whether starting stalls used in other countries could benefit U.S. shores.

Which brings the conversation neatly back to the issues of piecemeal jockey injury data collection, and a glaring opportunity for the industry to implement safety changes built on hard fact rather than supposition.