Jockey Health and Safety: Necessary Advances Benefit All of Industry 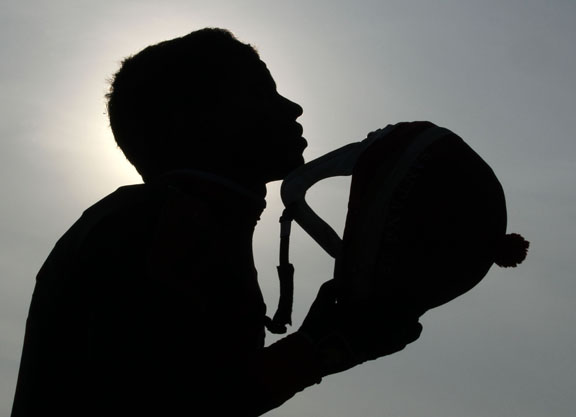 Before new student athletes at the University of Kentucky (UK) embark upon their collegiate sporting careers, they undergo a 2 1/2-hour battery of physical tests to determine a variety of factors, like the alacrity of their neuromotor and neurocognitive functions, their aerobic efficiency and their musculoskeletal health.

The data generated from these tests can be used as a reference should one of these athletes get injured, as well as to help design protocols to reduce the likelihood of injury in the first place, said Scott Lephart, dean of UK's College of Health Sciences.

“If we can get a good, accurate, epidemiological history or documentation of events after we have these baseline measurements, it will really allow us to look at injury mitigation in a scientific way,” he said. “And that's really what we've done with other sports.”

The problem for horse racing, said Lephart, is this: “these other sports are so far ahead of what's going on in the Thoroughbred industry as it relates to the human health component of it.”

Lephart's observation is hardly revelatory. Indeed, in a recently published paper, the authors spelled out in the very first sentence how North American flat racing “lacks comprehensive collection, collation, and analysis of jockey fall and injury data”–the sort of rigorous scientific approach which could be used to identify and then implement measures to make the sport safer for jockeys. And why is this necessary?

Two jockeys on average die every year on U.S. racetracks as a result of injuries sustained race-riding. On top of that, 60% of jockey falls during a race will result in a “substantive” injury, said Peta Hitchens, a research fellow in the Equine Orthopaedic Research Group at the University of Melbourne.

Nevertheless, in this regard the sport appears to be making headway. “The University of Kentucky could be a world leader in jockey and rider safety,” said Jockeys' Guild national manager, Terry Meyocks, pointing to a new UK program studying the physical and mental impacts from race-riding–just one of a number of interesting developments in the arena of jockey health. But substantive change comes with a caveat, Meyocks warned.

“Whether it's a racing official or management or someone else, our industry doesn't work well together,” said Meyocks, “and I think now's the time our industry has to work together if it's to survive.”

What does the data say?

Though the existing data surrounding jockey risk factors and safety is noticeably threadbare, the literature that does exist offers a useful platform from which to build.

“The most common reason for falls and injuries by jockeys, and especially for the most severe injuries, was riding a horse that had broken down,” said Hitchens, pointing to this paper using data out of California over a six-year period. During that time, 707 horses were fatally injured.

Data is only useful, of course, if it has some practical application. “So, what we can do to try and prevent the worst of the jockey injuries, and prevent a lot of the fatalities as well, is to directly address the problem of racehorse breakdowns,” said Hitchens. But catastrophic equine injuries aren't the only predicating factor, it appears, when it comes to jockey falls.

“Another major risk is placing inexperienced jockeys on inexperienced and less accomplished horses,” Hitchens said. Indeed, Hitchens and her co-authors delved into seven years of Australian data and uncovered a range of factors that predisposed apprentice jockeys to a higher likelihood of falling, including apprentices who started their careers at an older age, and those that had fewer rides at a certain meet.

The findings get even more granular. In this paper, the authors found a link between a higher prevalence of falls with drier turf tracks, younger horses, shorter races, smaller field sizes, as well as cheaper races.

This small pilot study looked at what physiological factors in jockeys and exercise riders might determine likelihood of falling. It found a higher prevalence of falls among riders with lower aerobic and anaerobic fitness, and among those who rode with their full foot in the stirrup irons as opposed to the ball of the foot. Interestingly, riders with greater muscular strength were more apt to fall. “That's likely because the stronger trackwork riders were being put on the most difficult horses,” Hitchens explained.

Hitchens also raised an interesting distinction between Australia and North America. Stateside, horses are, of course, typically ponied to the gate. Not so among our Antipodean cousins. “In Australia, 50% of our falls occurred pre or post-race, and most of our pre-race falls were tumbles on the way to the [gates] due to the horses' fractious behavior,” said Hitchens.

So, just what kind of data collection and jockey health programs currently exist in North America? The primary ones are the Jockey Injury Database (JID), and the Jockey Health Injury System (JHIS), though both are far from being well-oiled machines.

The JID is a procedure to record the details of jockey accidents at individual racetracks, including the where, when and how of the fall, the type of equipment riders wore, along with any pertinent details about the injury. Regional managers of the Jockeys' Guild along with track management are the ones typically charged with recording the information into the system, some of which is redacted to comply with Health Insurance Portability and Accountability Act (HIPAA) laws.

According to Meyocks, Keeneland “and a few other racetracks” take pains to input the data. Nevertheless, “it's very hit and miss,” he warned, about the consistency overall. “The Guild's regional managers are doing it more than the racetracks,” he added.

Launched in 2008, the JHIS is a centralized database for inputting jockey's medical and health history. In an ideal world, medical personnel would have access to the database in the event of an accident or injury. According to Kelly Ryan, a sports physician and a member of the Maryland Horsemen's Health System, the JHIS is very “regional dependent,” and requires jockeys or their representatives–individuals with typically limited medical experience–to input the information themselves, making compliance patchy.

What can be done?

Some corners of the industry have stepped into the breach. The MedStar Sports Medicine's Center for Horsemen's Health is a centralized system already operating in Maryland. “Because Maryland racetracks contract us out, essentially jockeys are on our team–we have profiles of them on our electronic medical records system,” Ryan said, boiling the bare bones of the system down to the following:

If a jockey in Maryland takes a fall or is injured in any way, an on-track sports physician (i.e. Ryan) will conduct a medical assessment and record the details so they're available to other medical experts within the system, which leads to the proposed MedStar Telehealth Clinic, Ryan's brainchild.

When it comes to the impacts from any head injury, awareness continues to grow around concussions, and their possible relationship to Chronic Traumatic Encephalopathy (CTE)–a disease caused by repeated head trauma. Symptoms include memory loss, confusion, depression, parkinsonism, and, in the worst-case scenarios, progressive dementia. Indeed, the National Thoroughbred Racing Association's (NTRA) Code of Standards was recently updated with concussion guidelines.

In the U.S., 8.6% of jockey falls result in concussion, according to data from between 2012 and 2015. An earlier study determined that nearly 20% of race-day injuries were to the head and neck. But the possible misdiagnosis of concussion means that these figures could be on the conservative side, say experts.

For those tracks unable to afford an on-site sports physician, the medical technicians who attend riders who have suffered a head injury are typically untrained in diagnosing concussions. If that medical technician was connected to the MedStar Telehealth Clinic, however, they could then contact, via a telecommunication like Skype, a sports physician who could evaluate the rider remotely.

“We would then be able to say, 'this exam is completely normal, I have low suspicions for a concussion,'” said Ryan, about a system that would cost around $150,000 to kick-start, much of the outlay required to develop specialized software. “Or, we would say, 'this patient is exhibiting symptoms of a concussion, and needs to be removed from riding and needs to follow up.'”

There's movement elsewhere in the industry. The Jockey and Equestrian Initiative (JEI) through the University of Kentucky's Sports Medicine Research Institute is a program studying the effects that race-riding has on the body and mind over time. “We really don't know what the effects from doing this for 10, 20, 30 years are on these guys,” explained Lephart, who runs the program.

Jockeys participating in the JEI, said Lephart, are put through a series of specially engineered tests in order to determine a broad variety of things–like their overall physical fitness and prowess–in order to create their injury and risk assessment profiles. But researchers also have more focused areas of interest, including the role that depression and cognitive impairment has on jockey health and performance, factors related to concussions and loss of self-identity, as well as dietary health. “Some of their weight management practices are less than ideal,” said Lephart.

The first set of jockeys (about eight in all) riding at Keeneland in the spring set the ball rolling. When racing resumes at Keeneland this fall, “we hope to get the majority of the jockeys in during the six weeks they're in Lexington,” Lephart said. “It allows us to start tracking them,” he added, “tracking their injury rates, very specifically, and also have the opportunity to have them come back in when they come to Lexington to do serial testing.”

There are other residual benefits to tightening the safety screws in terms of the dollars and cents saved in workers' compensation and other health care claims. “Every time a jockey comes in to see me, that's money the racetrack has saved in paying out other exorbitant costs,” said Ryan, about Maryland.

Meyocks agrees that financial gains across the industry derived from fewer jockey injuries can't be over-stated. “We all should be concerned about the well-being of the horse,” he said. “But how many owners and trainers have gone out of business because of workers' comp?”

The Guild, said Meyocks, is developing an app with a variety of functions, all built around streamlining communication among members. In the meantime, the JID and JHIS should be used to their full potential, said Meyocks–indeed, he believes compliance with the JID should be made mandatory for a racetrack to gain accreditation with the NTRA's Safety and Integrity Alliance.

Nevertheless, Steve Koch, Safety and Integrity Alliance executive director, argues that important structural changes must be made to the programs first if they're to provide the kinds of information necessary for meaningful change. “The JID and the JHIS have been valuable,” said Koch, who co-authored the recently published paper. “Now, what does the next chapter look like? We're evolving as an industry.”