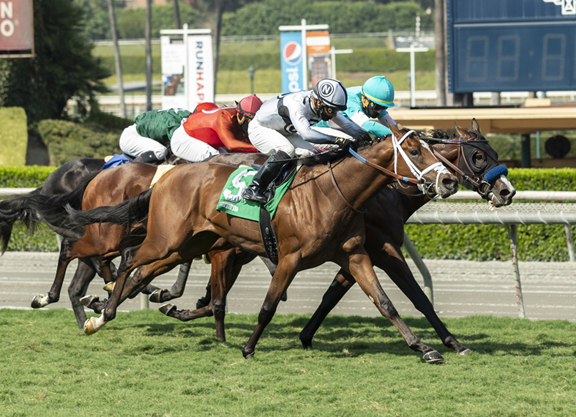 Ebeko, who was second in the Del Mar Juvenile Turf in his Stateside debut Sept. 7, went one better and came out on top of a tight one to become the first black-type winner for his Derrinstown Stud-based freshman sire (by Cape Cross {Ire}). A third-up winner for trainer Paddy Twomey at Leopardstown July 16, the bay was acquired privately thereafter and brought to Del Mar, where he showed a completely different running style than he had in Europe to rally from last. Showing a bit more early zip this time to sit perched in third, the bay mounted a four-wide rally into the lane and was one of five who appeared in with a chance at that point. The top three emerged from the pack late, and Ebeko made the last and winning move get up in the final jump.

“We've been on an incredible run,” said trainer Peter Miller, whose wins on Saturday included an impressive victory with Mo Forza (Uncle Mo) in the GII City of Hope Mile. “We've won with our last four, just everything is falling into place right now. I thought Ricky [Gonzalez] rode an incredible race. We knew this horse was doing well and Ricky saw that the pace was pretty slow, so he had him closer today.

Miller added, “To be honest, there's no doubt in my mind that he could've won much easier today if we didn't have the new [whip] rules… I'm just being honest… We're definitely going to look at the [Nov. 6 GI] Breeders' Cup [Juvenile Turf] with this horse. He deserves it and we're looking forward to going.”

The winner is out of a half-sister to French Group 2 winner Canticum (GB) (Cacique {Ire}) and hails from the female family of highest-level winners Distant Music, African Rose and Vanlandingham. He has a yearling half-brother by Gleneagles (Ire). Awtaad took the 2016 G1 Irish 2000 Guineas for Shadwell.