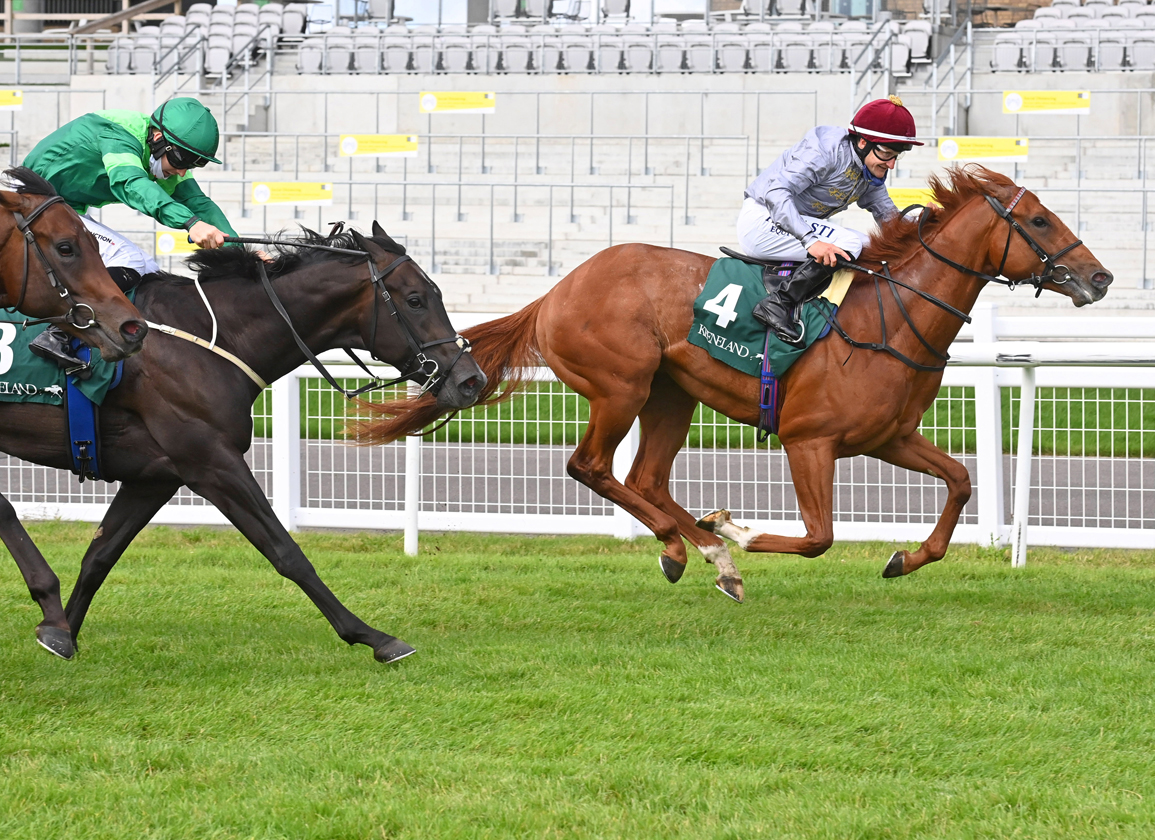 On the premises but off the board in a trio of group 2s in his native Britain, Al Shaqab Racing's Ebro River (Ire) (Galileo Gold {GB}) benefitted from a change in tactics to make virtually all in Sunday's G1 Keeneland Phoenix S. at The Curragh. In front before racing a furlong, the Hugo Palmer-trained 12-1 shot had the stand's rail to help and gave generously for Shane Foley as TDN Rising Star Dr Zempf (GB) (Dark Angel {Ire}) joined battle approaching the furlong pole. As that rival and the G2 Railway S. first and second Go Bears Go (Ire) (Kodi Bear {Ire}) and Castle Star (Ire) (Starspangledbanner {Aus}) made it four across the track there, it was the British raider who gave most to see off Dr Zempf by 3/4 of a length with the 6-4 favourite Go Bears Go a head behind in third. Foley, who was in Saratoga on Saturday and returned to home soil in the morning, said, “Hugo fancied the horse. He's tough and genuine and I just said I wouldn't mind changing tactics, as they had been dropping him in. It looked like there wasn't much pace today and with that tailwind it's hard to get them back.”

Impressive when the 3 1/4-length winner of the Listed National S. over five furlongs at Sandown May 27, Ebro River was a creditable fifth in the G2 Coventry S. at Royal Ascot June 15 before finishing fourth in the G2 July S. at Newmarket July 8. Again in that position in a slowly-run renewal of the G2 Richmond S. at Goodwood July 29, the chestnut enjoyed being allowed to bowl along and as his sire had done in the 2016 G1 2000 Guineas got the rail and refused to relinquish. “He jumped and probably travelled too strongly if anything–we went end-to-end but I had a willing partner,” Foley said. “He had a good run in the Coventry, but had been keen and awkward and doing things wrong. It was an ideal day to make it, as we had the draw and it's all come together. I thought he'd be vulnerable, as he'd travelled so strong in my hands for the first three and I thought they might swallow him but he dug in and I was comfortable in the last 100 yards. I think he's a horse with a lot of talent and the softer the ground the better you'll see of him. He felt like he would get seven furlongs no problem if he learns to relax. He was a lot better today and I felt that even if they went another half a furlong he'd still be in front.”

Ebro River has a chance of emulating the last two years' Phoenix winners Siskin (First Defence) and Lucky Vega (Ire) (Lope de Vega {Ire}) in getting a mile next year, but his dam Soft Power (Ire) (Balmont) has mainly sprinters in her immediate family. She is kin to Key Rose (Ire) (Key of Luck), who was third in the Listed Flame of Tara S. in its former guise as a six-furlong contest and is a full-sister to the dam of the G1 Diamond Jubilee S. and G1 July Cup hero Slade Power (Ire) (Dutch Art {GB}). This is the dynasty of the GI King's Bishop S. hero The Big Beast (Yes It's True) and the GI Hollywood Derby hero Slew the Dragon (Seattle Slew). Soft Power's yearling filly is by Mehmas (Ire), while she also has a filly foal by Inns of Court (Ire).