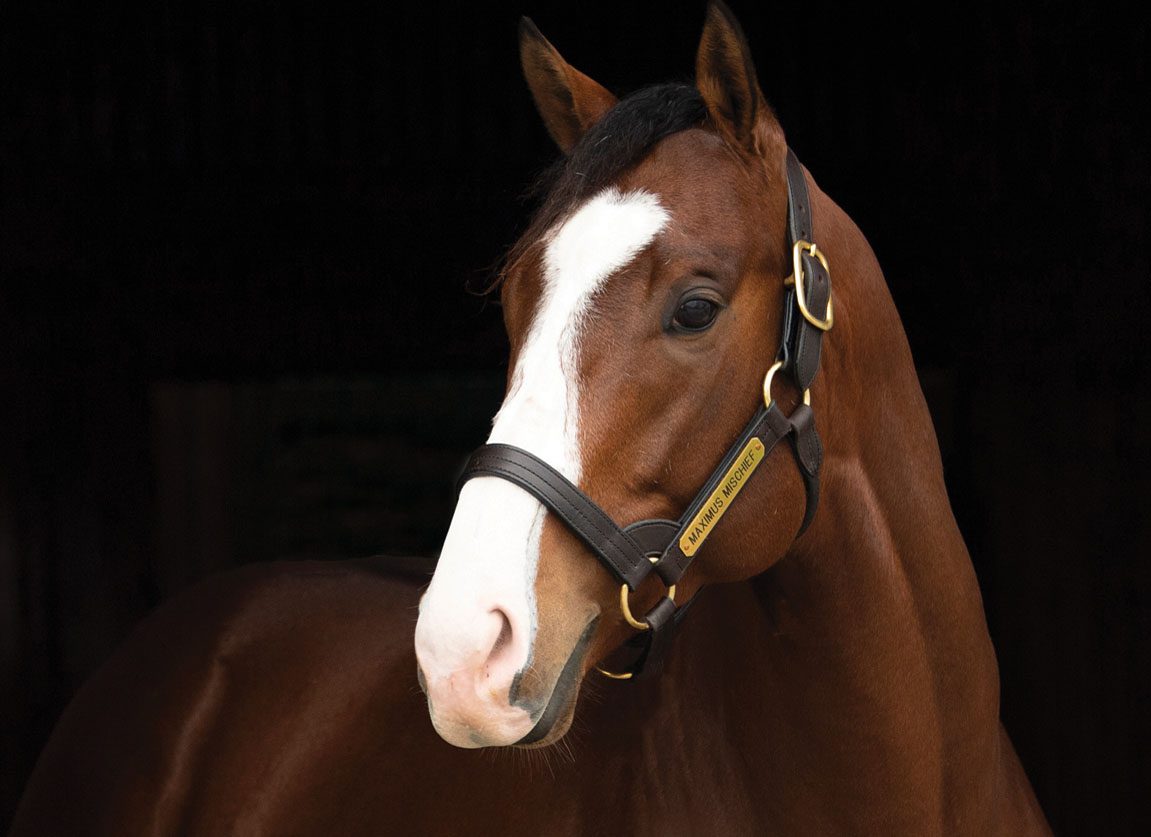 The 2022 class of first-crop yearling sires features a diverse batch of Kentucky-based young stallions, including a pair of Breeders' Cup champions, two sons of reigning top sire Into Mischief, five graded stakes winners at two and five Grade I winners on turf. Throughout the course of the yearling sales season, we will feature a series of freshman sires as their first crop points toward the sales ring. Check out the first few editions of our series here.

Buyers will have plenty of opportunity to get a good look at the first crop from Maximus Mischief (Into Mischief – Reina Maria, by Songandaprayer) at next week's Fasig-Tipton July Sale. With a dozen yearlings currently slated to go through the ring for Maximus Mischief, Spendthrift's Mark Toothaker said the young sire is generating quite the commercial buzz.

“I think he's going to have as much hype as any stallion out there,” he explained. “We knew there was a lot of excitement with this horse and we felt like, as the Fasig-Tipton team was doing their inspections, they were going to find a lot of these that they liked. He's a horse that gets the right type of physical. ”

While Maximus Mischief's major selling point for breeders has been the fact that he is by Into Mischief, this son of the remarkable leading stallion offers a different physical than most other sons of Into Mischief at stud. Toothaker said the speedy 'TDN Rising Star'-turned-Grade II winner has continued to fill out since settling in at Spendthrift and now, as a 6-year-old, stands at 17 hands.

“He is my biggest horse,” he said. “For him to win his first three starts, including the GII Remsen S., he was amazing with his speed for a horse that big. But to be an Into Mischief and be that big is even more amazing because normally that's something we don't see a lot. For him to be this massive, stretchy horse, breeders are loving it.”

Toothaker explained that as a unique representation of the Into Mischief line, Maximus Mischief is producing offspring with both the body and the leg that the commercial market demands.

“Breeders are putting something out there that the market wants. You get that great hip and really good Into Mischief body, but also with plenty of leg.”

With a $7,500 stud fee in his first three years at stud, Maximus Mischief has been held to an average of 180 mares each year. It's a book size that Toothaker said fits the stallion and what they hope to accomplish with him.

“I feel like we hit the bull's-eye with him because he's at a price that anybody can afford,” he noted. “It has caused a dilemma because we sell him out, which is a great problem to have, but it's exciting for breeders to be able to get a horse of his quality for that price. Who wouldn't want to breed to a son of Into Mischief?”

Out of a half-sister to Grade I winner Secret Compass (Discreet Compass) and campaigned by Cash is King LLC and LC Racing, Maximus Mischief romped in his first two starts as a juvenile at Parx, winning the first by almost nine lengths under wraps and the second in a similar style with a 98 Beyer Speed Figure. He remained undefeated in the GII Remsen S., but incurred an injury shortly after placing in the GII Holy Bull S. and was forced off the Kentucky Derby trail and eventually into retirement.

“We were pretty determined to land him here at Spendthrift,” Toothaker noted.”We were very fortunate that Chuck Zacney and Glenn Bennett were willing to do a deal with us to insure bringing him here. They've been very, very supportive of Max each year. They've sent mares to him and have been active at the sales buying some.”

At the fall and winter breeding stock sales, Maximus Mischief's progeny averaged $42,777 with 45 of 52 sold. At the Keeneland January Sale, his filly out of Sheza Sweet Lemon (Lemon Drop Kid) sold for $145,000 to Cash Is King and Commonwealth New Era Racing.

Bloodstock agent and pinhooker Renee Dailey said she went into the weanling sales with the goal of coming out with several Maximus Mischief pinhooking prospects.

“We had seen and heard about how their appearance was so much like the Into Mischiefs,” she recalled. “They were very athletic-looking foals that had great walks and strong shoulders and hips. When they were pulled out of the barn, you would not have known it wasn't an Into Mischief.” 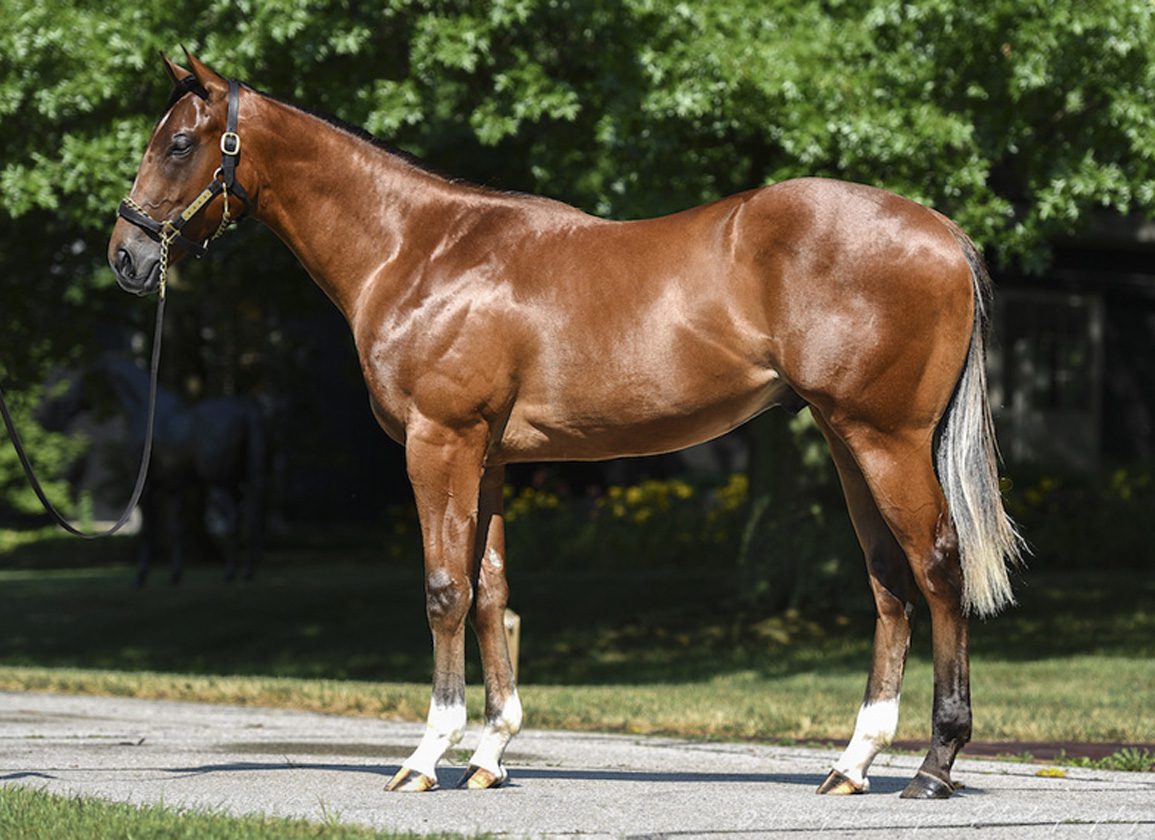 Dailey couldn't get her hands on a Maximus Mischief until late in the Keeneland November Sale, but found another prospect in January. Partnering with John Greathouse of Glencrest Farm, she signed the ticket on a colt out of Lucy Buckner (Stormy Atlantic), a full-sister to GISW Stormy Lucy, for $55,000.

“When John and I got him at that price, we looked at each other and high-fived,” she recounted. “We were thrilled. He is a very strong colt. He has a huge hip and shoulder. With Storm Cat on the bottom and Into Mischief on the top, he is bred to be fast and it's a similar cross to GISW Going to Vegas (Goldencents).”

The colt is now preparing to go through the ring as Hip 123 at the Fasig-Tipton July Sale with Four Star Sales.

“I'm just thrilled with how he has come along through sales prep,” Dailey said. “He's a forward, tenacious colt and an extremely athletic physical. I've had him since he was purchased and he just hasn't had a bad day.”

Toothaker said he believes that Maximus Mischief's sales prospects at Fasig-Tipton July will serve as a harbinger for more to come for their sire as the yearling auctions continue.

“Everyone you talk to is saying that they've got a good one,” he said. “They're going to be horses that people can buy right and give them a real chance at the track or back at the 2-year-old sales.”