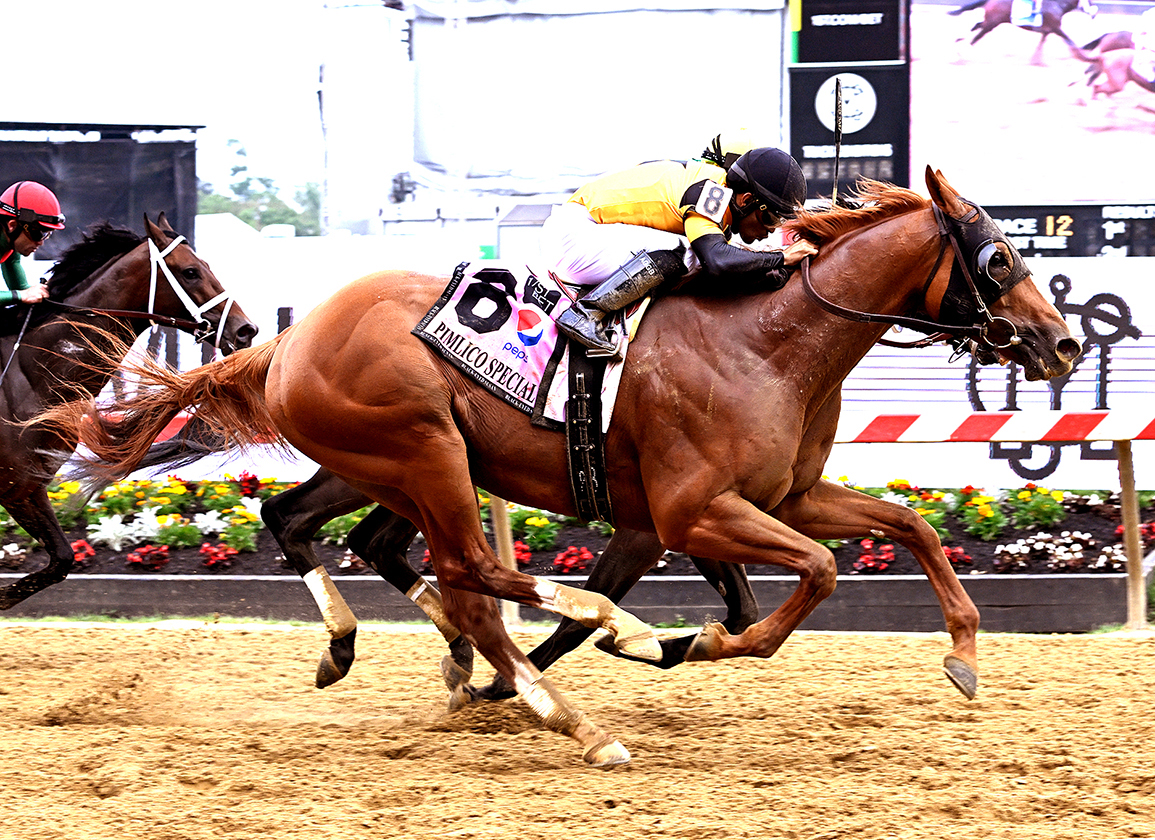 'TDN Rising Star' First Captain (Curlin) looked to have it all to do with a quarter-mile to go in Friday's GIII Pimlico Special S., but he called on his class in the final 50 yards to snatch victory from the jaws of defeat.

Adding blinkers for the first time off a disappointing seventh in the GI Carter H. Apr. 9, the $1.5-million joint-topper at the 2019 Fasig-Tipton Saratoga Sale was off alertly and settled in fifth position passing under the wire for the first time as recent Excelsior S. runner-up Untreated (Nyquist) led them along through a leisurely opening couple of furlongs in :24.99. Traveling comfortably enough down the backstretch, First Captain raced worse than midfield and was four off the inside and in the clear as the field entered the final half-mile, the pace still very much working against the back markers on a track that seemed to be carrying speed. The chestnut came under a Luis Saez ride with about three furlongs to run and looked to be one-paced at the top of the stretch, as Untreated was still enjoying a soft time of things up front. But, pulled out to the middle of the track, First Captain took aim on favored Vindictive (Uncle Mo)–who'd wrested command from his stablemate Untreated deep inside the final furlong–and fought on bravely to score by a short neck.

An impressive debut winner over seven furlongs last April, First Captain showed determination and poise well beyond his relative inexperience to add a first-level Belmont allowance en route to 'Rising Star' honors the following month. The chestnut made the GIII Dwyer S. his third win from as many appearances July 5, but he stubbed his toe when trying two turns for the first time in the restricted Curlin S. July 30 and was shelved. First Captain made a victorious comeback to the races in a seven-furlong test at Gulfstream Feb. 27, but was always outpaced in the Carter, finishing well down the field.

“I debated on the blinkers last year after the Curlin, but we didn't get that far,” said Hall of Fame trainer Shug McGaughey. “We trained him in them here [at Belmont Park] and we liked what we saw. I saw him gallop here the other morning before he shipped and my thought was, 'If he runs the way he gallops, he's going to be pretty tough.' Obviously, he did.

McGaughey continued, “He had trained well. The Carter was a puzzler. All his other races were good; he's won five out of seven now with a third in a listed stakes. We were anxious to get him around two turns.”

Bobby Flay, who was also represented Friday by Hilltop S. winner Pizza Bianca (Fastnet Rock {Aus}), gained access to First Captain's booming female family when acquiring second dam Lacadena privately after she was led out unsold on a bid of $1.4 million at the 2007 Fasig-Tipton November Sale.

The fact that Lacadena, stakes-placed at two for Jim and Alice Sapara, would prove to be so coveted, was no surprise, particularly in the aftermath of the 2007 racing season. The mare's dam, Butterfly Blue, was a half-sister to Better Than Honour (Deputy Minister), whose daughter Rags to Riches (A.P. Indy), defeated First Captain's sire in a stirring renewal of the GI Belmont S., giving an unusually demonstrative trainer Todd Pletcher a first Classic success.

For her second covering, and to no one's surprise, Flay sent Lacadena to A.P. Indy and the mare foaled a filly in March 2011. The celebrity chef elected to retain that produce when bidding stalled out on her at $725,000 at Keeneland September in 2012, and the decision proved shrewd, as America would go on to win five times from 22 starts, including the GIII Turnback the Alarm H., and was third in the GI Delaware H. before retiring to Flay's boutique broodmare band in 2016.

Flay elected to send America to Curlin for her first date in the breeding shed and he must have been pleased with the result, as she returned to the Hill 'n' Dale star for the 2018 breeding season. She foaled a filly in January 2019, eight months before First Captain took his spot in the Humphrey S. Finney Sales Pavilion at Fasig-Tipton Saratoga, where he and a Curlin colt out of Wapi (Chi) (Scat Daddy) shared top honors when hammering for $1.5 million.

The family was given yet another advertisement in the summer of 2020, when Paris Lights (Curlin), a daughter of America's half-sister Paris Bikini (Bernardini), took out the GI Coaching Club American Oaks at Saratoga. Flay sold Lacadena to Heider Family Stables in foal to Bernardini for $1.3 million at Keeneland November in 2015, while Paris Bikini was hammered down to Katsumi Yoshida for $1.95 million in foal to Uncle Mo at Fasig-Tipton November in 2020.

America visited Uncle Mo in the winter of 2019 and was offered by Flay at that year's Fasig-Tipton November Sale. She was ultimately retained on a bid of $3.1 million. The resulting produce, a colt, was a $550,000 RNA at Keeneland September last fall, while America is responsible for a yearling full-sister to First Captain and a colt by Uncle Mo foaled Mar. 19. She was bred to Curlin again this season.