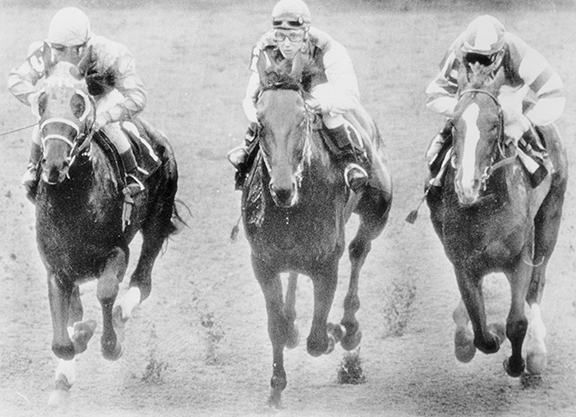 She knew her horse didn't have a chance in the 1970 Kentucky Derby and so did everyone else, but, still, Diane Crump couldn't avoid the spotlight as the race approached. At least she was used to it. Fifteen months earlier, Crump became the first female to ride in a pari-mutuel race. Now, she was set to make history again, as the first female to ride in the Kentucky Derby.

“That whole week, the whole atmosphere, it was just amazing,” said Crump. “If this is the sport you love, nothing beats that. I am eternally grateful that I got to participate. The only thing it lacked is that my horse wasn't a serious contender.”

Crump is now 71, based in Northern Virginia and buys and sells sport horses. Though she only won 235 races in her career, her impact on the sport is unmistakable. There were other female riders who attempted to become jockeys before she did, but they were never able to get past the threats from male jockeys that they would boycott any race in which a women was cleared to ride. When Crump got clearance to ride a horse named Bridle 'n Bit in a Feb. 7, 1969, race at Hialeah, six males jockeys took off their mounts. That a female was riding in a horse race was such an oddity that she was mobbed by reporters from newspapers and television stations and photographers. The horse finished 10th, but Crump received a positive review in the New York Times, which noted, “Even the most bitter opponents of girl riders had to admit she looked good on Bridle 'n Bit.”

“For me, the most exciting thing that happened to me was getting to ride,” Crump says today. “It was such a battle.”

It was never easy for Crump, who said she rarely got to ride a horse that had a chance, but she did have at least one benefactor. W. L. Lyons Brown, whose family owned the Brown-Forman distillery, took a liking to her and began putting her aboard many of his horses. Not only did he support Crump, but he turned over many of his horses to her husband, the trainer Don Divine

“Mr. Brown gave me such an opportunity,” she said. “He rode me on every single horse he owned. I never would have had the opportunities I did without him. He thought I was a great rider and I had that in my favor.”

On paper, Fathom didn't belong in the Derby, but Crump said that Brown, a Louisville native, had always wanted to start a horse in the race. Crump had Brown on her side, she was married to the trainer and she had ridden Fathom in all but his first career start, so there was little debate as to who would get the mount for the Derby.

By Derby Day, May 2, 1970, the sport had moved on and was, at the very least, reluctantly accepting the fact that female jockeys were there to stay.

“A lot of the harassment and most of the issues occurred before I ever got to ride,” Crump said. “The first two or three months were the worst. At the Derby, it was a little over a year since I started and by then, things had calmed down. I was fairly well received in Kentucky, more so than in other states. There was less dissension. After the first several months it died down so far as the male jockeys went. It wasn't perfect, but it definitely improved.”

Yet, Crump was still a major story leading up to the race. The Times' coverage of the day included a feature story on Crump, and the reporter ventured into the crowd to hear from the fans.

“I just won't bet on her,” Willow Abraham told the Times. “It's just not right…Women have no business being on a race horse” Jeff Lehman told the paper that Crump's presence “took a lot of tradition out of the Derby.”

Given the rare chance to ride a contender, Crump won the first race on the card on a horse that paid $8. It was her 34th career winner. She finished fourth on her next mount and then retreated to her quarters. Not wanting to be a distraction or take anything away from the winner of the Derby, she let it be known that she would not speak to reporters afterward unless she finished in the top five.

Fathom never had a chance. He finished 15th in a 17-horse field.

“I loved the horse,” Crump said. “He just wasn't a mile-and-a-quarter horse or of that caliber.”

It would be Crump's one and only ride in the Derby. For most of her career, she still had to deal with the stigma of being a female jockey, which, she says, kept her from ever getting a fair chance to ride quality horses.

“I think I was a very good rider,” she said. “I won races I never should have won. I think I rode a good race and I had the potential to be a really good rider. I never got to show it because I was never put on a top horse. I won races on horses that paid $100, horses that were 99-1. I beat top riders coming down to the wire. You need to ride a certain amount of horses to get proficient at it. It took longer for me because of how few horses I got to ride. That my biggest disappointment.”

Crump retired in 1986 and then made a comeback. She rode from 1992 to 1997 and also trained from 1990 through 1998. She wishes she could have ridden and trained more winners than she did, but is proud of the role she played in the history of the sport.

“I am happy that I got to pave the way,” she said. “My footprint is in that first little wet pavement. I'm grateful for that and for whatever I was able to lend to the sport.”

After Crump and others broke down the doors, riders like Julie Krone and Rosie Naprvanik proved that a female could compete with the very best. But 50 years later, a female jockey still has not won the Kentucky Derby and only six have ridden in the race, and none since the now-retired Napravnik in 2014.

“Even 20 years ago, there were more women trying,” Crump said. “I am a little disappointed with what has happened. But if somebody loves riding and wants to do it they have that opportunity. There is nothing stopping them, that part I am happy with. Hopefully, it will change. In other equine sports, women do awesome. At Rolex, there are some great women riders doing amazing things. It is surprising to me that women haven't been more prevalent in the racing world. For some reason, it has been slow in evolving.”

She had been planning on attending this year's Derby to celebrate the 50-year mark. Brown's family had invited her to come as their guest, and she had a book signing scheduled to promote her biography. She hopes to be able to attend in September as she is proud to be a part of the history of the race.