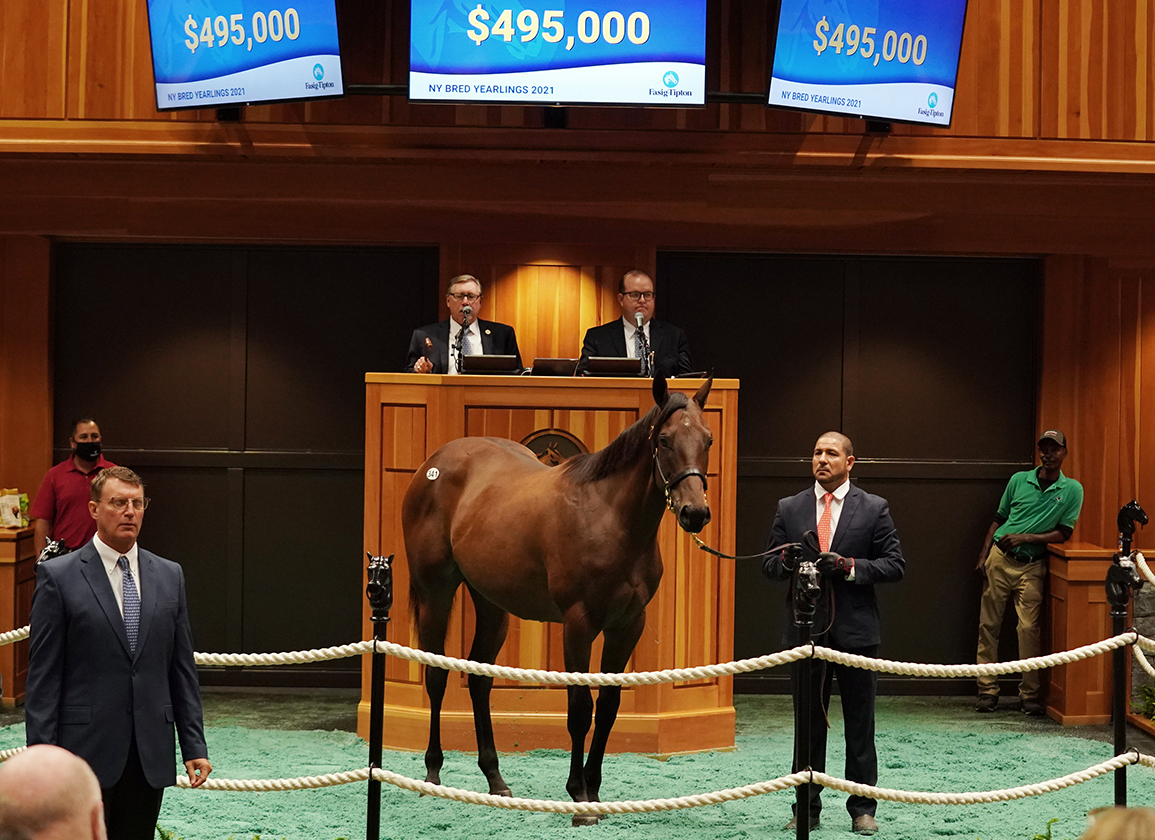 Session-topping Hip 341 in the ring | Fasig-Tipton

SARATOGA SPRINGS, NY–The Fasig-Tipton New York-Bred Yearlings Sale, which had a string of record-setting renewals interrupted only by its cancellation due to the COVID-19 pandemic last summer, got back on track with a strong opening session at the Humphrey S. Finney Pavilion Sunday evening.

“It was an outstanding opening night to the 2021 New York-bred sale,” said Fasig-Tipton President Boyd Browning. “I was thrilled to have the average over $100,000 tonight. It's one of those milestones that we are trying to achieve. Hopefully the strength will continue tomorrow.”

“As encouraging, or more encouraging, it was a very reasonable RNA rate tonight for the New York-bred sale,” Browning said. “In the past we've talked many times about the higher-than-average RNA rate because there are so many opportunities for the owners and breeders of these horses to race given the purse structure in the state. The RNA rate tonight was certainly at an acceptable level. The momentum and enthusiasm from the selected sale continued tonight with a really strong marketplace with a diverse group of buyers.”

Sunday's session was topped by a filly by Uncle Mo who was consigned by Tom Gallo on behalf of her co-breeders and was purchased by Gallo for his Dream Maker Racing partnership. The yearling was one of nine to bring over $200,000.

“The market is fabulous,” Gallo said. “I think this market is strong with people coming out of the pandemic with all of this pent-up enthusiasm and people who didn't get to spend their money last year. And this is a neat market because it's a middle market. It's a meat-and-potatoes market. People can come here and buy a decent horse for $50,000, $70,000 or $100,000 or $150,000 and, with the purses the way they are, if you get just a consistent horse that places a couple of times, wins, places again, you're already up to $120,000 or $150,000 in earnings. You may not break even for everything, but at least you have cash flow coming back.”

Tom Gallo was so impressed by a filly by Uncle Mo (hip 341) he was consigning for her co-breeders that he purchased her for his Dream Maker Racing partnership for a session-topping $495,000 Sunday at Fasig-Tipton.

“Dream Maker Racing is a racing partnership that I manage,” Gallo explained. “It's a group of people who bred her. All of the offspring are bred by Mia Gallo, Mary Kopley, Michael Newton and Elizabeth Weese–they are the ones who own the mare. We just set a price and if she didn't bring the price, we were just going to race her ourselves. But we have to sell it from the breeding partnership to the racing partnership.”

Of the yearling, Gallo said, “We loved the filly. We absolutely loved her. I've loved her since the day she was born. She is a monster. From when she was young, she just had a mind of her own. We raise them as weanlings and then we ship them down to raise them in Kentucky. After she was weaned, if you went up to her and she didn't want to be nice, she would come at you with ears pinned as a baby. And that's rare. So I always liked that because you have to be like that. Sometimes you have to be like that to be competitive and win races.”

Dream Maker Racing also campaigned the yearling's half-sister Satisfy (Candy Ride {Arg}), who was second in the 2018 Iroquois S. Like that filly, hip 341 will be trained by Bill Mott.

“Bill Mott has trained the whole family and he will be training her–he just doesn't know it yet,” Gallo said. “But he's done well with the family. We had the granddam, and we bred and raced the mother and now we are racing her babies. And we even have one of her daughters who just had a foal. So now we are on the fourth generation. And Bill is a breeder's trainer. He trains for people that race daughters of daughters. He is such an intelligent guy and he remembers the traits of the family. So it gives you a little bit of a jump start on the horse.”

Lane's End's David Ingordo has made no secret of how much he has been impressed by offspring of the farm's first-crop sire Accelerate, and the bloodstock agent acquired another yearling by the GI Breeders' Cup Classic winner when going to $335,000 late in Sunday's first session of the Fasig-Tipton New York-Bred Yearlings Sale.

“I was staying true to my TDN article where I said we would be trying to buy Accelerates,” Ingordo said with a smile after signing the ticket on hip 385. “We bought a beautiful colt in July and I saw this filly and she has got everything you'd want to have. I love her female family. She has the New York-bred to fall back on if we need it, but she looks like an open company horse. She is an excellent representation of what Accelerate is producing.”

The filly, who will be trained in California with John Sadler, is out of Delay of Game (Bernardini). The mare's half-sister is the dam of graded stakes winner Stanford (Malibu Moon) and multiple grade-placed Hedge Fund (Super Saver).

“They are like himself, really balanced individuals with a ton of class,” Ingordo said of what he is seeing in Accelerate's first crop of yearlings. “This filly oozed class. She's been by the ring all night and didn't turn a hair and came up here really well. Accelerate himself is a beautifully-balanced horse and this filly is just like him. She is out of a Bernardini mare. I couldn't get much more.”

Of the yearling's final price, Ingordo said, “She is a good horse and she costs what a good horse costs. She was expensive, but we loved her.”

The bay filly, consigned by St George Sales, was another success out of Delay of Game for Dan Hayden's EKQ Stables. Hayden purchased Delay of Game in foal to Street Sense for $90,000 at the 2017 Keeneland November sale. Her Street Sense filly sold for $260,000 at the 2019 Keeneland September sale and her Classic Empire colt sold for $310,000 at last year's Fasig-Tipton October sale.

After watching his filly by Army Mule (hip 314) sell for $300,000 to Maverick Racing/Siena Farm Sunday night at Fasig-Tipton, Windylea Farm's Kip O'Neill dedicated the result to his late father and Windylea founder Philip O'Neill, who passed earlier this year. The yearling is out of Whispering Angel (Hard Spun), a mare the father-son team purchased for just $3,000 at the 2019 Keeneland January sale.

“This is for my dad,” O'Neill said. “He died in March. He and I bought that mare together. And when we bought her for $3,000, we looked at each other and said, 'What are we missing?' Obviously, we got lucky.”

The yearling was consigned by Francis and Barbara Vanlangendonck's Summerfield and while the team celebrated the successful sale in the back of the pavilion, Barbara Vanlangendonck explained with a broad smile, “He told me he had three horses and asked which one we wanted and we picked this one.”

“The mare is kind of our franchise mare,” O'Neill said of Whispering Angel. “She is a big, strapping Hard Spun mare and she was successful on the track. She only raced three times and she had some bone spurring, nothing major. So they decided to retire her and sell her. She had slipped a Kitten's Joy filly and that's probably how she slipped to us.”

Of the yearling, O'Neill said, “She's been very forward since she was born. She's been a beautiful filly. It took her a while for it to come together. It's a testament to our staff, they did a fabulous job getting her ready. We are thrilled with the connections that bought her. We wish them the best and we'll see where we go from there.”

Whispering Angel is currently in foal to Speightstown and has a full-brother to Wells Bayou by her side.

Windylea Farm has a broodmare band of 23 head.

Hip 314 was the first Windylea horse to go through the ring at the New York-bred sale.

“Two more tonight and two tomorrow,” O'Neill said of the rest of the yearlings scheduled to sell in Saratoga. “If we better this, I'd be some shocked. She was the queen.”

Into Mischief Colt to Breeze Easy

While he had been in town earlier in the week, Breeze Easy's Mike Hall did his bidding Sunday night on the phone, going to $300,000 to acquire a colt by Into Mischief (hip 330) from the Winter Quarter Farm consignment.

“[Breeze Easy advisor] Tom McGreevey picked this horse out,” Hall said shortly after Fasig-Tipton's Anna Seitz signed the ticket on his behalf. “He's a nice, big, stout colt and well balanced. We just thought he was a good buy. He's a big colt who looks like he can go two turns.”

The bay colt is out of multiple stakes winner and graded-placed Akilina (Langfuhr) and is a half-brother to Japanese Group 1-placed Rieno Tesoro (Speightstown) and graded winner Governor Malibu (Malibu Moon). He was bred by Richard Leahy's Oak Bluff Stables.

“He was a really nice colt,” Winter Quarter's Don Robinson said. “I actually thought he would do better. But I am perfectly happy with what he brought. The mare has been really good. The family has been fantastic for us. I am perfectly happy and a really smart guy bought him, Tom McGreevey. He never wavered.”