David Ingordo shares his memories on finding Accelerate at Keeneland September and talks on the champion's first crop of yearlings. | Lane's End

David Ingordo has undoubtedly inspected thousands of yearlings, many of whom went on to become Ingordo-purchased success stories, since he saw Accelerate (Lookin at Lucky) at the 2014 Keeneland September Sale. Nevertheless, the well-respected agent has a vivid memory of seeing Hip 1162 at the Bluewater Sales consignment, a May-foaled son of the stakes-placed Awesome Again mare Issues.

“When a horse first walks out, you get an impression–at least, that's what it is for me,” Ingordo said. “And he was an extremely well- balanced horse, plenty of substance to him. He caught my attention. He was a beautiful chestnut color and was really well prepared. When you see them, you project what they're going to turn into. What he looked like to me there is what I hoped he would grow up to be, which is this beautifully well-balanced older horse now.”

Aside from the quality physical Ingordo recognized in Accelerate as a yearling, there was one intangible trait, according to Ingordo, that made the son of Lookin at Lucky such a success on the track.

“The thing you can't see is his heart,” he explained. “We buy these horses and they're all balanced, they have the pedigrees, they're good walkers and they vet clean. You put them in training and put them in company and they move forward each week. But what you never know is when they get hooked in a race, how bad do they want it? And Accelerate, he wanted it badly every time.”

That competitive energy led the Hronis Racing colorbearer to 10 career victories, from an 8 3/4-length maiden score as a sophomore to a win two years later in the GI Breeders' Cup Classic. Between those bookend wins, the John Sadler trainee also brought home Grade I scores in the Santa Anita H., Gold Cup at Santa Anita S., Pacific Classic S. and Awesome Again S. during his championship 5-year-old season.

“The thing I remember about Accelerate's 5-year-old campaign was just how dominant he was,” Ingordo said. “When John led him over [in the Breeders' Cup Classic], there wasn't any doubt we were going to run well. But the way he did it, he drew outside and delivered with a powerful performance.” 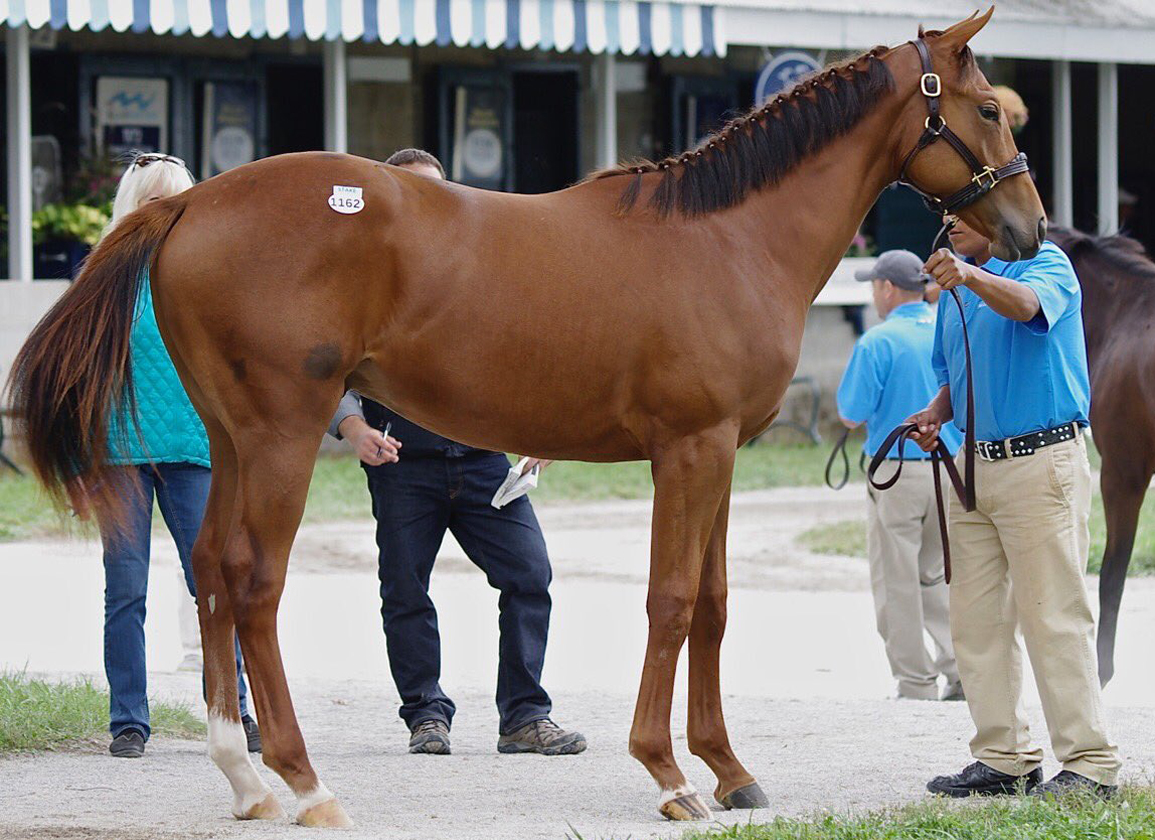 Ingordo has been busy visiting Accelerate's first crop of foals slated for the approaching yearling sales.

“When I go around looking at the offspring of a stallion, I expect to see the stallion in that foal,” he said. “So a lot of times before I go out looking at a crop of horses, I like to go see the stallion. So I'll come look at Accelerate and refresh myself about what I like about the horse. He's exceptionally well balanced, he's got a great shoulder, is very powerful behind, wide across his hips and has great bone.”

“They look like miniature versions of him. He's kind of throwing back to the Smart Strike part of his pedigree, which I think is an important element of what made Accelerate so good and I think that's going to help his offspring as they get to the track,” he said.

Ingordo also said he finds Accelerate's presence and demeanor reflected in his progeny.

“Accelerate is very regal. He's all class. I've noticed that same trait in his offspring. You can't teach that; they either have it or they don't, and they've definitely got his head and his eye, that presence,” he said.

One big boost to Accelerate's appeal to both breeders and buyers, according to Ingordo, is the support he received in his first books.

“What was great for the stallion, the syndicate and then for me as a buyer of the Accelerates this year is how solid of a book of mares people presented to the horse. We've also gotten some really good updates. I just saw a colt that's going to one of the later sales and is a half to [2021 GII San Pasqual S. winner] Express Train (Union Rags) and he is a killer. I looked at several others around town and they're all really, really nice. They remind me of him at that stage of his life.”

Accelerate, a late-blooming May foal, did not see the starting gate until his sophomore year.

“He was broke and trained at Mayberry Farm and he always did everything right, but we had to remind ourselves that he was almost a June foal,” Ingordo said. “He hit another growth spurt once he went out to California so we weren't able to really run him as a 2-year-old. Our program is not to force them. We could have gotten Accelerate there faster if we wanted to, but that didn't make any sense for the horse.”

Accelerate's belated start makes Ingordo all the more excited to see his first runners begin their career earlier than their sire was able.

“I think they're going to be Classic types,” he said. “We missed that opportunity with Accelerate just because of his age, but I see these foals and they're a little more mature than he was. I could see him getting the Classic horse that every breeder and owner wants to get to the Derby or even some of the earlier 2-year-old races.”

At last year's weanling sales, Accelerate's offspring averaged $46,159 with 22 of 30 sold. His top lot, a filly out of Grade III-placed Mystic Mama (Scat Daddy), sold for $140,000 to Buena Madera at the Keeneland November Sale. Two Accelerate colts, one out of Aspiring (Seeking the Gold) and another out of Onestaratatime (Cape Canaveral), brought $110,000 at Keeneland November. 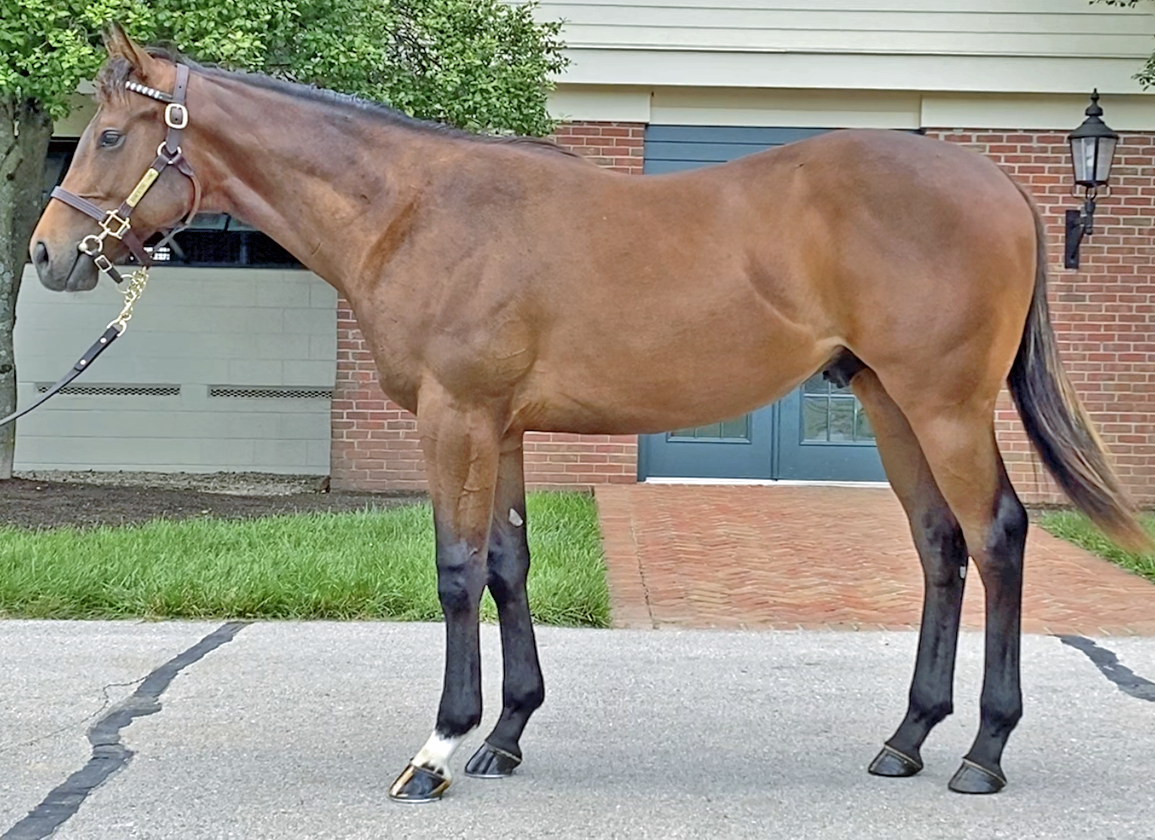 Accelerate yearling out of West Coast Chick sells as Hip 95 at the upcoming Fasig-Tipton July Sale.

Accelerate has 11 yearlings cataloged for the upcoming Fasig-Tipton July Sale on July 13.

Hip 95, a colt out of West Coast Chick (Malibu Moon), will sell with the Lane's End consignment. The youngster is the second foal from his winning dam, who was runner-up to GISW Paulassilverlining (Ghostzapper) in the 2016 GIII Vagrancy H. and is a half-sister to GISW and sire Klimt (Quality Road).

“The cross is very good,” Ingordo noted. I like the Accelerate, Lookin at Lucky, Smart Strike line bred over Malibu Moon. The colt is a bay version of his sire. He's an excellent mover, a good athletic type, and has the head, eye and shape that we've been talking about. I wish I owned him.”

Other Accelerate yearlings heading for the Fasig-Tipton July Sale include Hip 13, a colt out of a daughter of GISW and graded producer Harmony Lodge (Hennessy), Hip 61, a filly out of a full-sister to champion Trinniberg (Teuflesberg) as well as Hip 98, a filly out of a daughter of Grade III winner Win Crafty Lady (Crafty Prospector), the dam of three graded winners, including Harmony Lodge. See Accelerate's full Fasig-Tipton July roster here.

Ingordo said he has high hopes for this first crop of yearlings as they take on the sales, but added that he believes Accelerate and his progeny will find even greater success in coming years.

“I'm going to say this is the cheapest they're ever going be is out of this first crop,” he said. “I think they're going to be horses that are bought on the high end of a reasonable price. I'm pretty excited about them. I plan on every customer of mine that has an order is going to have one, because I'm a believer. Everybody has their own horses and they can get barn blind, but we like to put our money where our mouth is on this and this is a horse that I'm going to support at the sales, my clients want to support him at the sales, and hopefully we will help him then on the racetrack.”

Click here for the first feature in our 2021 First-Crop Yearling Sire series on Gainesway's Tapwrit.