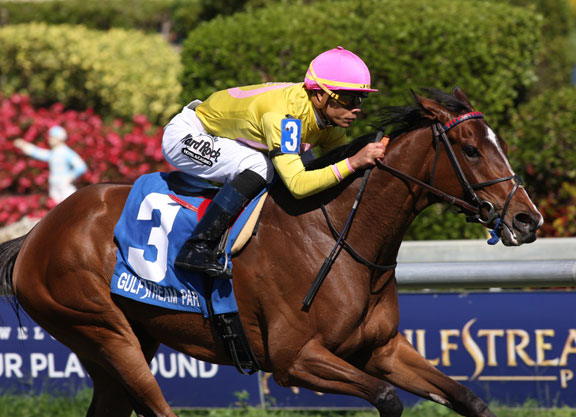 In this two-part series, we're delving into the thought processes that underscore which horses are plucked from Europe to race in the U.S. What hidden treasures are bloodstock agents scouting for? What sorts of European plunder can U.S. trainers most readily add a bit of spit and polish to?

Yesterday in Part I, we spoke with trainers and bloodstock agents about their preferences in terms of horses with established form. An area of agreement circled the hunt for horses still eligible for allowance races in the U.S. An area of disagreement was the desired distances European runners have performed over.

Today, we focus on the horses themselves–what purchasers look for in breeding, conformation and psyche.

David Ingordo, bloodstock agent: “Some American buyers have this opinion of what a European yearling looks like, but a good European horse looks like a good American horse. They're strong. They're good-boned. Their feet might look a little different because of the turf, but a good-looking yearling over there stacks up over here. I'd love to see more Americans going to the European sales.

If we bring a proper pedigree horse over here, bought as a yearling and raced in America, you could have a dual-threat stallion between the U.S. and Europe. If you look back, there's a lot of Danzig in European pedigrees. There's Northern Dancer. There's Mr. Prospector. Those are the bloodlines that do very well over here.

James Cassidy, trainer: They're outstanding with what they do with pedigrees over there compared with what we do over here. For one, they breed for racing and not for the sales. However, if you want to buy a colt with real substance and size, or a filly with a really good pedigree, you're spending a lot of money. So, for value, you're better off with a middle-of-the-road pedigree with some ability than you are with some fabulous pedigree, a Galileo or something, even though with fillies you can always breed from them.

Simon Callaghan, trainer: If you're looking for a filly with proven form, a 90-plus [Timeform rating], and residual value, then you're paying upwards of $400,000. A filly with a lesser pedigree, you're obviously buying them a lot cheaper. Then again, some stallions definitely move up when they get here. The Sir Prancealots, who isn't fashionable in Europe at all, they've come to California and done well.

We've done well with Dark Angel and Dandy Man. One stallion with a bunch of success, just as a less expensive stallion, is Equiano. Sir Percy, he's done well in America and they like the firm ground.

Aron Wellman, Eclipse Thoroughbred Partners: I would love to pick and choose when it comes to stallions and blood lines. But it's got so competitive that in my experience, trying to buy horses for a reasonable amount of money and trying to match that up with a top-class pedigree is close to impossible. So, in a lot of cases, you're trying to make your own pedigree with European imports, and they've just got to try and establish themselves on the racetrack, particularly with fillies, in order to establish some residual value.

Graham Motion, trainer: Look, you want an agile horse because the tracks tend to be tight. There are very few tracks where you're going to get away with a horse who is a big lumbering type–Belmont and Woodbine are the tracks that come to mind where you can get away with that. But you look at the Breeders' Cup at Del Mar last year, you need a horse that's quick to handle the turns and handle the fastness of the racetrack. We tend to run on firm turf that people in Europe would be worried about racing on.

Cassidy: I'm looking for a horse that's well-balanced with a good head and eye. As far as build and substance, it doesn't matter so much because when they come to America with these dirt tracks, in two or three months you can hardly recognize them because they're so buffed out due to the struggles they have getting over the track, and our feeding program is 10 times better than Europe. You have to be very careful with the feeding program when you bring a horse over–you have to go really slow, otherwise it's too rich, and you can wind up foundering them.

Nicolas de Watrigant, bloodstock agent: Turf horses for the U.S. will need to have a good balance, good feet and correct conformation. Size doesn't matter to me. We have bought some small horses and they have been very effective.

Marette Farrell, bloodstock agent: You have to find horses that you think will handle the dirt, and the trainers have to adjust accordingly. That's key with the European horses. I always look for a little more strength, especially behind, just to offset any potential issues. We get away with a lot more in Europe, they skip over the top of the ground. But here, you can't get away with that, training on the dirt.

That said, there's a lot of things that you can improve here. Shoeing is a big thing here. And obviously veterinary care. They've got extremely good vets over there, but we take it to the extra degree here in the U.S. In terms of soundness issues, we can help that horse when it comes to the States by tweaking a few things.

Miller: Physicality is probably the most important thing. I hate buying horses that are too small–I feel you need to buy at least a medium-sized, stronger horse to be able to train over the dirt tracks. A lot of the time, even though people make the case the small ones can stay more sound, I feel you need not necessarily a big horse but one with a bit of size and substance to it to train over the dirt tracks. Those light-framed horses, I don't feel we've had a whole lot of luck with.

Bradley Weisbord, bloodstock agent: You want a horse you think is going to stay sound because they're going to train on dirt. A lot of people don't realize when you buy these turf horses and they're going to train at Belmont Park six months out of the year, that's going to be tough on them. You need a strong horse. A well-made horse, even if they're not very big. They need to be well-made, and their action must be good.

Jane Buchanan, bloodstock agent: “It's tough bringing a horse over from Europe, but we're very lucky that at Fair Hill [training center], we can train on the Tapeta. A lot of European horses are generally on the small side, but they do come in all shapes and sizes. One of our best horses at the moment–one I had no part in purchasing–is Thewayiam, and she's on the smaller side. So, I think when you get to racehorses, it's not like buying a yearling–you can afford to be a little less choosy conformation- wise, size-wise, because it's mostly about the form.

Wellman: You need a sturdy individual with a proper constitution that is able to withstand the training here and still perform on raceday. You need some substance there, and good bone. With fillies, we've done very well with smaller types, slighter builds, that have a lot of agility, athleticism, that bounce off firm ground, and have the ability to really accelerate and handle tight turns. A small filly from Europe does not deter me.

Pete Bradley, bloodstock agent: You have to stay away from horses that are extremely upright, and horses that have extremely long pasterns. You want a good economy of motion–you don't want it to look like twin propellers going down there, knees flailing left and right. How they train in Europe, you can get away with some things much more than with the pounding that horses get in their training over here [on the dirt].

Brendan Walsh, trainer: The European horses, some of them that are a little screwey over there actually fit here. It's all very well over there, this 20 to 25 minute walk to the gallops, then the walk back. But if a horse is jig-jogging the whole time across town at Newmarket, they're wound up by the time they get to the gallops. Then coming back, god help you! Here, they go out and come back in and that's quick. Sometimes I think that can suit them. I don't think there's one rule that says they're not going to fit over here.

Weisbord: This is huge. You're going to need a good training horse, especially when we send them to some of our larger trainers who have 150-200 horses in training. You really need them to be able to fit in line and adapt well.

Tom Morley, trainer: Obviously you don't want to get to the Tattersalls Horses in Training sale and see the horse jig-jogging around the pre-parade ring with white sweat between his legs. I'm probably going to stay away from that horse, because the paddock at Saratoga is a cauldron. Yes, it's important, but I read a story the other day about how a $6 pair of ear plugs won us an American Triple Crown. We have plenty of tricks with hoods and ear-plugs, etcetera, just to make it easier on these horses.

Bradley: I like a horse with a good mind. I've had problems with those that I thought would settle into the schedule over here and didn't. I would say I try to stay away from the flighty, washy kinds of horses.

de Watrigant: “I think that in general, the Europeans have a false opinion of the American training. For me, yes, a difficult European horse can improve in the U.S. because, contrary to popular belief, the American training is much less intense than Europe–the daily canters much less fast. They “breeze” for a much shorter distance, so a less difficult recovery is great for [the horse's] mental [well-being].

Callaghan: You've got to have a horse with a really good temperament for reaching their full potential. The horses that are hard to train, for me, you're fighting an uphill battle.