European Imports: What Works In America? 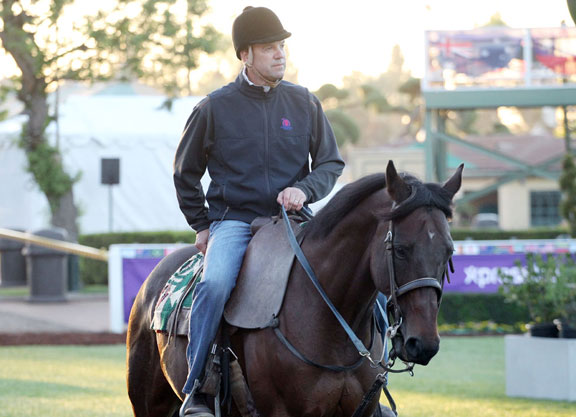 Europe has long proven a happy hunting ground for buyers from and for the U.S., and with an expanding Stateside turf schedule, the spigot is not likely to tighten shut any time soon. So, what do today's buyers look for in horses bred and raced in Europe? We asked a number of trainers and bloodstock agents who have struck gold with European imports about their winning formulas.

Answers varied depending on things like depth of pockets and final destination (East or West Coast). One unifying message, however, was that the European marketplace has grown increasingly competitive in recent years due to an influx of buyers from Hong Kong, the Middle East, Japan and Australia.

The first in this two-part series looks at the qualities of form horses that best suit American racing. Tomorrow, we'll narrow in on the horses themselves: pedigrees, physique, mental aptitude and the like.

Brendan Walsh, trainer: “Obviously distance wise, you don't really want to be bringing back a horse here if they've been running further than a mile. Any horse that can run six or seven [furlongs] over there is probably going to get a mile over here. Any time we've bought horses from there, we've been looking for value–something unexposed, not necessarily an out-and-out proven horse.”

David Ingordo, bloodstock agent: “You'd like a horse that looks like it can go through the conditions here. Our prize money is so good, if a horse over there hasn't done it immediately, we can buy it and have a different experience over here, maybe help it along. You see a lot of that on the East Coast. You can buy them where your risk might be $50,000-100,000, but before you figure out whether the horse is a stakes-quality horse, you can still earn a big chunk of money back, get your picture taken, have some fun with it.”

Ben Cecil, trainer: “The obvious thing is firm ground–you don't want a soft-ground horse. And I think our racing [on the West Coast] isn't as tough as it used to be, 10 to 15 years ago. In the old days, I used to think you'd need a 100-plus Timeform [rating]. Now I think an 80-plus Timeform [rating] is enough to be competitive on the grass here. The upside of that is you've got handicappers in Europe winning listed and graded stakes over here.”

Pete Bradley, bloodstock agent: “First, I look for 2-year-olds. I like to find a horse who has made roughly two to four starts, is improving and may look like a horse who could go further but has enough precocity to win over six [furlongs at two]. I kind of shy away from five-furlong races. I'm always looking for horses that can go at least eight furlongs, and if you're lucky, 10 furlongs. I don't think our racing lends itself to European sprinters, necessarily. And I like the kind of horse who can finish well.”

Graham Motion, trainer: “I think more of late, I've had 2-year-olds turning three that are a little bit proven. But I think the problem becomes, the more form they have the less viable they are–there are so many people in the market for them.”

Joe Miller, bloodstock agent: “We've bought horses that are out-and-out stayers before, but there's just not enough races for them. And then ultimately down the road for residual value, there's not enough people wanting to buy those 10 to 12-furlong horses as broodmares. Really, the market for broodmares is in sprinter-milers. Conditions are important. We prefer to buy horses that are still eligible for allowance races. In New York and California, the way that they write the allowance races, you can have a horse in England with multiple wins but is still eligible for conditions races here.”

Jane Buchanan, bloodstock agent: “A lot of people are trying to buy those horses with a bit more stamina, the 1 1/4 mile to 1 1/2 mile horses, because suitable races for them, even if they're stakes horses, can come up quite light throughout the year. We've run in races like the [GI] United Nations [S.] at Monmouth Park, and it's not like they're always really tough Grade Is. Sometimes, these races can be on the easier side. And the New York racing program is writing more and more longer races for these types of horses, with the added purse incentive.”

Simon Callaghan, trainer: “Typically, the races get a little easier when you go further than a 1 1/8 mile or 1 1/4 mile, but the ideal filly would be the six or seven furlong fillies that can stretch and get a mile here. Age wise, that doesn't really matter. We've done well with a variety of horses–some that have come over as 2-year-olds, some that have come over as 4- and 5-year-olds.”

Bradley Weisbord, bloodstock agent: “We have bought horses which are lightly raced, but then, we've bought horses who have run 20 times–the amount of runs doesn't really impact us. We'll generally stay in the 2-, 3-, 4-year-old range. And we obviously want horses who travel on good ground. Many European races are on soft ground, but the form won't translate. We generally stay away from sprinters–we want to see them go at least a mile. Even those 2-year-olds we've bought that haven't yet gone a mile, we want to know they have the pedigree to do so. I believe we have really good sprinters in America but not enough races for them. But if they go a mile-plus, you get a much better sample set of races.”

Cecil: “For California, you've got to have a little speed–it's not easy to close a lot of ground. That said, it's harder for a [European] front-runner to adjust here because the races are run that much quicker.”

Marette Farrell, bloodstock agent: “An on-the-pace sort with no turn of foot, that doesn't necessarily translate over here. You do want to see a turn of foot. You'd like to see a tactical horse, but you don't want one who is one-paced in their races. They have to show a change of gears.”

Tom Morley, trainer: “I'm not too worried about running style. If they're a good horse, they'll get the job done. Obviously, you don't want to be buying a mile-and-a half horse out of Europe if they're a slow starter because when you get to the [G1] Manhattan H., they go fast from the word go. And when you get left 12 lengths at the start, it's going to be very difficult to win the race. It's really more a question of whether they have the ability to kick in and go on and win at the business end of their races.”

Aron Wellman, Eclipse Thoroughbred Partners: “First and foremost, the ingredient I believe a horse must possess to be effective in American turf racing is a turn of foot–the ability to accelerate. That's not a profound observation by any stretch of the imagination, but it's an absolutely necessary component of any horse that's going to be effective at a high level.”

Ingordo: “I worked with Bobby Frankel, who really pioneered the importation of horses from Europe to America. When he made an investment, he wanted to make sure he could improve the horse, whether it was in the feeding, the training. He had immense respect for certain trainers, but he knew that if a horse came here from this trainer or that trainer, even if Juddmonte sent it, he knew the best he was going to do was probably maintain its form, not necessarily improve it.”

Walsh: “You like to buy them out of places where they haven't run too, too much–they've still got some mileage left on the clock.”

Morley: “I think when you're buying young horses, it's important to know what nursery they came out of and who raised them. And I think when you buy horses in training, you need to be a bit canny about who you do and who you don't buy off.”

Buchanan: “The thing I like about going to the sales is that you get to see the horses themselves. The most important thing about buying privately is you need to have eyes and ears and a trustworthy person that knows what they're doing working with you. I can't fly over [to Europe] every time I make an offer on a horse, so my most important thing is having someone I trust on the other side.”

Race Off the Plane, or Time to Acclimatize?

Motion: “I have a little bit of a problem racing off the plane. Often, they come to me, and by the time they get here, they've had a month not doing much–particularly these private purchases. My preference is to get them here, give them a week or two to get adjusted, especially in the summer when it's so hot, then give them a month or two, breeze them a couple of times. I'm reluctant to be in a hurry with them.”

Farrell: “I was assistant to Niall O'Callaghan, who in turn was assistant to Tommy Skiffington. And Tommy Skiffington was the guy back in the day for importing European horses, and European fillies especially. Niall always spoke about how they managed European horses, which was to run them straight off the plane, never give them time to acclimate. Or else, you had to give them six months. They had to then acclimate to the training here, getting used to the surface, swapping leads, going through the sore stage. So, that's how Tommy did it, one or the other. And he had huge success.”

Bradley: “I like sending horses to trainers that give them time to acclimatize. I think you can run straight off the plane–I've had some success doing that. But, most of the time, I think these horses take a minimum of 60 days and often 90 days to really get into the routine over here, to make the transition.”

Callaghan: “If you do run off the plane, you've then got to give them a good period of time to acclimatize. In an ideal world, I like to get them, give them the time to settle in, 30 days to jog over the track, then another 30 days to gallop, get ready to start breezing. In the long-term, that's the best way.”

Part Two of this series will appear in tomorrow's TDN.