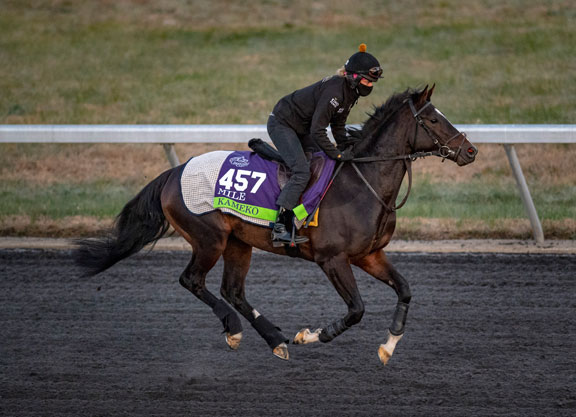 LEXINGTON, KY–With temperatures plunging into subzero depths overnight on Sunday, there was a truly wintery feel at Keeneland on Monday morning to coincide with the release from quarantine-a concept that many more of their human custodians can relate to in 2020–of most of the European Breeders' Cup raiders. (Click here for a video of European Breeders' Cup contenders training on Monday)

As tractors worked over the main dirt course attempting to thaw it, training was restricted in the early morning hours to Keeneland's training track, and the Jessica Harrington-trained fillies Cayenne Pepper (Ire) (Australia {GB}) and Oodnadatta (Ire) (Australia {GB}) were the first to step onto the track at 6:30 a.m. for one lap at a trot. They were followed shortly thereafter by John Gosden's trio of Lord North (Ire) (Dubawi {Ire}), Mehdaayih (GB) (Frankel {GB}) and Terebellum (Ire) (Sea The Stars {Ire}), who completed a similar exercise.

G1 2000 Guineas winner Kameko (Kitten's Joy) appeared in rude health as he completed a lap each at a trot and a canter, and his work rider Maddy O'Meara said, “He seems in really good form. He traveled over well and is settled. I think he was pleased to get out onto the training track for a leg stretch.”

Kameko–who is now a stone's throw from where he was born and raised at Calumet Farm bordering Keeneland and the sales pavilion where he was bought by Qatar Racing for $90,000 two years ago-is looking to continue his renaissance in the GI Breeders' Cup Mile after breaking a string of fourth-place finishes in Group 1 company over the summer with a victory in Newmarket's G2 Joel S. on Sept. 25.

Lord North, meanwhile, looks to return to the form that saw him win Royal Ascot's G1 Prince of Wales's S. in June in the GI Breeders' Cup Turf. The 4-year-old gelding ran a creditable third behind Ghaiyyath (Ire) and Magical (Ire)-and ahead of Kameko-in the G1 Juddmonte International on Aug. 19 before trailing in last over the soft going in the G1 Champion S. on Oct. 17.

Lord North's challengers in the mile and a half Turf will include not only his stablemate Mehdaayih but also the Aga Khan's progressive 4-year-old filly Tarnawa (Ire) (Shamardal), who has built on a trio of pattern-race wins last year at three to win back-to-back Group 1s at ParisLongchamp in the Prix Vermeille and Prix de l'Opera over a mile and a half and mile and a quarter, respectively, while giving weight to top 3-year-old fillies Alpine Star (Ire) (Sea The Moon {Ger}) and Raabihah (Sea The Stars {Ire}). Tarnawa followed the Jessica Harrington-trained Cadillac (Ire) (Lope De Vega {Ire}) onto the training track shortly after 7 a.m. The latter was among a slew of contenders for the GI Breeders' Cup Juvenile Turf out stretching their legs, and those also included the Ralph Beckett-trained duo of New Mandate (Ire) (New Bay {GB}) and Devilwala (Ire) (Kodiac {GB}). The former looks to build on a three-race win streak that includes the Listed Flying Scotsman S. and the G2 Royal Lodge S., while the latter comes into this off a respectable fourth in the soft-ground G1 Dewhurst S. at 100-1. Michael Bell, who brings Qatar Racing's The Lir Jet (Ire) (Prince of Lir {Ire}), is looking for his first win at the Breeders' Cup. That lean and leggy bay enjoyed a canter around the training track in the slipstream of Roy and Gretchen Jackson's formidable mare One Master (Ire) (Fastnet Rock {Aus}) just before 8 a.m.

The Frederic Rossi-trained Sealiway (Fr) (Galiway {GB}) looks to make it back-to-back Group 1 wins in the Juvenile Turf off an eight-length score in the G1 Prix Jean Luc Lagardere in what was one of the most eye-catching performances on Arc day, and his jockey Mickael Barzalona was on course to watch the colt train. Barzalona, who won the Breeders' Cup Turf aboard Talismanic (Medaglia d'Oro) in 2017, said, “I flew over on Friday and I'm delighted to be here. The weather is colder than I expected but its brilliant to be out at the training track to see Sealiway. I'm very much looking forward to riding him and the plan is to sit on him tomorrow or Wednesday.”

The winner of the last three editions of the G1 Prix de la Foret on the Prix de l'Arc de Triomphe card, the 6-year-old One Master just doesn't seem to know how to run a bad race and was beaten a half-length in the G1 British Champions Sprint S. when backing up to six furlongs over the soft ground at Ascot on Oct. 17. She lines up on Saturday in the Mile, the race in which she was fifth, beaten a length, two years ago at Churchill Downs behind Expert Eye (GB) (Acclamation {GB}).

One Master will have to contend with not only the 2000 Guineas winner Kameko in the Mile, but also this year's winner of the Irish equivalent, Siskin (First Defence), who was fresh on the training track on Monday, shying slightly as he jogged past the assembled railbirds before settling into a professional canter. Juddmonte homebred Siskin-a talented by quirky individual who has some questions to answer after playing up in the stalls last out prior to finishing fourth in the G1 Prix du Moulin de Longchamp-is a first Breeders' Cup starter for trainer Ger Lyons. Mile contender Safe Voyage (Ire) (Fast Company {Ire}), likewise, is a first runner at the meeting for trainer John Quinn, and the gelding is, remarkably, rounding into his best form at age seven with wins in this season's G2 City of York S. and G2 Boomerang S. followed by a close third behind One Master in the Foret.

There are, then, quite a number of European raiders who will be writing exciting new chapters for their trainers should they emerge victorious, and another of those is the rapidly progressive Audarya (Fr) (Wootton Bassett {GB}). She is the first Breeders' Cup starter for her Newmarket-based trainer James Fanshawe, and while many of the other European-based trainers will arrive in the Bluegrass over the coming days, Fanshawe and his wife Jacko were on hand to oversee their G1 Prix Jean Romanet winner's exit from quarantine and subsequent canter on Monday morning.

Alison Swinburn's Audarya was beaten a nose in her lone start at two and showed plenty of promise last year at three when winning twice at novice and handicap level and finishing second a further three times, including in the Listed Prix Coronation going a mile at Saint-Cloud. After a pair of off-the-board finishes over that same trip at listed level to start her current campaign in June, Audarya flourished when stepped up to a mile and a quarter, winning a Newcastle handicap prior to the Romanet at 48-1. She showed that effort was no fluke when finishing a length behind Tarnawa in third in the Prix de l'Opera.

“After she won the Prix Jean Romanet at Deauville we thought 'if she comes out of it in one piece we'll go to the Prix de l'Opera and then the Breeders' Cup,'” Fanshawe said of the filly's path to Keeneland. “This season has been completely different with COVID disrupting everything, but her owner Alison Swinburn was also keen to go for it, and she's got a lot of attributes that should suit the race.”

“She's a very good-looking filly; from the moment she came in she was a very good-looking yearling and she always showed ability,” Fanshawe added. “She was a little bit quirky in some ways but she's quite a big, rangy filly and she's taken time to come to herself. She nearly won at two and at three she took a while to get going, and I think a lot of it comes down to the fact that she's been much better going a little bit further than the mile; she likes a strongly run mile but she was a bit keen as a 3-year-old, so we went to a mile and a quarter then came back. And since we stepped her back up to a mile and a quarter for her prep race for Deauville she's been more effective. And I think she's got stronger as well.”

Fanshawe has been training for over 30 years and has orchestrated the careers of Group 1 winners like Soviet Song (Ire), The Tin Man (GB), Seal of Approval (GB) and Society Rock (Ire). He said he has always hoped to have a runner at the Breeders' Cup, and a myriad of factors collided to make it happen with Audarya, including perhaps the later start to the racing season necessitated by COVID.

“I think anyone who trains racehorses would aspire to have a runner at the Breeders' Cup,” he said, “It's something you always have in the back of your mind, but it always comes quite late in our season and it's not a meeting you can go to as an afterthought. We'd been thinking about it for a while and hopefully everything goes smoothly for her.

“Keeneland is more European; it has a similar climate to what we'd have at home this time of year. I had a walk of the course this morning and it looked in really good nick. In theory conditions should be good for the European horses, the weather and the track.”

Another British-based trainer already on hand was Nigel Tinkler, who put his GI Juvenile Turf Sprint contender Ubettabelieveit (Ire) (Kodiac {GB}) through his paces himself. Tinkler, a former jumps jockey and successful trainer both on the flat and over jumps, like Fanshawe sends out his first Breeders' Cup starter. Ubettabelieveit, the winner of the G2 Flying Childers S. over five furlongs at Doncaster on Sept. 11, is one of two representatives at the meeting for breeder Ringfort Stud in addition to GI Juvenile Fillies' Turf contender Miss Amulet (Ire) (Sir Prancealot {Ire}), who was also on track on Monday. Both subsequent pattern-race winners that were bought for €35,000 and €1,000, respectively, as foals, the Ringfort-bred runners do, indeed, give smaller operators a reason to believe.

The last of the European contingent to arrive at Keeneland will be the Aidan O'Brien-trained runners, who were scheduled to touch down around 8 p.m. on Monday and will therefore not make an on-track appearance until Thursday.