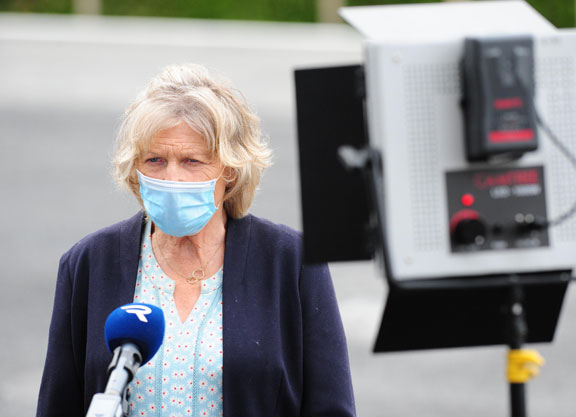 Jessica Harrington at The Curragh in August | racingfotos.com

The trainer originally best known for many high-class jumps winners that has made an eye-catching advance on Flat racing's top contests in recent years will share her thoughts with the TDN on a monthly basis in this most unusual of seasons.

The Breeders' Cup is a fantastic meeting, one that serves as an end-of-year championship between Europe and the U.S. In a year such as this it is fantastic that we are still able to go over and have those great match-ups.

I had my first runner at the Breeders' Cup last year at Santa Anita, with Albigna (Ire) (Zoffany {Ire}) finishing fourth in the GI Breeders' Cup Juvenile Fillies Turf, and I am looking forward to running three horses at Keeneland next weekend. I can remember Breeders' Cups going way back, like when Lester Piggott came out of retirement and won the 1990 GI Breeders' Cup Mile aboard Royal Academy. That was the most amazing race and there have been loads of fantastic races at the Breeders' Cup, so it's great to be part of it. I'm hoping the weather in Lexington stays nice and dry; I'm hearing they had some rain recently but that it's supposed to be nice and dry next week, so as long as the ground is nice ground I'm perfectly happy.

Sarah Kelly's 3-year-old filly Cayenne Pepper has been very good this year. She was a bit slow to come to hand, not running until June after showing such promise last year when winning her first three starts, including the G3 Flame of Tara S. and finishing fourth in the G1 Fillies' Mile. Cayenne Pepper was second behind Magical (Ire) (Galileo {Ire}) on her first run this season over 10 furlongs in the G1 Tattersalls Gold Cup on June 28, and then was twice beaten over 12 furlongs when second in the G1 Irish Oaks, beaten by Even So (Ire) (Camelot {GB}), and by Tarnawa (Ire) (Shamardal), Dermot Weld's horse who also goes to the Breeders' Cup, in the G3 Give Thanks S. in Cork.

I suppose both those runs were a bit disappointing, but then I brought her back to a mile and a quarter at The Curragh where she won the G2 Blandford S. very easily from Amma Grace (Ire) (Galileo {Ire}), who won the Listed Trigo S. at Leopardstown last weekend, so our form has been well franked. I think Cayenne Pepper is a proper mile and a quarter filly. She's run on good ground, good to yielding ground, and good to soft ground so she'll go on any sort of ground. She's in good form, she's had just the four races so far this year so she hasn't done too much.

Bob Scarborough and Susan Magnier's Oodnadatta won her maiden impressively first-time out at Leopardstown on June 21 and then she ran back at Leopardstown in the G3 Silver Flash S. She got a bump jumping out of the stalls and the whole thing went wrong and she finished fifth, beaten 7 1/2 lengths. So we then let her be and the next time we ran her in the G1 Moyglare Stud S. on Irish Champions Weekend. She ran very well again over seven furlongs to be a fast-finishing third. She will appreciate the step up in trip as long as the ground is nice ground, and I think she's improved a bit since her last run.

Cadillac ran very well the first time he ran, winning first-time up in Leopardstown very easily and we were delighted with him. He then went to The Curragh for the G2 Futurity S. and he finished second, a half-length behind Mac Swiney (Ire) (New Approach {Ire}), who won the G1 Vertem Futurity Trophy last Saturday. In September he went to the G2 KPMG Champions Juvenile S. on Irish Champions Weekend and he won that beating Van Gogh (American Pharoah), who won the G1 Criterium International last weekend, so his form has been franked a few times.

We then went to Newmarket for the G1 Dewhurst S. and the ground was very soft and he finished fifth, beaten 4 1/4 lengths, behind St Mark's Basilica (Fr) (Siyouni {Fr}). He just got stuck in the ground; both times he's been beaten the ground has been soft so we really are looking for a bit of nice ground for him, and they seem to think it's going to be nice at Keeneland.

Cadillac is owned by Alpha Racing, which is a syndicate we set up and it's got some American interest in it as well. This is the second year we've been running Alpha Racing and we'll be continuing next year. It's very exciting for the syndicate members because Cadillac was bought for €40,000 as a yearling at Goffs Orby, so it's very exciting for them to have a horse that can run in the Breeders' Cup.

We set up Alpha Racing two years ago with a double view of both racing and trading horses. We want to give the syndicate members lots of action on the racecourse with also a very strong commercial objective of trying to generate a return on investment. It can be a lot of fun owning a racehorse, but in the long term if you're spending a lot of money it's important to see some return on investment. We have eight horses in the syndicate and we do take it strongly into consideration that they're traded at the opportune time-from the first year we've traded seven of the eight.

The syndicate members were keen that if we came across a horse that was of the highest order that we'd roll the dice and let him run and that decision was taken with Cadillac. But in general a part of our job, as much as it is to race them and win, is to make it commercially viable and trade them.

While we have been preparing our Breeders' Cup runners we have also been out shopping for our next stars at the yearling sales. With the bulk of the yearling sales now over for another season, I can say it was a strange year. I feel for Goffs, who suffered having had to move their sales overseas; that made a big difference to them. Tattersalls Book 1 was down and suffered a bit, but then you came along to Tattersalls Book 2 and it defied all the trends, which was great. That was good for the industry and the breeders, but it made it quite hard to buy horses, being on the other end of it.

It is always interesting to see the first progeny of new sires, and a few first-season sires stood out to me. The yearlings by Churchill (Ire) were very good-looking horses, and the Caravaggios looked very speedy; they look like they'll run. And we saw some very nice yearlings by Almanzor (Fr).

In terms of other young sires, I think Belardo (Ire) has done very well as a first-season sire; he is probably still a bit under the radar. I think another who has done very well this year is Pride Of Dubai (Aus). And of course there is Sea The Moon (Ger), who is the sire of the Niarchos Family's Alpine Star, with whom we won this year's G1 Coronation S. Sea The Moon has had a very good year on the racecourse and people are starting to follow up in the sales ring, too.

I am very fortunate to be able to train for some leading owner/breeders, but also supplement those with some stock from the sales for groups like Alpha Racing. For the syndicate, when we're out at the sales we're looking for a horse that will run at two. Hopefully they will go on at three, but firstly we want them to run at two. We're looking for the same things that most people look for: a good-looking, well-balanced horse, and hopefully the mare has produced a winner or it's the first foal, and by a sire we like. When you get them in from owner/breeders they are as they are, but when you buy them you can pick and choose what you like.

There is plenty to look forward to with the next generation set to arrive in the yard in the months ahead, and in the meantime there is the Breeders' Cup. I'll be traveling to Lexington on Tuesday; having three runners in the Breeders' Cup might never happen again, so I must be there to see it. Although I have been to Keeneland for the sales I have never been there for racing, so I'm greatly looking forward to it. I'm thrilled with all the horses and I think all three go in with an each-way chance.