Ete Indien Runs Them Off Their Feet in Fountain of Youth 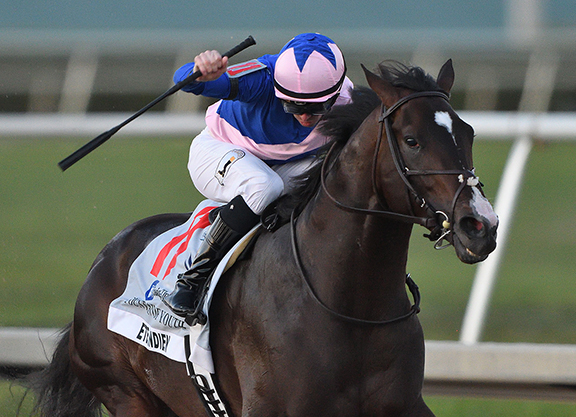 Ete Indien got over and to the lead from his wide draw, and never looked back as he streaked home a dominant winner of Saturday's GII Fasig-Tipton Fountain of Youth S. despite drifting out. Heavy favorite Dennis' Moment (Tiznow) backed up early and trailed the field home.

Gunned from his outside post and over to the rail with a short run into the first turn, Ete Indien maintained a clear advantage down the backside and appeared to be traveling comfortably as he posted splits :23.14, :46.72 and 1:11.30. He was several lengths clear heading into the short stretch, and widened his advantage from there while getting out a bit like he had two back.

“The horse needs to cooperate, especially in the first turn. This is when you need to focus on the start and how you'll take the first turn,” said rider Florent Geroux, who replaced the injured Luca Panici. “As soon as I secured a spot, I just put the horse on cruise control and the horse was nice and easy, started flopping his head and took a nice breather. When he got into a rhythm, he just felt very good. He wanted to get out at first when he saw the lights, but he's very professional. I didn't think he was that quick, to be honest. I didn't think he had this kind of speed, which gives us way more options in the future.”

A debut winner from off the pace turf sprinting here in September, Ete Indien was eighth from very far back in Keeneland's GIII Dixiana Bourbon S. over a grassy 8 1/2 panels in October. He resurfaced to best the highly regarded Toledo (Into Mischief) in a one-mile main-track optional claimer Dec. 20, and again finished ahead of that runner, but behind GISW Tiz the Law (Constitution), in the GIII Holy Bull S. over track and trip Feb. 1.

“We have been through a week of hiccups,” said winning trainer Patrick Biancone. “First we lose our jockey and second we draw [outside], but good horses can overcome everything and I think he's an exceptional horse. We look forward to the future. I want to see how he comes back, how he works the next time. He'll need to improve a little bit to be able to win the [Mar. 28 GII] Florida Derby. We're here in Florida, he's training in Florida and we love Florida. I think we'll take a shot if he's in good form.”

Dennis' Moment's trainer Dale Romans said immediately after the race: “I just hope he's all right. We'll take him back and check him out. That wasn't what I was expecting. When he didn't get to the lead early, I was concerned.”

He later tweeted that the flashy 'TDN Rising Star' appeared fine and without injury back at the barn.

Click here for more on Biancone and Ete Indien.

Ete Indien becomes the second graded stakes winner and third black-type winner overall for his sophomore sire, Gulfstream's 2014 GII Ft. Lauderdale S. winner Summer Front. A $475,000 Keeneland April purchase, millionaire Summer Front placed in five Grade I events and now stands at Airdrie Stud. Ete Indien's broodmare sire, Mizzen Mast, has sired the dams of 16 stakes winners, although Ete Indien's dam was not a winner herself. She has a 2-year-old colt by Air Force Blue who brought $100,000 as a 2018 Keeneland November weanling and a yearling filly by Runhappy who brought the same price at last year's sale. East India's dam is a half to the dams of 2008 GI Breeders' Cup Classic winner Raven's Pass (Elusive Quality), GISW No Matter What (Nureyev), and MGSW & MGISP E Dubai (Mr. Prospector).