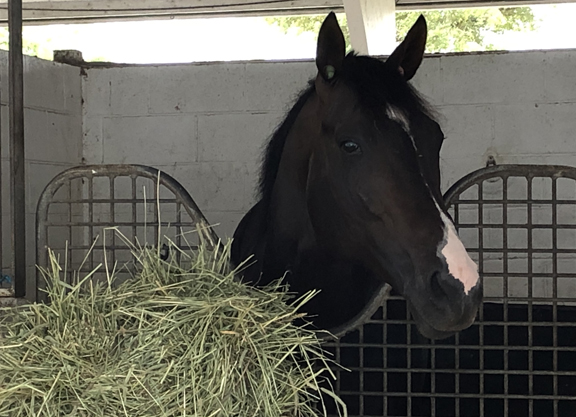 Trainer Patrick Biancone has been down this road before. That is, the road to the Triple Crown. A Grade I winner at two and three, Michael Tabor and Derrick Smith's Lion Heart finished second, 2 3/4 lengths behind victor Smarty Jones in the 2004 GI Kentucky Derby. Fast forward to 2020, Biancone has not one but two chances to go one better on the first Saturday in May. Few will argue that the current star of the barn is recent GIII Sam F. Davis S. scorer Sole Volante (Karakontie {Jpn}), however, a victory by Ete Indien (Summer Front) in Saturday's GII Fasig-Tipton Fountain of Youth S. might blur that line of demarcation. Jockey Florent Geroux will fill in for the colt's regular rider, the injured Luca Panici.

Campaigned by a partnership consisting of Linda Shanahan, Sanford Bacon, Dream With Me Stable and Horse France America, the dark bay was unveiled going five furlongs on the Gulfstream turf last September–coming from off the pace to win by a neck–before finishing eighth routing for the first time in the GIII Bourbon S. at Keeneland the following month. Given a brief freshener, the colt returned to the Hallandale oval for his next start–a one mile optional claimer on the dirt Dec. 20-and led for most of the way en route to a comfortable, albeit slightly green, 2 1/2-length victory (video).

“That day he won, he was drifting out in the stretch and looking everywhere,” the Frenchman recalled. “Well, we addressed that problem.”

Explaining the decision to try him on the dirt despite having already shown ability on the turf, Biancone said, “He's bred fifty-fifty turf and dirt. His [grandfather] is by War Front; they go on dirt, they go on turf. I mean when you have a good horse, all the good races on the turf are from July to September, so we have nowhere to run except a few little [turf] stakes. While he was running really good on the turf, we decided to put him on the dirt once and see how it goes. A mile in 1:35[.07] was enough for us to know that he liked it.”

Installed the 4-1 third choice in his latest start in the Feb. 1 1 1/16-mile GIII Holy Bull S., he set the pace, but was caught late by favored Tiz the Law (Constitution) and had to settled for second, beaten three lengths (video).

“I think he ran a very good race,” said Biancone of his charge's Holy Bull effort. “We changed a few things [leading up to the Holy Bull] and he ran very well. He missed the start a little bit. I mean, I don't think it would have changed the result, but he'll need to progress on that. It's all a question of how much they progress.”

Asked to compare his two sophomore stars at this point, Biancone said, “Ete Indien's very different [type of horse] than Sole Volante, a horse who has a lot of confidence in himself. I will say [Ete Indien] is a little bit more like most of the War Front family, he's a little bit more anxious and doesn't learn as fast.”

Subsequent to his Holy Bull effort, Ete Indien worked seven furlongs in 1:23.20 over the Palm Meadows turf course Feb. 16 before following up with a bullet four-furlong move [1/13] in :48.00 over the training center's main track Feb. 26.

Asked about his propensity to work horses on both the dirt and the turf, Biancone offered a practical explanation.

“I work them all on the turf, not just him,” he said. “Even the ones who are not as good and not so famous. I think the [turf] track is extremely good [at Palm Meadows] and it's a beautiful training facility. We have the chance to [work over] it four times a week, so we try to take advantage of it. It's also kinder on the legs and so far it seems to work.”

Given the step up in class to face the likes of some heavy hitters, including multiple stakes winning Chance It (Currency Swap) and graded winners Dennis' Moment (Tiznow) and Shotski (Blame), Biancone admits that a solid finish in the Fountain of Youth would be needed to forge ahead to the Churchill Downs.

“He'll tell us what to do next,” he said. “At this age, it's just a question of improvement. They need to improve from race to race, without a hiccup. You also need to be lucky. Then we'd decide the next step after that. We can dream and talk about Derby, and while he is a very talented horse, he will have to improve a lot to have a chance in the Derby. “