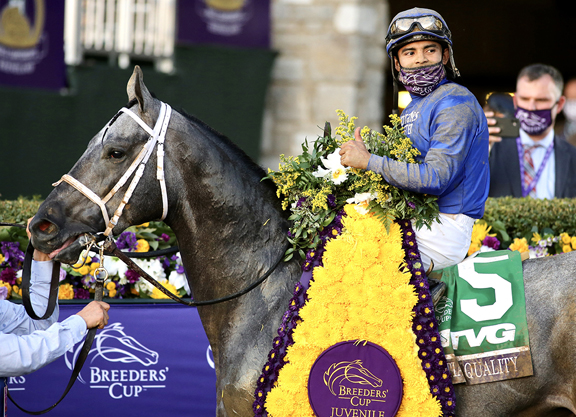 Defending juvenile champion Essential Quality (Tapit) is expected to make his next start in the Apr. 3 GII Toyota Blue Grass S. at Keeneland, according to trainer Brad Cox Tuesday. The Godolphin homebred, who is slated to post his final major work this Saturday, most recently won the GIII Southwest S. at Oaklawn Feb. 27.

He added, “He'll go five-eighths at the Fair Grounds Saturday morning and then on to the Blue Grass.”

“We weren't quite where needed to be with Caddo River last Saturday [in the GII Rebel S.],” admitted Cox. “Caddo River showed that he wants to be very close, and probably, the longer the distance–a mile and an eighth and beyond–he would likely be more forwardly placed. Hopefully, we can make some adjustments there and we can be back on track for the [GI] Arkansas Derby [Apr. 10].”

And while 'Derby Fever' can often prove overwhelming with even one Classic contender, Cox admits he relishes the added pressure.

“There is a lot that goes into the Derby. I think it's more because you're not only watching your horse, but you're also watching every impressive horse throughout the country,” he explained. “When there is a horse that breaks its maiden and you wake up the next morning and there is a new TDN Rising Star on your email, the first thing you do you click and watch the replay. There is definitely more to the Kentucky Derby dream. It represents so many horses and so many people's goals. I really enjoy it. This is what it's all about. Watching other horses' races and trying to figure out how our horses will stack up.”