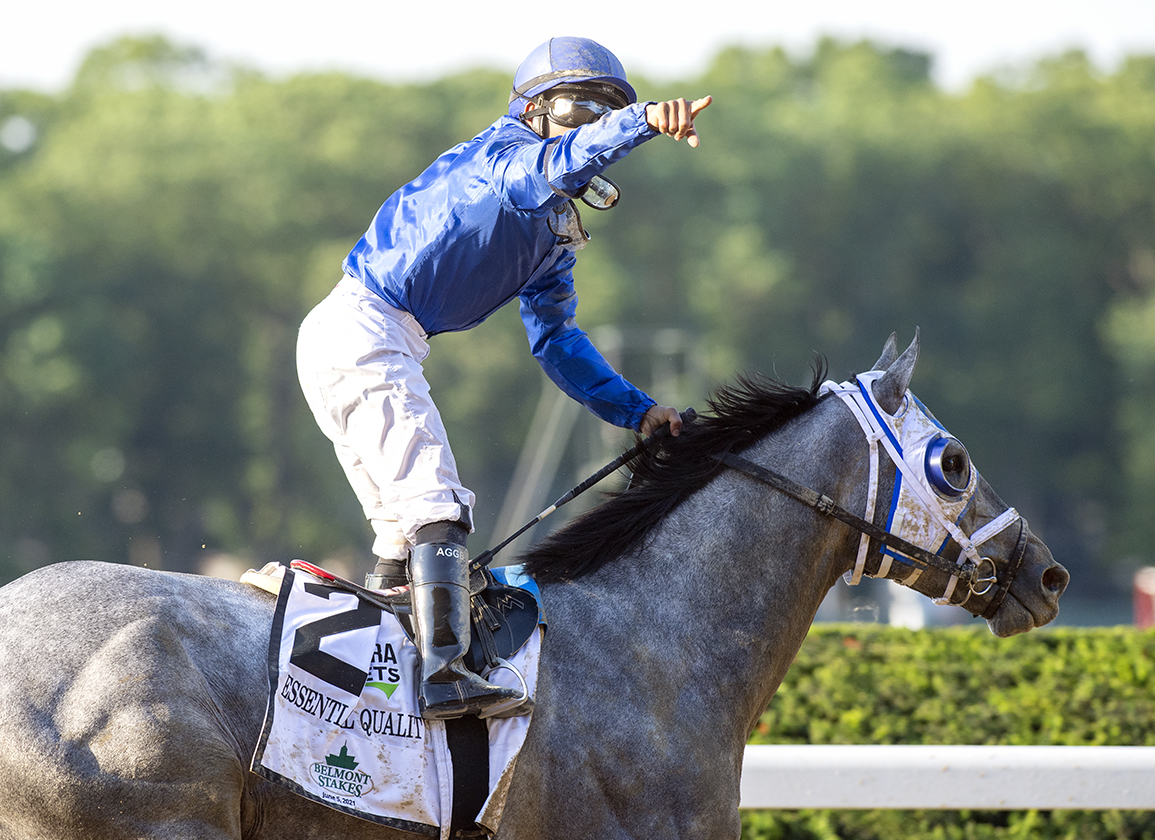 A total of 22 horses were entered in the GI Longines Breeders' Cup Turf with 14 making the body of the field, topped by last year's winner Tarnawa. Domestic Spending tops the U.S. contingent with a pair of Grade Is this year and a last-out second in the GI Mr. D. S. Aug, 14. Other top American contenders include MGISW Gufo (Declaration of War) and MGSW United (Giant's Causeway). Exactly half of the field hails from overseas, six from Europe and one from Japan, including the Aidan O'Brien-trained Love (Ire) (Galileo {Ire}) and the Charlie Appleby/Godolphin duo of Walton Street (GB) (Cape Cross {Ire}) and Yibir (GB) (Dubawi {Ire}).

Also overdrawn by two is the GI Maker's Mark Breeders' Cup F/M Turf with 14 in the field and two on the outside. Audarya (Fr) (Wootton Bassett {GB}) is back to defend her title and is joined by six other Europeans. The Japanese have one representative and the rest of the field represents the home team, including GI Flower Bowl S. heroine War Like Goddess (English Channel) and GI Rodeo Drive S. victress Going to Vegas (Goldencents). Tarnawa is entered both here and against the boys with first preference being a title defense in the Turf.

Twenty-four horses were entered for the GI FanDuel Breeders' Cup Mile with 14 in the body and 10 outside. Eight of those are domestic runners and six foreign, including MG1SW Mother Earth (Ire) (Zoffany {Ire}). Defending winner Order of Australia (Ire) (Australia {GB}) was entered, but his retirement was announced later in the day. The Chad Brown-trained pair of Blowout (GB) (Dansili {GB}) and Raging Bull (Fr) (Dark Angel {Ire}) lead the American runners.

Grade I-winning “savage” Firenze Fire  (Poseidon's Warrior) looks to close out his career on a high note before moving to Japan for his stallion career in the GI Qatar Racing Breeders' Cup Sprint S. He will have his work cut out for him with the likes of MGISWs Dr. Schivel (Violence) and Jackie's Warrior (Maclean's Music); and GII Vosburgh S. hero Following Sea (Runhappy) signed on.

Gamine (Into Mischief) looks to defend her title in the GI Breeders' Cup F/M Sprint S. and will be heavily favored to do so facing just six rivals. Her top competition will likely come from fellow GI Longines Test S. winner Bella Sofia (Awesome Patiot) and MGISW Ce Ce (Elusive Quality), who was fifth in the Distaff last year.

Completing the nine Breeders' Cup races on Saturday's card is the GI Breeders' Cup Turf Sprint, which drew 19 entries. Wesley Ward saddles three of the 12 horses in the body of the field last year's GII Breeders' Cup Juvenile Turf Sprint S. winner Golden Pal (Uncle Mo), whose dam Lady Shipman (Midshipman) came up a neck short in this event back in 2015. He is joined by stablemates Kimari (Munnings), who has not been seen since winning the GI Madison S. back in April, and Arrest Me Red (Pioneerof the Nile), winner of the GIII Belmont Turf Sprint Invitational S. Oct. 2.

Undefeated MGISW Echo Zulu (Gun Runner) looks to complete a banner year for her freshman sire as the favorite in the GI Breeders' Cup Juvenile Fillies. She faces eight challengers, including Grade I winners Juju's Map (Liam's Map) and Ain't Easy (Into Mischief).

The GI Breeders' Cup Juvenile Fillies Turf drew a full field of 14 with four on the sidelines. Americans dominate yet again with eight of the entries, including GII Miss Grillo S. winner Sail By (Astern {Aus}) and GIII Matron S. heroine Bubble Rock (More Than Ready).

Rounding out the quintet of juvenile races is the only Breeders' Cup races that is not yet a Grade I, the GII Breeders' Cup Juvenile Turf Sprint. Wesley Ward has won two of the previous three renewals and has two chances to repeat in Averly Jane (Midshipman) and Twilight Gleaming (Ire) (National Defense {GB}). This race was also oversubscribed with 19 entries. Of the 12 that will make up the body of the race, it is an even split between America and Europe.