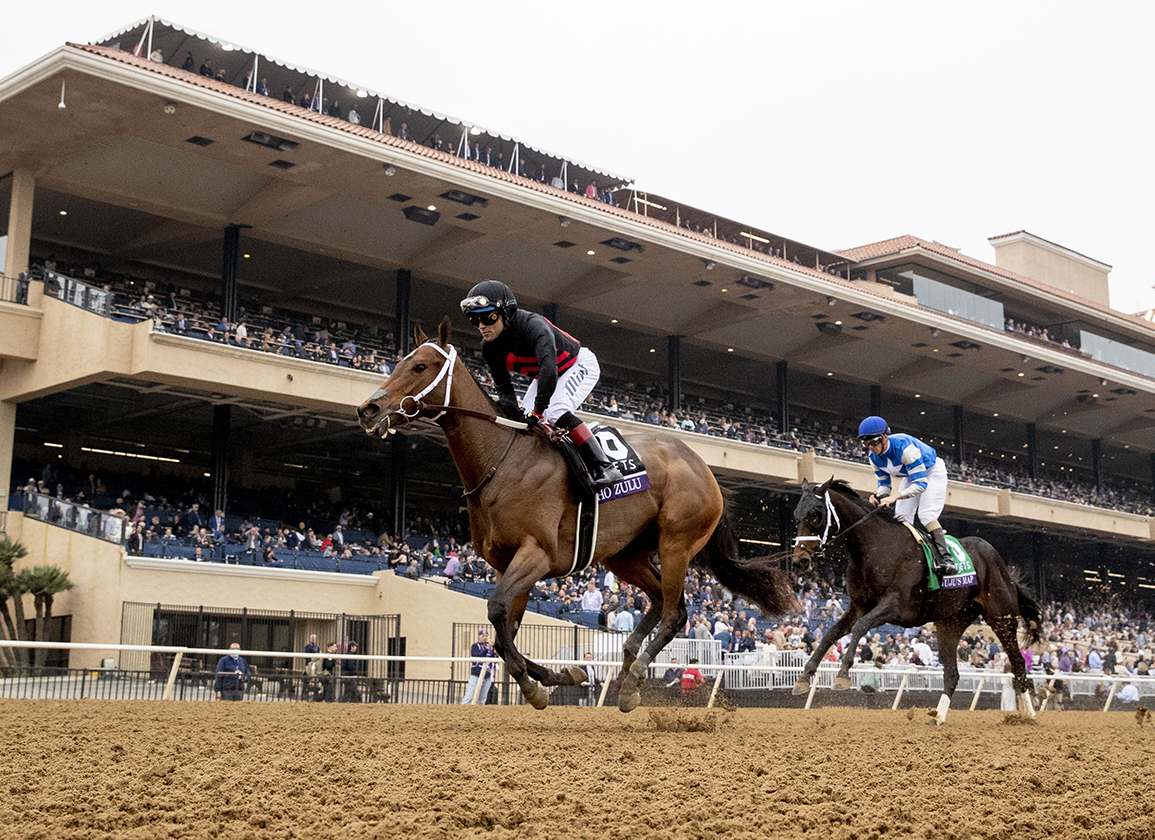 “A very special filly,” said Asmussen after saddling his second winner in the Breeders' Cup Juvenile Fillies and eighth overall at the World Championships. “She means so much to us, and the fact that she is from the first crop of Gun Runner, everything that he did for us, it's surreal that we're back here at Del Mar for the second Breeders' Cup when his crowning moment was the Breeders' Cup [Classic] here in 2017.”

He continued, “She's just brilliant. She's faster than they are. It's as simple as that. We're just so fortunate to be around her.”

Any similarities to her sire, the 2017 Horse of the Year?

“I think what we've seen, especially today, is how she carries [her speed], what a fluid mover she is and the middle fractions where Gun Runner just seemed to move so effortlessly and horses didn't stay at the same rate he did, that's how she seems to be in her races,” Asmussen replied.

On the engine beneath Joel Rosario while drawn widest of all in post six, Echo Zulu quickly cleared the field passing the stands for the first time and it was pretty much over from there. The 4-5 favorite clicked off sensible fractions of :23.42 and :47.01, began to give them the slip rounding the far turn and was handridden to a championship-sealing performance. The final time of 1:42.24 was a tick faster than the 1:42.50 final clocking established by fellow 'Rising Star' Corniche (Quality Road) later on the card in the Juvenile.

“She is amazing,” said Rosario after riding his 14th Breeders' Cup winner. “She is fast, has so much speed and it looks like she is not going that fast. Today, she liked what she was doing up there and when I asked her, she just took off. She's just amazing.”

Echo Zulu was making her two-turn debut while ridden by Rosario for the first time in the Juvenile Fillies. Ricardo Santana, Jr. piloted Echo Zulu to all three of her previous victories.

“It's something you always dream about when you have a horse like Gun Runner, and first crop getting a, what will be, a champion 2-year-old filly,” Ron Winchell said. “So for us to actually own it and what we did with Gun Runner like Steve [Asmussen] was saying it just makes it that much more special.”

“I'm still in shock,” Lee Levinson concluded with a laugh. “And I'm an attorney. I speak for a living, and I can't talk.”