Amidst Monumental Year, Asmussen Heads Into BC Weekend 'Guns' Blazing 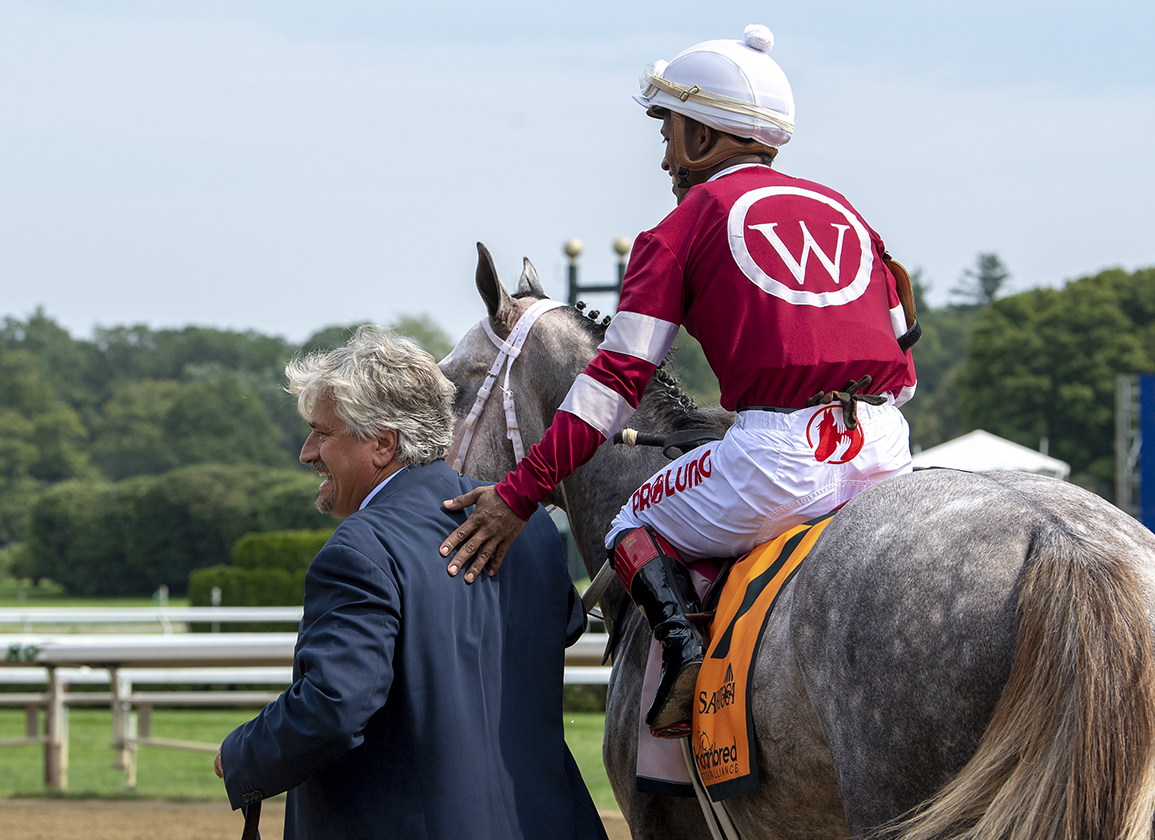 DEL MAR, CA – The best thing about Steve Asmussen's record-breaking 2021 season? The Hall of Famer may want to wait until the weekend is up to answer that.

In a year that has included passing Dale Baird to become the winningest North American trainer of all time, an emotional GI Arkansas Derby victory for his parents with Super Stock (Dialed In) and five top-level wins at the prestigious Saratoga meeting, including three from the first crop of a former barn superstar, Asmussen heads into the Breeders' Cup World Championships at Del Mar with a loaded, six-horse hand.

“Those are some very nice milestones and things that we will obviously enjoy looking back on, but we need to finish out the year strong,” Asmussen said.

“I feel like we have some excellent chances in the Breeders' Cup and we need to show up and have our horses perform to the best of their ability and finish the year off right.”

The $300,000 KEESEP graduate and half-sister to the Asmussen-trained GI Runhappy H. Allen Jerkens S. winner and young Ashford Stud sire Echo Town (Speightstown) will be heavily favored over five rivals for her two-turn debut off the strength of eye-catching wins in the GI Spinaway S. at Saratoga Sept. 5 and the GI Frizette S. at Belmont Oct. 30.

Standing at Three Chimneys Farm, the 2017 Horse of the Year and champion older dirt male is also responsible for the Asmussen-trained GI Hopeful S. winner Gunite. Gun Runner will also be represented by longshot Pappacap in the male dirt equivalent on 'Future Stars Friday.'

“It went extremely well the last time the Breeders' Cup was at Del Mar and we're trying to recreate some of the same magic,” Asmussen said. “We don't get to take Gun Runner back, but it is kind of fun that the first time we go back we have one from his first crop that's the favorite in the Juvenile Fillies.”

Of Gun Runner's fast start at stud, he continued, “It's dreaming. Meaning, Gun Runner, as special as he was and what an amazing ride he was–good 2-year-old, strong 3-year-old, great 4-year-old–then, how excited we were to have Gun Runner's progeny and for one to start out this fast… Better than we could've even hoped. Knowing how much better he got with time and for Echo Zulu to come out of the box like this–just absolutely special.”

Like his aforementioned celebrated quartet, Asmussen's 2021 Breeders' Cup troops arrived early in the Golden State to prepare, in fact, weeks ahead of the 38th World Championships. It's certainly worked well in the past, but exactly how important is it to get acclimated early to the West Coast?

“I think you said it, it's worked well in the past,” Asmussen said. “It's worked well for whatever reason. Just get acclimated and eliminate as many variables as we possibly can and go from there.”

A valiant fourth as the favorite after sitting right on a scorching pace in last year's GI Breeders' Cup Juvenile, he takes on his elders after a spectacular 110 Beyer Speed Figure performance in the GII Gallant Bob at Parx Sept. 25. He previously posted a heart-stopping neck victory over the GI Breeders' Cup Dirt Mile 4-5 morning-line favorite and 'TDN Rising Star' Life Is Good (Into Mischief) in a GI H. Allen Jerkens Memorial S. for the ages at the Spa Aug. 28.

Where does Jackie's Warrior, just a $95,000 KEESEP buy, rank with some of Asmussen's all-time top sprinters–dare we even mention the brilliant Mitole yet?

“I think that they're all individuals and comparing horses is unjust,” Asmussen fired back. “Because what makes them special is how they perform against competition, not talking about it. We have had the fastest horses in the world and are very proud of that.”

“I think the most unique thing about Jackie's Warrior is the Gallant Bob was only the second time he had run six furlongs,” Asmussen said. “He's just fast.”

George Hall's and SportBLX Thoroughbreds Corp.'s GI Breeders' Cup Classic contender Max Player (Honor Code) has taken his game to the next level with a change in tactics, sitting right on the pace en route to breakthrough wins in the GII Suburban S. at Belmont July 3 and GI Jockey Club Gold Cup S. at Saratoga Sept. 4. He rallied from far back to third-place finishes in the 2020 GI Belmont S. and GI Runhappy Travers S. for previous trainer Linda Rice as well as a fifth-place finish in the GI Kentucky Derby in his first start for this stable.

“He was giving himself too much to do in quality races,” Asmussen said. “Spotting them seven, eight, 10 lengths-he put himself in a position that it was hard to show his ability. In the mornings, he was showing plenty and enough that with an opportunity, he could do enough with it. Getting him in the race early has allowed that. He stays well, so using some of him early hasn't cost him late and it's given him a chance.”

Stonestreet homebred Clairiere (Curlin), the first foal out of the talented three-time Grade I winner and 2015 GI Breeders' Cup Filly & Mare Sprint rallying fourth as the favorite Cavorting (Bernardini), faces older fillies and mares for the first time in the GI Breeders' Cup Distaff. She headed an exacta for her leading sire and former Asmussen-trained two-time Horse of the Year Curlin in the GI Cotillion S. at Parx Sept. 25. She was also second to the ultra-talented, re-opposing 'TDN Rising Star' Malathaat (Curlin) in the GI Alabama S. Aug. 21.

Asmussen will be double-fisted in the GI Breeders' Cup Dirt Mile. Listed as the second choice on the morning line at 7-2, GI Hill 'n' Dale Metropolitan H. winner and $450,000 KEESEP graduate Silver State (Hard Spun) overcame a slow start and looked well on his way after leading in the stretch, but just couldn't close the door and had to settle for a close second in the Parx Dirt Mile S. last out Sept. 25. The Winchell Thoroughbreds and Willis Horton Racing colorbearer, did, notably earn a career-best 104 Beyer in that effort. Silver State retires to Claiborne Farm for 2022.

“It's the goal,” Asmussen concluded of the year-end Championships. “We're obviously very fortunate to have horses of this level. We would expect them to perform well. It is the target.”