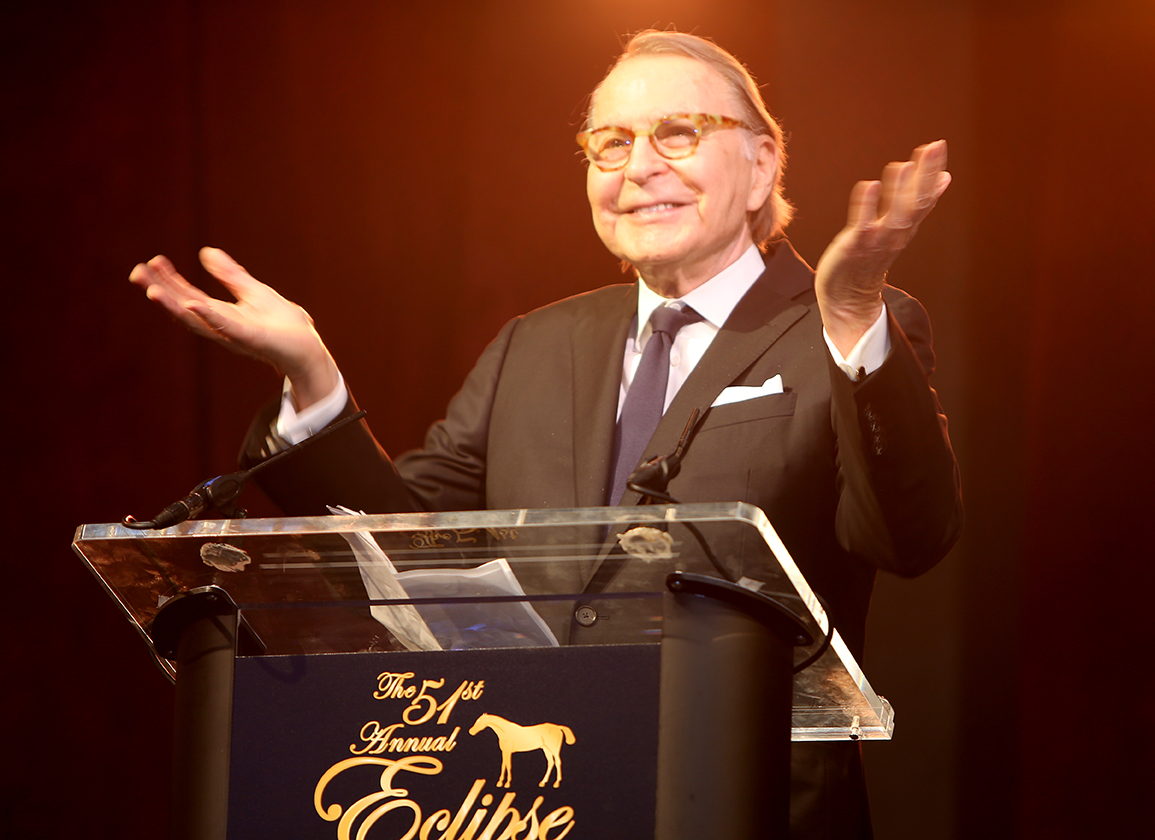 Owner, breeder, humanitarian, and philanthropist Earle Mack was bestowed with the William T. Young Humanitarian Award by the Kentucky Thoroughbred Owners and Breeders (KTOB) Wednesday morning. The former U.S. Ambassador, who has been breeding and racing Thoroughbreds for nearly six decades and has had 25 black-type winners, including Canadian Triple Crown winner Peteski (Affirmed) and U.S. MGISW November Snow (Storm Cat), is well known for his humanitarian work, both in the industry and in the greater world. A long-time supporter of numerous equine charities and a strong proponent of Thoroughbred aftercare, Mack also founded the Man O' War Project, which studies and uses equine-assisted therapy for veterans suffering from PTSD. Last month, he led a delegation to help Ukranian refugees on the border with Hungary.

The William T. Young Humanitarian Award was established by the KTOB in 2003 and honors a person who positively affects people in the Thoroughbred industry, as well as throughout the Commonwealth of Kentucky. It is voted on by the KTOB's Board of Directors and recognizes someone associated with the racing industry who “promotes the human endeavor,” according to KTOB's website.

In his acceptance speech, Mack commented on the Horseracing Integrity and Safety Act (HISA), called for an industry change from dirt to cushion surfaces, and stressed the need to protect racehorses.

“I would like to comment on the state of our industry and our continued mission to address the health, safety, and welfare of our beloved Thoroughbreds,” said Mack. “Everyone in this room prizes and loves the Thoroughbreds for their hearts, their athleticism, and their beautiful extensions, which touch our very souls. Let's protect them for all they give to us and all they mean to us. Recently we've made enormous strides towards ensuring the integrity of our industry through the passage of HISA. It took almost 10 years–from conception to passage–which, as you all know, was a major undertaking. But even with the safeguard of HISA, there is more work to be done to satisfy public opinion, our industry, and ourselves that we are doing everything possible to ensure the health, safety, and welfare of our equine athletes.

“It's no secret that organizations like PETA and other animal welfare groups would like nothing better than to shut down horseracing as a sport and they've come damn close in California! These groups are fueled by injuries, breakdowns, and mortalities at our racetracks. Knowing this, we need to do everything we can to have the safest racing surfaces in the world. I would like to put forth the bold and necessary challenge to our industry to transition our dirt surfaces to cushion surfaces within the next 7-10 years. We have the technology and the brightest minds in the business to accomplish this.

“Such a measure would cut racetrack injuries in half and could very well ensure our future and our long-term sustainability.”

Mack is an Army veteran who, in addition to his racing and military achievements, has a long list of accomplishments in business, government, and the arts. He has long advocated for the safety and wellness of Thoroughbreds. In February, Mack was awarded the Eclipse Award of Merit in recognition for a lifetime of outstanding achievement.