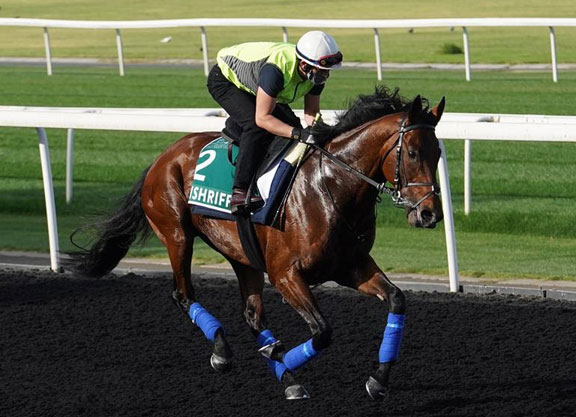 Less than a week remains before the $26.5-million Dubai World Cup card, split between eight Thoroughbred races and one for Purebred Arabians. Horses were out in force over the Meydan track on Monday morning, with several turning in final works prior to the big night.

Most of the $12-million G1 Dubai World Cup hopefuls completed maintenance works on Monday, but one of the American contenders-Jesus' Team (Tapiture), runner-up in the GI Pegasus World Cup Invitational S. on Jan. 23–galloped 1 1/2 circuits.

“We went to the track with him very early, because I want him to know the lights when we're going to run,” said trainer Jose Francisco D'Angelo, who was the champion trainer in Venezuela in 2018. “It will be his first time running under the lights. Jesus did it perfectly. The horse is 100%. He loves Dubai, the weather, the water and the environment. I think he's ready with that last work at Palm Meadows over seven furlongs under his belt.”

“He did a two-minute mile and finished the last half a mile very strongly,” said trainer Miguel Angel Silva. “He went beautifully. I really liked it. Today was the last day of working. From now on, we just wait for the big race.”

“We just wanted something easy in :49 or :50 seconds and that's what we got,” assistant trainer Marcelino Jacuinde said. “Pedro Velez was on him, who was here the last two times in Dubai and he rode him last week before we came here.

“I thought he went just the way we wanted. He was nice and easy. We'll walk him tomorrow and come back to the track the next couple days.”

“He comes from a really hot stallion and he has been unlucky in quite a few races,” Mora said. “He's doing very well and we'll try to get the points to be in the Kentucky Derby in the USA. I think the 1900m distance is an advantage for him and will help him.”

Ambivalent will have plenty of competition in the Derby, with 2021 Saudi Derby hero Pink Kamehameha (Jpn) (Leontes {Jpn}) set to line up among others. Hideyuki Mori's work rider Masaki Takano was bullish on his horse, who cantered 1 1/2 laps on the dirt track on Monday morning.

“Everything about him let us know he is a very healthy horse and keeps good form,” said Takano.

“Mishriff has done well, he's happy and fresh,” said Thady Gosden. “He's obviously been to Saudi and back and taken the travelling well. He's a straightforward horse and, given he went from the cold at home to Saudi and then came back to the cold, he has taken it all very well.

“He's very versatile and obviously a mile and a half (2400m) will be different but it's a lovely galloping track at Meydan and Saturday will give us a pointer for the rest of the season.”

Of Lord North Gosden added, “He was fresh going around the track this morning, taking everything in, and seems to have travelled well. He came out last year when the meeting was cancelled due to Covid but he's been in similar form at home so we thought we'd bring him out.”

“He [New treasure] travelled over well and we'll take him out on the dirt track during the week,” added Gosden. “He ran well on his first start for us in Saudi Arabia and has earned his place in the UAE Derby.”

Edward Bethell's Moss Gill (Ire) (No Nay Never), who is preparing for the $1.5-million G1 Al Quoz Sprint, cantered on the training track on Monday morning.

“I'm very happy with the way he's travelled,” said Bethell of his 2020 G1 Nunthorpe S. third. “We were all quite concerned because he's never been further than Lingfield in his life, so to come to Dubai was quite a challenge. He's taken it all in his stride. He's eating well now and he was very happy on the track this morning.

“He just did a very steady canter and he doesn't need an awful lot of work. He takes very little training just as long as he's fresh and happy and well. That's the main thing.”

Graham Motion trainee True Valour (Ire) (Kodiac {GB}) is another Al Quoz contender and worked three furlongs over the turf on Monday morning. Assistant trainer Cat McGee was on hand to observe the work. The 7-year-old was second last out in the GII Joe Hernandez S.

“He went in :38, between the cones which are set on the outside rail. He seemed to enjoy the turf. He did it within himself and he was feeling good after. I was hoping to take him on the turf again for a gallop maybe Thursday. But he will be going around the dirt track the other days.”